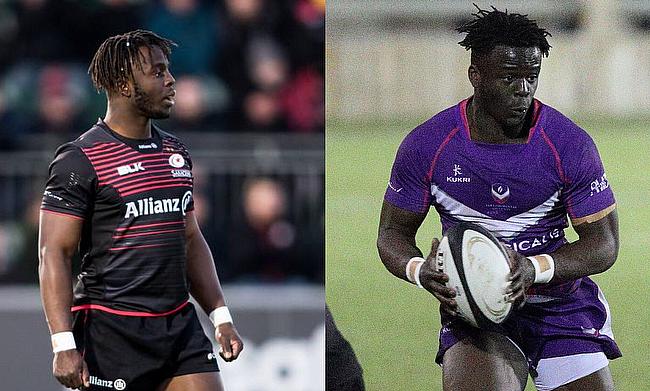 The emerging talent at Allianz Park has recently made his debut in the Aviva Premiership. Photo Credit: Adedapo Segun.

Saracens winger Rotimi Segun admits getting involved with National League and university rugby is a brilliant opportunity for players to showcase their abilities.

The rising star at Allianz Park, who has featured in National One for Loughborough Students and Old Albanian in recent years, has had a breakthrough few months after making his debut in the Aviva Premiership.

Following some impressive performances in the A-League and the Anglo-Welsh Cup, Segun was handed his first ever appearance in English rugby’s top division as he came off the bench in Saracens’ 28-20 loss to Leicester Tigers at the end of February.

The 21-year old also tasted the atmosphere of Sandy Park as he featured against the Exeter Chiefs at the start of March and the former England U20 international admits his experiences at both both university and the National Leagues have helped him improve as an individual.

“Playing university rugby is such a good platform to show what you can do,” he told the NCA.

“There is not a lot of pressure on you to perform and it is all about developing as a player. There was a really good emphasis on that at Loughborough.

“It has worked out pretty well for me so far and a few of the other boys have gone on to play Championship rugby and even internationally, so going to Loughborough has been a great step for me.”

Segun is now in a world which involves training with the likes of Liam Williams, Owen Farrell and Maro Itoje and whilst he admits balancing a degree at Loughborough with life at Saracens is tough, he cannot fault the environment he currently finds himself in.

Excited to be involved for the first time ?? https://t.co/eT0wtppk0f

“It is a lot more compact, but you are in such a good environment and the standard is raised so high.

“Studying is difficult! I get back from training and you’re pretty tired and some of the boys may not be doing as much as you, but sometimes you have just got to get your head down and crack on. At the end of the day, I want to do the best I can in my degree so I want to put the hard work in.”

Whilst Segun puts in the graft away from the field, his dedication and determination on the pitch for Sarries since his first team debut in January 2017 has not gone unnoticed as he recently signed an extension to his deal which will keep him at the current European Champions until 2019.

Segun is one of the latest academy products at Saracens to take their chance in the first XV and he is looking forward to what the future has in store for him over the next couple of years.

Now he's got the taste for it, @RotimiSegun can't wait for more game time. ? https://t.co/KGlap2RYcj pic.twitter.com/F4vkv7TL8p

“It has been pretty surreal! You are playing against the likes of Manu Tuilagi and Henry Slade. I have grown up watching them on TV and next thing you know, you are up against them. It was a great experience.

“Now, I am just going to try and keep staying involved and do the best for the team. At the end of the day, what I want to get out of it myself is just helping the team in any way I can. I want to play my role and hope I can play a part in winning a couple of trophies in the future.”