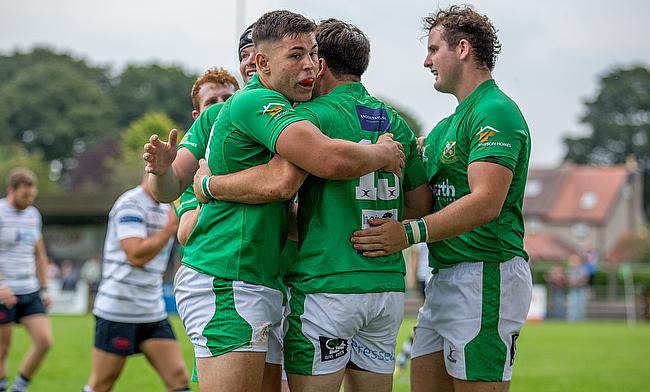 The mood ahead of the start of the National League Rugby season was one of anticipation and Round One certainly delivered some eye-catching results and performances. Photo Credit: (John and Ro Burridge)

Hull’s start to life in National One wasn’t what they would have been hoping for as Bishop’s Stortford ran in seven tries to record a 44-20 bonus-point win over the newly-promoted side.

The Yorkshire outfit also had Cameron Curry sent off shortly after the interval on a tough afternoon for Gary Pearce’s troops.

Following the dismissal of Curry, Jake Morris scored two second half tries for Stortford as the hosts were able to take the game away from their visitors.

Other scores from Charlie Parkhouse, Will Roberts, James Thacker and Josh Stannard, along with a penalty try, secured a comprehensive win.

Joe Carlisle, Harvey Harding and Will Hall all went over for Hull.

One of last year’s title candidates, Rosslyn Park, also begun the new campaign with a maximum as they defeated Cinderford 46-26 at The Rock.

Kieran Power’s men were dealt setbacks during the course of the afternoon as the home side received three yellow cards, but they still had enough to secure an opening day triumph.

Aaron Ryan’s score kept Cinderford in touch going into the break, but a penalty and a converted try from Craig Holland gave Park a cushion.

Back came Cinderford through a Tim Andrew try but even though Holland pinged over his second three-pointer of the day, a penalty try for the Foresters cut the deficit to 10 points heading into the final quarter.

But despite Rosslyn Park having to battle through periods with 14-men, Tom Stanton and then Ben Howard made sure of the win with tries in the final four minutes.

Sale FC – inspired by winger Sam Adu – Rams RFC and Cambridge all picked up bonus-point victories in Round One while Taunton Titans left it late against Leeds Tykes and Darlington Mowden Park also had a winning start as they beat Chinnor 23-16 in the North East.

Rotherham Titans delivered a very early indication of their ambitions for this season as they cruised past Harrogate to seal a 67-15 victory.

After challenging for top spot last term, the Titans crossed on no less than nine occasions at Clifton Lane. In the opening exchanges, Richard Hayes and Jack Taylor both touched down before Rory MacNab hit back for Harrogate.

Jacob Garrett and Tom Steene gave the visitors something to smile about with a try apiece, but Sam Boxhall and Kai Ramrattan put the icing on the cake in the last knockings of this contest.

Over in North Yorkshire, Wharfedale also dazzled on the opening day as they claimed a 57-18 triumph over newly-promoted Preston Grasshoppers.

Matt Beasley got the ball rolling for the home side before Harry Bullough, Sam Dickinson and Oscar Canny all grabbed themselves a brace at The Avenue.

Josh Burridge and Sam Gaudie also got in on the action for the Greens while Preston had tries from Will Clapham and Scott Richardson.

One of the other teams back at level four, Otley, also suffered a defeat in Round One as Sedgley Park, spurred on by hat-trick hero Danny Maher, clinched a 38-15 win while there were also bonus-point successes for Hull Ionians, Fylde and Tynedale.

Elsewhere, Jamie Broadley, Angus Hughes and Louis Townsend all went over in Sheffield Tigers’ 20-15 away win at Huddersfield.

After relegation from National One in 2021-22, Blackheath began the new National Two East season with a 29-10 victory against Dorking, who are back at level four for the first time in six years.

‘Club’ had to fight hard for this win as Paul Schroter and Harry Holland crossed either side of Toby McRae’s effort for the newly-promoted visitors.

Nick Foster increased Blackheath’s advantage in the second period, and the home side were able to relax in the final quarter after efforts from Andy Denham and Jake Lloyd sealed the win.

It wasn't the same without Albert of course but the boys did you proud. Fantastic game and our thanks to Dorking and their supporters for creating such a great atmosphere on Saturday.#blackheathrugby #loveit pic.twitter.com/zl3CBpRupW

There were certainly positives for Dorking to take from their visit to Well Hall, but it was an even better afternoon for fellow newcomers Sevenoaks who recorded a 29-12 victory at Westcliff in their first-ever fixture in the National Leagues.

Brandon Thompson, Scott Sedgwick and Jonny Short were amongst the scorers for Adam Bowman’s men who will host the aforementioned Blackheath in Round Two.

Canterbury and Rochford Hundred both got off to perfect starts with excellent wins over North Walsham and Tonbridge Juddians respectively, while a blistering first half display from Barnes saw them see off Worthing Raiders 34-21 in one of the results of the opening weekend.

Old Redcliffians made an efficient start to life back in National Two West as they beat Newport (Salop) 58-14 at Scotland Lane.

Like their hosts, Newport also gained promotion to the National Leagues last term but this was not the start the Shropshire outfit would have  envisaged.

Old Reds scored four tries before the break with Ezra Caven bagging a hat-trick and his fellow wing Finn Murphy also scooting over.

The home side added another four tries in the second half as Jonathan Cook, Will Luxford, Caven and Jamie Collier completed the rout. The highlight for Newport was a double from Tristian De Jager.

After getting to within touching distance of promotion in 2021-22, Redruth flew out the blocks on the opening day of this season thanks to a 43-8 win over the 14-men of Stourbridge.

Nigel Hambly’s team fought to the very end for the National Two South title last year, but they made their intentions clear in Round One as they capitalised on Chad Thorne’s red card on 33 minutes.

By that point, Dean Bonds, Will Trewin and Jack Simmons had all scored but after the Stourbridge prop departed the field, the Reds tightened their grip.

Richard Brown and Todd Prisk went over either side of half-time before Kyle Bradley rubber-stamped the victory. Dallas Ororo did go over for Stour, but this was a difficult first outing for Neil Mitchell’s charges.

Dings Crusaders and Leicester Lions both ended the last campaign very strongly and they picked up from where they left off following victories over Luctonians (29-17) and Hornets (28-17) respectively.

It was dream start to their adventure in National Two West for Exeter University who defeated Barnstaple 31-23 whilst elsewhere, a hat-trick from Fin Sharp helped Clifton pick up a tight 31-28 bonus-point win over Loughborough Students and it was also a narrow success for Hinckley as they edged past Bournville 20-19 in the Midlands.

Like and subscribe to our YouTube channel to watch The National League Rugby Review Show. You’ll be able to see the best tries and biggest moments from Round One all in one place…