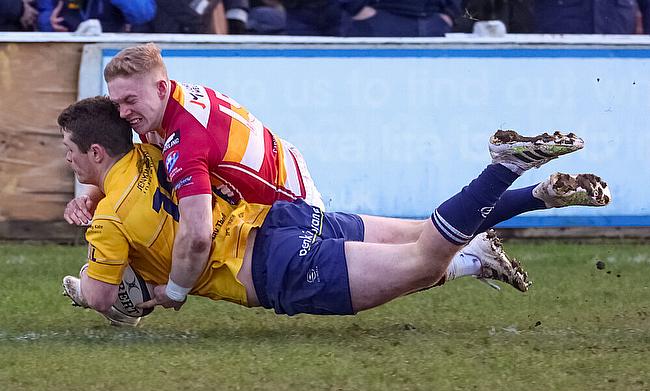 The fixture list has thrown up a unique weekend of National League Rugby, especially in National One where both ends of the table could look completely different come Saturday evening. Photo Credit: (Gareth Lyons)

The ‘Rest Week’ may have fallen at the perfect time in National One. Yes, the season was just starting to generate some momentum and teams were beginning to settle into their groove, but on the flip side, it has allowed tired bodies to rest, coaches to fine-tune their tactics and it has also let the excitement simmer away ahead of a fascinating Round Six.

Let us paint the picture. Four of the top five teams face one another this Saturday afternoon and the same theme applies at the wrong end of the table with four of the bottom five colliding. There is still an awful lot to play for and the outcome of this weekend is unlikely to shape the rest of the campaign, but surely we are allowed to hype up the narratives littered across the league?

Fourth-placed Sale FC travel to Cinderford (5th) with both sides level on points, but the clash between league leaders Rams RFC and Cambridge (3rd) pits two sides together who have 100 per cent records to their name. Rams’ attacking verve has been on show in the opening five rounds and their emphatic win over Darlington Mowden Park last time out means they top the pile as things stand.

But anyone connected to Seb Reynolds’ side will tell you welcoming Cambridge to Old Bath Road will be their toughest test to date. The Blood and Sand will arrive in Berkshire with a spring in their step not only because they have made a flying start, but because they beat fellow promotion candidates Sale FC two weeks ago. That triumph may well have turned a few heads but if Richie Williams’ charges were to repeat the same achievement on Saturday – especially with the aforementioned Cinderford and second-placed Rosslyn Park (who travel to Darlington Mowden Park this weekend) to come before the end of October – then who knows where the men from Volac Park can go this season.

An insight into the high-flyers' recent form, historical clashes, players to watch and more! pic.twitter.com/MROGXW1Xfd

If our first highlighted game of Round Six wasn’t enough to whet your appetite, why not turn your attention to Surrey where Esher take on Taunton Titans. While it is far too early to throw in phrases such as ‘relegation battle’ or ‘a scrap for survival’, it is a fixture which allows both clubs to light the fuse on their respective seasons.

Taunton enter this weekend on the back of three straight defeats against Cambridge, Sale FC and Cinderford so with that in mind, Tony Yapp’s boys may try and find some inspiration from their only win thus far which came against Leeds Tykes on the opening day of the campaign.

Currently, the Titans occupy a place in the bottom three but directly below them are Esher. Peter Winterbottom’s side will be keen to record their first win after losing all five of their fixtures on their return to National One.  However, their two home matches against Rosslyn Park and Leeds Tykes both ended in narrow defeats so will it be third time lucky for the EEEs on their own patch?

Propping up both Taunton and Esher are Hull. The newly-promoted side are still yet to register their first-ever third-tier win but may have a chance to break their duck against a Leeds Tykes outfit who sit two points and two places above the dotted line. In fairness, Jon Callard’s troops did enter the ‘Rest Week’ following successive wins and a slice of that consistency is what Chinnor (11th) will be craving when they host Plymouth Albion.

Elsewhere, Bishop’s Stortford take on Birmingham Moseley at Silver Leys with both teams aiming for a third win of the season.

Rotherham Titans (3rd) vs league leaders Fylde. Again, we are only in October but you can’t really play down this fixture.

If Fylde’s perfect start to the season needed to be scrutinised, then Clifton Lane might be the perfect place to do just that. The Titans have won four of their five games this term and sit four points behind the current table-toppers. In fact, Rotherham haven’t lost on their home turf since March 2020 so that is the challenge which awaits their Lancashire visitors.

However, it will be one Chris Briers and Alex Loney’s side will be relishing. Fylde are the only club in the division with five successive bonus-point victories under their belt and they have scored 34 tries in the process. The men from Woodlands also beat Rotherham back in January when both sides were in the title conversation and nine months later, the quality is still there for all to see. Those who head to South Yorkshire this weekend should be in for a treat.

Sandwiched in-between the two clubs are Sedgley Park, who may have one eye on proceedings when they travel to Blaydon while Hull Ionians – fresh from last week’s success against Otley – host Huddersfield, Wharfedale entertain Tynedale and Chester welcome Otley to Hare Lane.

Elsewhere, Harrogate – who got off the mark in Round Five – take on a Sheffield outfit enjoying their return to level four while city rivals Sheffield Tigers travel to Lightfoot Green to face Preston Grasshoppers in The National League Rugby Review’s Show Key Game.

It is just over an hour, door to door, between Blackheath Rugby Club and Old Albanian RFC but as we enter Round Six, just one place and one point separates the sides. In recent seasons, the two clubs have been divided by a whole division – with OAs dropping into the old National Two South in 2018 – so this weekend’s clash at Woollams will be the first meeting for over four years.

Blackheath will be keen to continue their blistering start to life in the fourth tier having collected bonus-point wins from all four of their matches so far. If results go their way this weekend, the league leaders could create some daylight at the top of the standings but OAs are well equipped to stop ‘Club’ stealing a march on the chasing pack. The hosts have clearly forgotten about their chastening defeat to Henley Hawks in Round Two having stitched together a run of three successive wins so the second-placed side will be heading into Saturday with the belief that they can end Blackheath’s pristine start.

Meanwhile, Rochford Hundred entertain Sevenoaks and Westcliff’s trip to Guernsey Raiders presents the chance for both teams – who are currently in the bottom three – to secure a welcome victory.

National Two West table-toppers Dings Crusaders can be delighted with their opening five rounds of the season. Derby day wins and key victories against early promotion candidates Clifton, and most notably Leicester Lions, leaves the Bristol-based side in pole position heading into the second block of fixtures.

One defeat from their last 15 games in National League Rugby has been mightily impressive and on paper, they will be favourites to dispatch a Barnstaple side who currently prop up the division. The visitors to Shaftesbury Park on Saturday will be eager to add to their only victory of the term – which came away at Hornets in Round Two – and in fact, all five points they have garnered thus far have come on the road. Can the Chiefs upset the odds and make life difficult for the league leaders in Round Six?

There is also a similar storyline when Clifton (3rd) travel to second from bottom Bournville with both sides gunning for different goals whilst elsewhere, Leicester Lions (2nd) will be keen to return to winning ways when they visit Old Redcliffians and fourth-placed Exeter University will also want to taste victory when they take on Hornets.

Also across National Two West this weekend, Hinckley – who have lost just once this term – face Midlands counterparts Stourbridge, Redruth and Luctonians collide in Herefordshire and Loughborough Students go to Newport (Salop).