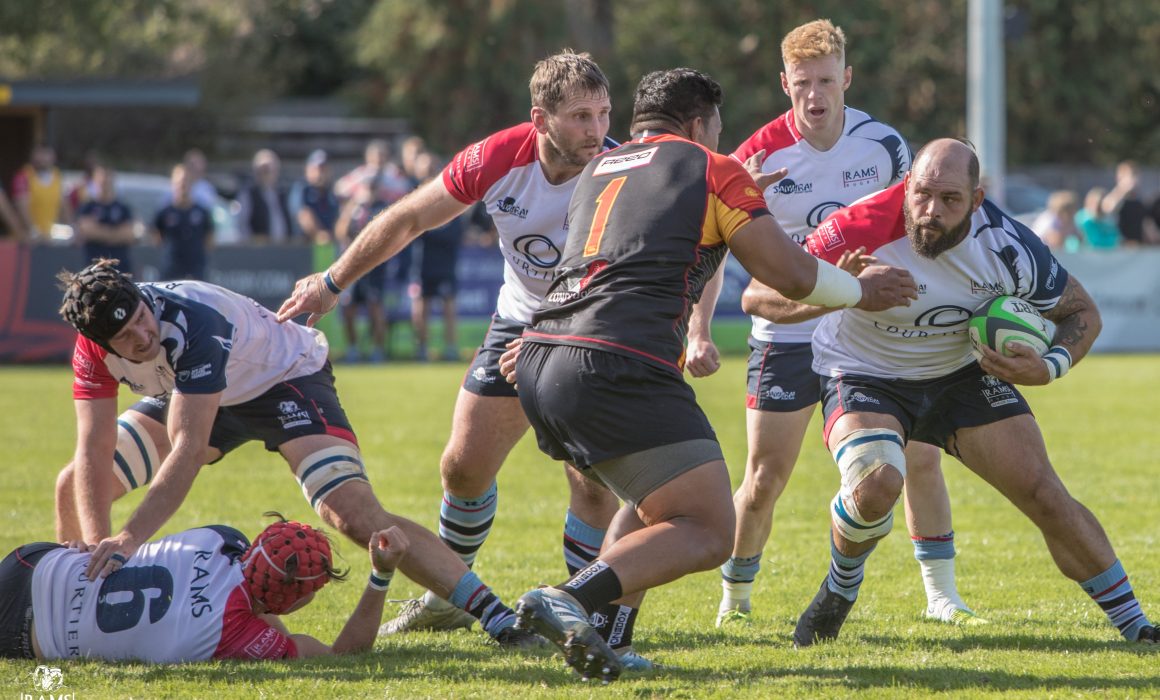 Long may the excitement of National League Rugby continue. Levels three and four refuse to pass by quietly after another entertaining weekend of action. (Photo Credit: Paul Clark)

Ducker’s second came shortly after the break to stretch Albion’s lead, but a third from Edwards on the hour cut the gap to four points with 20 minutes left.

And the current National One table-toppers completed the turnaround when Callum Morris touched down to seal a third bonus-point win in succession for Jonathan Keep’s men.

While Sale continued their perfect start, Birmingham Moseley opened their account for the 2022-23 season as a blistering spell at the beginning of the second half helped them to a 35-24 win over newly-promoted Esher.

The EEEs led 14-10 at half-time against their Midlands hosts thanks to tries from Pierre Thompson and Theo Skoumbourdis, with Sam McNulty crossing for Moseley.

However, the home side exploded into life after the interval as Oliver Stedman scored two tries while Sam Pointon also darted over to put Adam Balding’s charges 32-14 in front.

Esher fought back impressively through Andrew Hamilton and Ben Robbins to set up a nervy final 10 minutes at Billesley Common, but a late penalty from Ben Palmer – which took his individual tally to 15 points – clinched Moseley’s first victory of the campaign.

Back towards the top, Jak Rossiter scored four tries as Rams RFC maintained their 100 per cent start to the season with a thumping 59-26 win over Hull, Rosslyn Park made it three victories from three after defeating Chinnor 42-14 in a fiery contest on Friday night and Cambridge also picked up maximum points for the third weekend in a row following a 39-14 success against Taunton.

Also in Round Three, Darlington Mowden Park’s unbeaten start to the term came to an end against Bishop’s Stortford. The North East club had David Fisher sent off on the hour and despite going ahead with seven minutes to go, Dan Cole’s late penalty snatched a 25-24 triumph for the visitors. Elsewhere, Cinderford beat Leeds Tykes 24-12 on their travels.

Fylde ran in a whopping 12 tries to thrash Harrogate 74-5 and move to the top of National Two North.

Harrogate’s only score came in the second period through Will Yates, but this was Fylde at their free-flowing and ruthless best.

Sedgley Park were also taking no prisoners in their Round Three clash as they romped to a 50-8 victory over Preston Grasshoppers.

Sedge’s strong start to the new campaign continued as Rhys Henderson and Andy Riley both scored twice, while Ben Black’s try was arguably the moment of the National League Rugby weekend.

After a penalty was awarded to The Tigers, fly-half Steve Collins shaped to put the ball into the corner. However, his clever dink was latched on to by Black who dotted down as Preston were left bamboozled by Sedge’s creativity.

Connor James, Valu Tane Bentley and Matt Riley also went over for the home side while Preston’s only highlight came via Sam Gale.

Tynedale and Hull Ionians also made it three wins out of three on Saturday. Rob Parker scored a hat-trick for the North East outfit in their 41-34 success against Sheffield Tigers while the I’s ended Wharfedale’s perfect start with a 20-13 win at The Avenue.

Also across Round Three in National Two North, Lloyd Hayes scored 25 points as Rotherham Titans hammered Blaydon 50-3, Matthew Adcock’s late score ensured back-to-back victories for Sheffield as they beat Otley 20-18 and Chester battled back from a slow start to defeat Huddersfield 23-17 and claim their first triumph of the season.

Barnes remain on top of National Two East, but they suffered their first defeat of the campaign after losing 26-25 to Dorking in a thriller in front of the National League Rugby Review Show cameras.

Barnes had surged into a 20-7 lead before half-time as Paul O’Dell (2), Jordan Souter and Will Lewin crossed for the hosts.

But tries from Jonathan Ellis and Austin Emens – which added to James Catton’s first half effort – saw Dorking flip this contest on its head as they held a one-point advantage.

Cameron Roberts then latched on to a delicate kick through from Josh Davies to put Barnes back ahead, but the visitors would have the final say as Finn Osbourne burrowed his way over from close-range to steal it at the death.

It was a lot less dramatic for Canterbury who bounced back from last week’s defeat to Tonbridge Juddians by beating an indisciplined Westcliff 34-14 at The Gables.

The City Men punished yellow cards shown to Jack Hogarth and James Scoggins as Guy Hilton and Nathan Morris went over before David Irvine and Will Waddington wrapped up the bonus-point.

Finlay Doyle was the next Westcliff player to be sent to the sin-bin, but the hosts rallied to get on the board through Hogarth. However, tries from Harry Andrews and Waddington – either side of Bradley Robbins’ converted effort – rubber-stamped the win for Canterbury.

Elsewhere, Old Albanian secured back-to-back away wins after beating North Walsham 31-14 and Worthing Raiders recorded their first victory of the campaign thanks to a 32-27 triumph against Sevenoaks.

The duo went over in the first half, but Newport had their noses in front at the break with tries from George Boughey and Jacob Leonard (2).

However the Lions, who haven’t tasted a league defeat since March, surged clear in the second half as Devon Constant, Nick Cairns, Tom Williams and Ed Sumpter touched down as the home side scored 31 unanswered points.

Exeter University continued their fine start to life in National Two West as they powered to a 37-17 bonus-point win against Loughborough Students.

Tries from Tom Harris, Ben Joseland and Josh Barton put Exeter into a 19-10 half-time lead, with Mink Scharink and Joe Plunkett going over for the hosts.

After Ben Hammersley had pinged over a penalty for Exeter, Harry Rowson’s 61st minute try cut the gap but the away side were able to grab hold of proceedings in the final quarter.

Dings Crusaders are also on maximum points as they survived a late revival from Old Redcliffians to seal a 32-27 derby victory at Scotland Lane.

Elsewhere, Redruth and Clifton returned to winning ways in Round Three. The Reds came out on top 41-31 in an entertaining encounter with newly-promoted Hornets, while Alex Howman scored a hat-trick as Clifton hammered Stourbridge 59-19.

Meanwhile, Luctonians recorded back-to-back wins with an 18-3 triumph away at Bournville and Hinckley defeated Barnstaple 45-17 at Pottington Road. Referee Lloyd Davies dished out four yellow cards in the final 12 minutes of this contest as well as sending off Barnstaple’s Daniel Johnson.