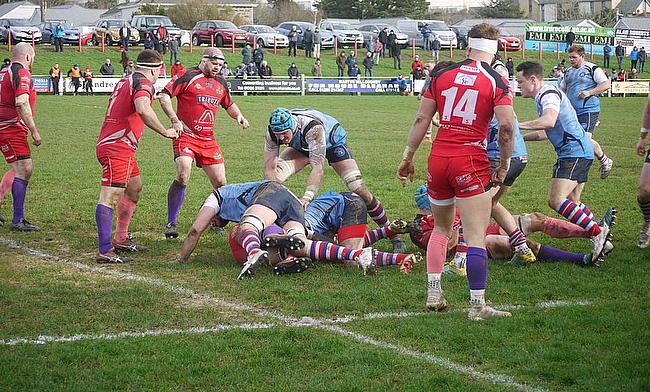 There were many sporting fixtures which fell foul to Storm Ciara over the course of the weekend, but thankfully, the National Leagues weren’t affected and good job too, as Round 22 provided us with some excellent action. (Photo Credit: Tonbridge Juddians)

In National One, there were numerous high-scoring affairs with one occurring at the Athletic Ground as league leaders Richmond moved a step closer to the Championship with an impressive victory over Rotherham Titans.

Over in National Two North, table toppers Caldy reached the 100-point mark following their 21st consecutive victory of the season whilst there were also important wins for teams embroiled in the relegation fight.

Meanwhile in National Two South, the race for a top two finish has sparked into life as wins for both Taunton Titans and Redruth have changed the dynamic at the summit.

Below is a more in-depth review from Round 22:

Round 22 in National One failed to throw up any real surprises, especially towards the top of the division, as league leaders Richmond beat Rotherham Titans 52-20 to remain seven points clear.

Steve Hill’s side underlined their ambition to make an immediate return to the Championship by scoring seven converted tries as they outplayed the Titans at the Athletic Ground.

Rotherham did rally to secure a potentially vital bonus-point in their fight for survival as Jamie Cooke (2) and Sam Allan both crossed in the final 15 minutes to add to Ben Robbins’ first-half score.

Rosslyn Park are still the nearest challengers to Richmond following their 31-19 victory against Birmingham Moseley.

A wonderful team try to kick off your #MondayMorning

Joe Munro cut a great line to open the try-scoring for Park and the visitors took control as Stewart Maguire, Ben Howard and Arthur Ellis all went over in the first period.

Mason Tonks’ score reduced the deficit for Moseley before Cliffie Hodgson crossed to breathe new life into the game for the hosts.

However, Tonks’ second try nine minutes from time was as good as it got for the Midlands club, who are now 11 points clear of the drop zone.

In terms of the teams in the bottom three, relegation is edging closer for both Hull Ionians and Canterbury as they both suffered heavy defeats in Round 22.

The I’s were beaten 58-10 by Cinderford in Yorkshire whilst Canterbury lost 64-14 away at Darlington Mowden Park. Both sides are now 32 points from safety and confirmation of their instant return to National Two is seemingly just around the corner.

Elsewhere in National One, Rams RFC remain eight points behind leaders Richmond after a hard-fought 35-31 triumph over Bishop’s Stortford whilst there was also an excellent 33-3 victory for an in-form Chinnor against Old Elthamiams. Meanwhile, Blackheath and Cambridge secured home wins over Plymouth Albion (29-19) and Sale FC (37-31), respectively.

Caldy have moved onto 100 points in National Two North after they secured their 21st successive victory of the campaign by beating Sedgley Park 32-11. Gareth Davies and Matt Cairns’ side reached their century at Paton Field and the Wirral outfit remain 17 points clear at the summit following their latest triumph.

Ben Jones, Harrison Crowe, JJ Dickinson and Michael Cartmill all went over for Caldy, but the runaway leaders were 11-8 behind on 44 minutes after Jamie Harrison had crossed in between two Steve Collins penalties.

However, the home side pulled clear to wrap yet another victory in their quest for automatic promotion.

With third-placed Sedge suffering a setback, Fylde (2nd) are now nine points clear of their rivals in the race for a top two spot following a 51-15 victory away at Chester. Warren Spragg’s rampant side ran in eight tries at Hare Lane so the Lancashire club will be able to take some confidence into Round 23’s clash with Caldy as they look to end the table toppers’ unbeaten record.

Down at the bottom, there were vital away victories for Wharfedale, Hull and Huddersfield as they all distanced themselves from the relegation places.

Dale defeated Tynedale 34-26, with winger Oli Cicognini grabbing a brace for the Greens, whilst Hull beat rivals Luctonians 17-10 at Mortimer Park. Mike Adlard’s second half score proved to be the difference for the Yorkshire club, who are now nine points clear of the drop zone.

Three tries in a 14-minute period was decisive for Huddersfield as they secured an excellent win against Sheffield Tigers. A double for Josh Crickmay and a second-half score from Richard Piper put Field in a commanding position at Dore Moor before Jack Maplesden’s late effort sealed maximum points for Gareth Lewis’ side.

With those results in mind, Otley’s 47-33 loss to Loughborough Students means Charlie Maunder’s side are now five points from safety as the men from Cross Green failed to halt their slide in Round 22.

Elsewhere across the division, Scunthorpe could be relegated this coming Saturday after suffering their 21st defeat of the campaign against an impressive Hinckley outfit (47-5) whilst Preston Grasshoppers fell further into the mire following a 52-12 loss away at Stourbridge.

Redruth arguably produced the result of the weekend in the National Leagues as their 14-3 win against Tonbridge Juddians has blown the National Two South promotion race wide open.

Connor Glibert’s converted score after 12 minutes and a second-half penalty try was enough for Nigel Hambly’s side to continue their blistering run of form and dent Tonbridge Juddians’ title hopes.

Before the beginning of Saturday’s action, TJs had already been knocked off top spot by Taunton Titans after Tony Yapp’s side beat Clifton 36-10 on Friday night.

Ratu Vakalutukali put Taunton ahead early on in Bristol before both sides swapped penalties. The visitors then grabbed the game by the scruff of the neck as Julian Salvi (2) and Dan Lee both scored to make it 29-3.

On the hour, Clifton did hit back through Dan Broady but the Titans wrapped up an excellent win when Sonny Haines dotted down.

Taunton now sit one point clear of Tonbridge Juddians and third-placed Henley Hawks – who beat Old Albanian 20-16 thanks to scores from Tom Emery, Jack Robinson and Scott White – whilst Redruth (4th) are only four points off the top with eight games remaining.

At the wrong end of the division, Westcliff saw a 12-point lead disappear in the final 10 minutes against Worthing Raiders as the Sussex side came away from The Gables with a remarkable 34-29 victory.

Peter Mahony and Jacob Ford’s side had led 29-17 following scores from Charlie Reed, Myles Bean (2) and Sam Reynolds but a potentially vital victory in their bid to avoid relegation dissolved in front of their eyes.

Jack Forrest and Curtis Barnes both crossed for the Raiders whilst Matt McLean landed a late penalty to seal a tremendous fightback for Worthing.

The silver lining for Westcliff is they were the only side in and around the drop zone to pick up points in Round 22 as rivals Bournemouth, Sutton & Epsom and Old Redcliffians all suffered defeats against Esher, Dings Crusaders and Barnes, respectively. Elsewhere, Bury St Edmunds edged a 29-28 thriller against Leicester Lions in Suffolk.