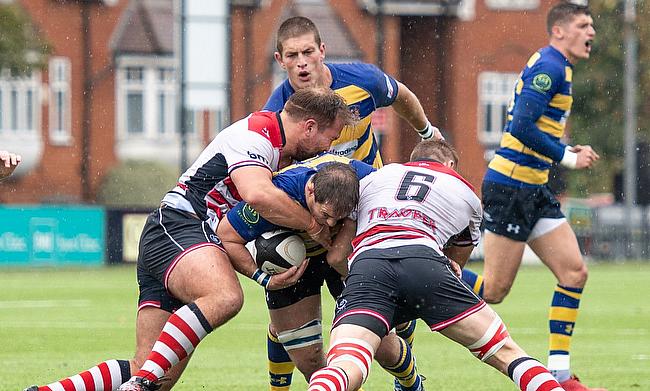 Old Elthamians have an opportunity to make the next statement in this thrilling National One title race when they take on Rosslyn Park on Saturday.

Recent defeats against Blackheath and Darlington Mowden Park has seen OEs drop to third in the table, but they are only three points behind the league leaders.

And currently on top of the pile are Rosslyn Park. Kieran Power’s side have won their last six matches and they can increase their promotion hopes with another victory in Round 18.

Rivals Blackheath and Ampthill & District will be interested in the outcome at College Meadow, but both sides will be focused on their own jobs as they face tough fixtures against Darlington Mowden Park and Plymouth Albion, respectively.

Down at the bottom, it is equally as intriguing. Just six points separate eighth place Mowden Park and the relegation spots so this weekend could be key with the likes of Cambridge hosting Esher, Cinderford entertaining Loughborough Students and Sale FC travelling to Bishop’s Stortford.

Birmingham Moseley, a side currently in the drop zone, visit Rotherham Titans while elsewhere, a strong Chinnor outfit come up against Caldy.

Six wins in a row and Rosslyn Park now sit at the top of National One. Their cutting edge was on show in Round 17 as they defeated Rotherham Titans to move to the summit of the division. Kieran Power’s side couldn’t have wished for a better start to a tricky looking January and with Darlington Mowden Park and Blackheath to come, next on the agenda is a huge clash against a title rival.

It’s a big one this weekend…@ElthamiansRFC v Rosslyn Park

Let’s get down there and support our boys!

Park are three points clear of the chasing pack and Old Elthamians are very much part of the cluster of teams in the conversation for top spot. OEs were in pole position heading into the final game before Christmas, but back to back defeats against Blackheath and Darlington Mowden Park now leaves them in third place. Those aforementioned losses would be forgotten about if OEs were to beat Rosslyn Park this weekend and a win for the hosts would also add another twist to this fascinating promotion fight.

Blackheath will have one eye on the clash between Old Elthamians and Rosslyn Park this weekend, but their main focus will be on bouncing back from last week’s defeat. James Shanahan’s men were beaten by a resurgent Plymouth Albion outfit at Brickfields, but despite that loss, Blackheath sit second in the table and they are three points off top spot.

However, they will arrive in the North-East fully aware of what Darlington Mowden Park are capable of. Danny Brown’s side produced a superb performance in Round 17 as they completely outclassed title chasing Old Elthamians to begin 2019 in style. DMP have won successive matches on home soil and with confidence high following last week’s win, they will be keen to continue the positive vibe surrounding the Northern Echo Arena by beating another promotion candidate on Saturday.

Ampthill and District completed the trio of title chasing sides who suffered a defeat on the opening weekend in January. The A’s narrowly lost to Esher in a dramatic encounter at Molesey Road and the Bedfordshire outfit would have been frustrated that they weren’t able to capitalise on the misfortune of their promotion rivals.

The men from Dillingham Park remain in fourth spot and they are now four points behind leaders Rosslyn Park as they prepare to host Plymouth Albion in Round 18. A few weeks ago, you may have said Ampthill would be clear favourites for this match, but Albion’s recent upturn in form means we should be in for a cracker this weekend. Kieran Hallett’s side were languishing in the bottom three at once stage, but four straight wins has ignited their campaign. Plymouth are now seventh in the table and they will provide a very tough test for Ampthill.

Rotherham Titans’ five game winning streak was halted in Round 17 as rivals Rosslyn Park produced a clinical display to see off Joe Barker’s side. The defeat for the Titans put a slight dent in their promotion hopes as the Yorkshire outfit now sit eight points behind top spot heading into this weekend. Something which Rotherham have been good at this term is bouncing back after a negative result and they will be hoping that continues when they welcome Birmingham Moseley to Clifton Lane.

Both of these sides were competing in the Championship not so long ago, but this season, they are fighting for very different goals. Moseley currently find themselves in the bottom three, but the Midlands club began 2019 with a crucial win over Bishop’s Stortford. Richard Protherough’s men have now picked up three victories from their last five games, but it is their away form which they must improve upon. Moseley have won on just one occasion on their travels this term, but if they were to double that tally this weekend, they could move out of the drop zone.

Just two wins from their last 10 games has begun to take the shine off what was a very solid start to the season for Caldy. The Wirral outfit were certainly the surprise package in the opening weeks of the campaign, but over the last couple of months, they have seen a dramatic dip in results.

Last Saturday’s humbling loss away at Loughborough Students may have stung the most for the ninth-placed side and with just five points separating them and the bottom three, they will be itching for a positive performance and outcome when they host Chinnor this weekend. The visitors to Paton Field come into this clash after narrowly beating Cambridge to kick-off 2019 and Matt Williams’ side currently sit sixth in the table. The last time these two sides met, Caldy edged the contest 27-24 at Kingsey Road so Chinnor will be looking for some vengeance in Round 18.

After a run of four straight defeats, Sale FC have kick-started their National One campaign either side of Christmas. An excellent away win over Caldy just before the break was backed up last weekend as Jonathan Keep’s side defeated Cinderford at the CorpAcq Stadium. Those two victories have been crucial for Sale as the teams around them have also started to pick up their form and the Manchester-based club head into this weekend 10th in the table.

However, Sale are only three points clear off the relegation places and a side currently in the dropm zone are Bishop’s Stortford. Andy Long’s side suffered a blow to their survival chances in Round 17 as they lost to rivals Birmingham Moseley and the men from Silver Leys are now bottom of the division and 10 points from safety. Stortford have won just one of their last 11 games so they will be eager to turn their fortunes around otherwise alarm bells may start to ring for the Hertfordshire club.

Cinderford ended 2018 with a brilliant victory against Birmingham Moseley to halt a run of five games without a win, but Paul Morris’ men were unable to build upon that result last week. The Foresters were on the wrong end of an inspired performance from Kieran Wilkinson as the Sale FC man guided his side to a victory in the North-West.

Cinderford’s dip in form means they are only two points above the drop zone, but they have a chance to move away from trouble when they take on Loughborough Students, who occupy a place in the bottom three as things stand. While Cinderford are trying to find some positivity, the Students are going through a mini purple patch. Alan Buzza’s side are continuing to pick up points despite their league position and a thumping win over Caldy in Round 17 lifted them off the foot of the table. Loughborough are now seven points from safety and another victory would significantly enhance their survival bid.

Two clubs floating just above the trapdoor meet at Volac Park this weekend as Cambridge host Esher. The home side were on the wrong end of tight affair against Chinnor last weekend and the defeat for Richie Williams’ men leaves them just a single point clear of the relegation zone. The Blood and Sand have actually won four of their last eight games, but because the teams below them have picked up their form, Cambridge have been dragged into a fight towards the wrong end of the table.

One of those clubs which has improved their form is Esher. The Surrey-based side secured a brilliant victory over promotion chasing Ampthill and District in Round 17 and their win at Molesey Road kept them outside the bottom three on ‘Games Won’. Ricky Nebbett’s side have picked up three wins since the start of December and if they could add to that total on Saturday, it could turn be one of their most noteworthy triumphs of the season thus far.