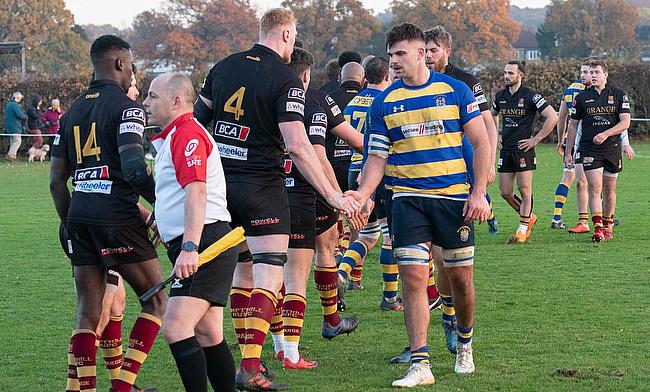 Blackheath and Old Elthamians remain level on points at the summit of National One as the leading pair both drew their matches in Round 11.

In their clash with Cinderford, table toppers ‘Club’ did hold a 15 point lead, but they were pegged back in the second-half while OEs shared the spoils with fellow promotion candidates Ampthill and District at College Meadow.

Chinnor and Caldy have moved up the division following victories over Birmingham Moseley and Bishop’s Stortford while Rosslyn Park and Rotherham Titans have lost some ground in this remarkable title race after falling to defeats against Esher and Cambridge, respectively.

Elsewhere in National One, Darlington Mowden Park are moving into the promotion picture after a late victory over Plymouth Albion and Sale FC edged past Loughborough Students at Heywood Road.

Blackheath remain on top of the National One table, but ‘Club’ had to settle for a draw with Cinderford after letting a 22-7 lead slip away from them.

The visitors held a 15-point advantage at the break as Tom Williams, Neale Patrick and Craig Dowsett crossed, with Sam Smith responding for Cinderford.

But Blackheath were unable to increase their tally in the second period as the hosts battled their way to a share of the spoils.

Nathan Taylor and Ewan Fenley both dotted down and a penalty from Liam Hemming six minutes from time rescued a draw for Cinderford.

The result leaves the visitors three points off the top while OEs remain in second, level on points with leaders Blackheath.

Pritchard and OEs fly-half Tom White exchanged penalties before both sides scored tries to make the game 10-10 at the break.

Billy Johnson dotted down for the A’s, but his effort was cancelled out just before half-time by Charles Dockery.

White nudged the hosts in front shortly after the interval and despite both sides having large spells of possession, Pritchard kicked the final points of the afternoon to seal a draw at College Meadow.

Craig Holland scored a late try as Chinnor overcame Birmingham Moseley to move up to third place in National One.

Danny Barnes grabbed the first points of the afternoon for Chinnor, before Reon Joseph scooted over just before half-time.

Tries by Jack Ramshaw, Dan George and Joseph saw Chinnor completely turn the game on its head after the break, but Moseley thought they had done enough to earn a draw when Caves rumbled over.

However, there was to be one final twist in this thriller as Holland sniped his way through the Moseley defence to touch down and secure a hard-fought away win for Chinnor.

Caldy claimed a victory to lift themselves up to fourth in the division as they beat Bishop’s Stortford at Silver Leys.

Two penalties from the boot of Ben Jones as well as Luke Hibberd’s try saw Caldy carry a 13-0 lead into the break.

Immediately after the restart, Manu Vunipola struck the first points of the afternoon for the hosts, but Andy Long’s men failed to significantly trouble their opponents for the remainder of the half as Caldy returned to winning ways.

Esher are out of the relegation places in National One after a fine win over promotion candidates Rosslyn Park.

Joe Beckett put Esher ahead at the Rock before two penalties from Paul Roberts extended the visitors’ lead to 11-0 at the break.

Greg Lound slotted three points to get Park up and running, but Charlie Gossington’s score kept the away side in control after the interval.

The hosts gave themselves a glimmer of hope in the final 10 minutes as Adam Frampton crossed to cut the deficit to eight points, but Kariym Irving’s score settled the matter for Esher, despite Frampton grabbing a second try late on.

Cambridge fought back in the second half to secure an excellent win over Rotherham Titans at Clifton Lane.

After trailing 11-0 at the break, Mike Ayrton along with Sam Yawayawa and Nana Asiedu all touched down to help the Blood and Sand claim their third victory of the season on the road.

Three penalties from the boot of Alex Dolly and a try from Seb Nagle-Taylor looked to have put Rotherham in control, but instead, they fell to their second defeat on the bounce.

A late penalty from Warren Seals saw Darlington Mowden Park beat Plymouth Albion to move to within six points of leaders Blackheath as they delivered back to back victories for the first time since September.

DMP trailed early on as Jamie Salter barged his way over for Plymouth, but the hosts found themselves 19-12 up during the second period following tries from Jamie Blamire, Callum Mackenzie and Chris Georgiou.

However, Matt Shepherd was able to level up the scores from the tee to add to Jack Arnott’s first half try for Albion.

But there was to be late drama at the Northern Echo Arena as DMP were awarded a penalty and Seals kept his cool to the clinch the win for Danny Brown’s side.

Sale FC returned to winning ways in National One as they fought back to beat Loughborough Students at Heywood Road.

But after scores from Adam Aigbokhae and Jack Moorhouse, Ryan Parkinson’s try sparked a comeback as Sale trailed 24-19 at half-time.

Tom Ailes, Matthew Bradley and Moorhouse put the hosts in the driving seat during the second period, but Loughborough did manage to claim two potentially vital bonus-points from their trip to Manchester as Priestner touched down late on for the division’s bottom club.