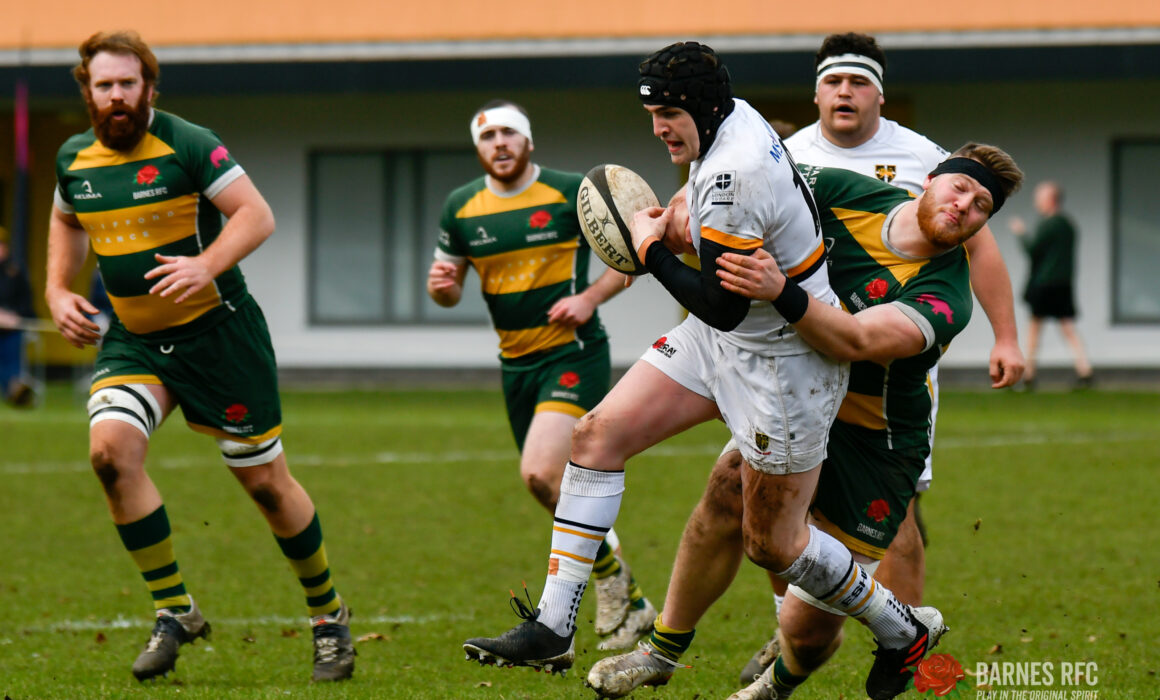 With just two months left in the season, the promotion races in all three divisions and the relegation scrap in National One are owning the narratives and the outcomes from Round 22 will undoubtedly change the picture across the board. (Photo Credit: Jonathan Knight)

League leaders Rosslyn Park are on a bye-week in Round 22 which presents the chance for Caldy to enter March at the summit of National One. Gareth Davies’ machine are searching for a 10th straight victory which would take them top and they travel to bottom of the table Tonbridge Juddians odds on to move into pole position.

The Wirral outfit have lost just one of their last 18 matches and given they won promotion back into this division in 2019/20, no one would have predicated Caldy to be challenging for the title with the final third of the season now upon us. Whilst there is a whopping 50 points between the visitors and TJs, the home side come into this in high spirits after an excellent 16-12 win against Blackheath last time out. A shock result may look unlikely on paper, but Peter Dankert’s side are continuing to fight for their National One status.

Tonbridge Juddians are currently 15 points from safety, but this is a key weekend for the teams around them in the standings. Leeds Tykes (14th) v Birmingham Moseley (10th) is one of the standout fixtures and Adam Balding’s men are four points clear of the bottom three, but the Midlands club have won all three of their away games since the turn of the year.

As for the Yorkshire outfit, they haven’t been in action since February 5th due to their bye-week which was followed by last Saturday’s postponement against Cinderford. In the reverse fixture back in October, Jon Callard’s side saw a victory snatched from their grasp as Aquile Smith’s late try clinched a win for Moseley. Given where both teams currently find themselves, expect another close encounter at The Sycamores.

Two sides in-between Moseley and Leeds Tykes are Blackheath and Plymouth Albion who meet in Devon in Round 22. ‘Club’ come into this clash after a defeat against Tonbridge Juddians and the setback means James Shanahan’s side are now only four points ahead of the drop zone.

The men from Well Hall kick off March by taking on Leeds Tykes so back-to-back wins over the course of the next two weekends could transform their campaign. In terms of Albion, they conclude the month with a third home game on the spin after their clash with Birmingham Moseley was called off last Saturday. Damian Welch’s charges have won one and lost one at Brickfields in February and if they were to add another ‘W’ to the victory column against Blackheath, then Plymouth would move out of the bottom three.

Elsewhere across Round 22, Sale FC (3rd) – fresh from their thrilling finale against Rosslyn Park -will aim to make it six wins in a row when they visit Bishop’s Stortford whilst Rams (4th) host Darlington Mowden Park with both sides looking to build on recent momentum.

The prospect of the National Two North title race being decided over the next three weeks is unlikely, but in that period, there are some intriguing sub-plots which have to be focused on. Following this weekend, the current top two –  Hull (1st) and Rotherham Titans – clash at Chanterlands Avenue before promotion candidates Sedgley Park and Stourbridge (4th) face off on March 12th but ahead of all of that, two of the aforementioned teams collide in Round 22.

After playing out an engrossing 48-33 clash in the Midlands at the start of February, Rotherham and Stourbridge meet again at Clifton Lane. The Titans were triumphant at the beginning of the month and have remained unbeaten since then whilst Stour have only had one fixture between these two matches which was a thumping 12-try win over Harrogate last time out.

As it stands, Rotherham are eight points behind Hull with a game in hand whilst Neil Mitchell’s side are a further four points back. With both clubs entering a season-defining section of the campaign, much is at stake in Yorkshire.

Hull‘s Round 21 fixture with Huddersfield was postponed last week and the league leaders return to action against Harrogate on Saturday, whilst Sedgley Park (3rd) host Hull Ionians.

Last weekend, Fylde’s promotion hopes were dashed by Sedge as they were beaten 38-0 at Woodlands, but the Lancashire club will want to produce a reaction when they visit Bournville. Elsewhere, Luctonians travel to Wharfedale and Loughborough Students take on Tynedale whilst Sheffield Tigers go to Blaydon and Chester visit Huddersfield.

Redruth may well be on a six-match unbeaten run, but if they were able to extend that sequence this weekend, it could prove to be their most significant result of the campaign. The Reds currently lead the way at the top of National Two South by four points and after seeing off title rivals Clifton two weeks ago, the next hurdle for Nigel Hambly’s side is a trip to third-placed Esher.

A few weeks ago, I said the ball was in the Eees’ court when discussing the promotion race. With games in hand and with confidence flowing, Peter Winterbottom’s side were in control of their own destiny, however successive defeats to Henley Hawks and Hinckley mean Esher are now seven points behind Redruth with a game in hand. If the Surrey outfit were to lose on Saturday, that could be curtains for their hopes of returning to National One but Esher can take confidence from the fact they beat Redruth 34-26 back in October.

Sandwiched in second place are Clifton who recovered from their loss against Redruth by hammering Old Albanian in Round 21. Matt Salter’s men visit bottom of the table Westcliff this weekend with one eye on events at Molesey Road.

🔴 @RedruthRugby have a four point lead at the top of #Nat2s

This week's Key Game on The National League Rugby Review Show is a crucial fixture!

Worthing Raiders (4th) have pulled themselves right back into the promotion picture with a run of seven straight victories. The Sussex side, who are level on points with Esher, face Leicester Lions on Saturday and like Clifton, they will also be monitoring the outcome between two of their fellow title contenders.