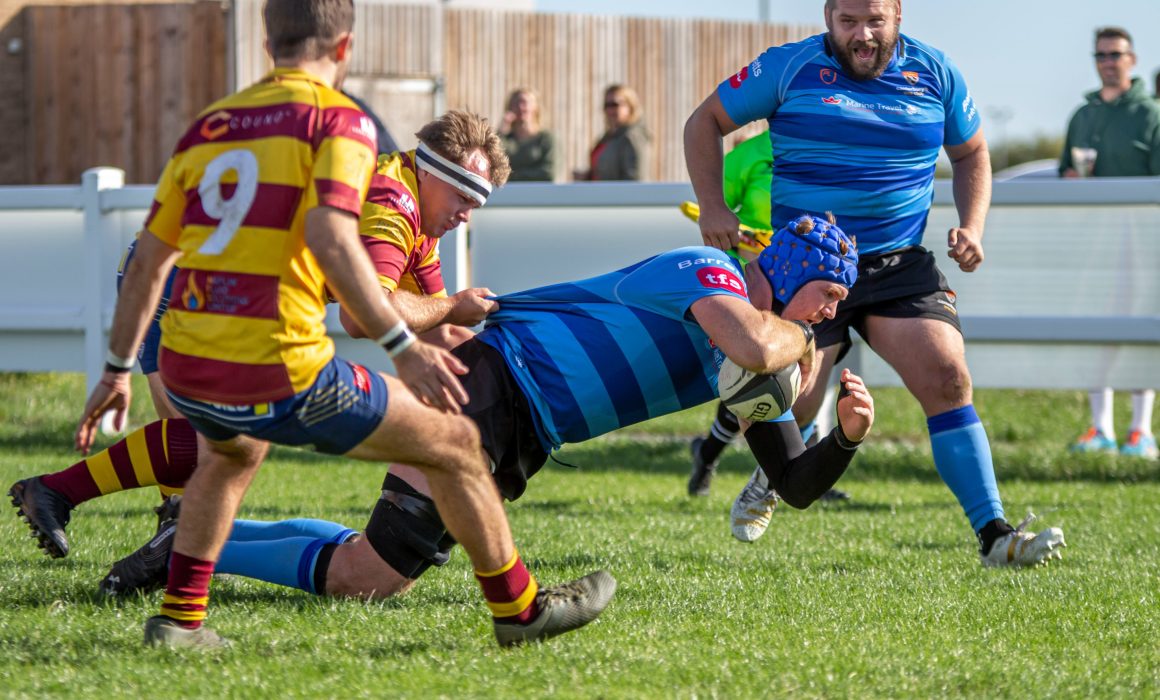 The opening month of the season has flown by so as September draws to a close, who can continue to scale the heights and which clubs can finally open their account for 2022-23? Photo Credit: (Phillipa Hilton)

Last season, Sale FC concluded September with three wins from their first four games. A surprise defeat at Tonbridge Juddians was the only blot on their copybook, but Jonathan Keep’s men will be confident of completing a full house this time around as they settle into another title charge. They had to work hard to get past a stubborn Plymouth Albion in Round Three but two battling away victories, and the thrashing of Leeds Tykes, leaves “The Dogs” in a strong position to enter October on top of the pile.

However, Taunton Titans will be determined to make life difficult for the current league leaders. Tony Yapp’s charges will want to end this month with a victory as they head to the North West off the back of successive defeats against Plymouth Albion and Cambridge.

Both Esher and Leeds Tykes are longing for their first success of the campaign so when the two clubs collide at Molesey Road in Round Four, something has got to give. The home side haven’t lacked for effort in their quest to get off the mark, especially over the course of their last two games against Rosslyn Park and Birmingham Moseley, but ultimately they have been on the wrong end of tight encounters thus far.

As for Leeds Tykes, they have scored the fewest points in the league to date and will be desperate to recapture the resurgence which saw them avoid relegation towards the end of last season. When the teams walk out in Surrey on Saturday afternoon, it will be the first meeting between the clubs on Esher’s patch for nearly 11 years. Back then, both were in the Championship and the spoils that day went to the Tykes (formerly Yorkshire Carnegie). How Jon Callard and his troops would love history to repeat itself this weekend…

Returning to the summit of National One, Rams, Rosslyn Park and Cambridge will want to maintain their unblemished records when the trio take on Bishop’s Stortford, Hull and Darlington Mowden Park all away from home, while a Cinderford side with back-to-back wins under their belt host Plymouth Albion and Birmingham Moseley visit Chinnor.

To be blunt, there isn’t really anything extraordinary about how the top of National Two North is shaping up as the first month of the season draws to a close. Four of last year’s top six find themselves towards pole position again, and it is Fylde who are out in front as things stand. The Lancashire club are the only team in the division to collect maximum points from their first three outings and they have also scored an average of 43 points along the way.

However, for all of their recent triumphs, an away clash against Hull Ionians will be a major test to see if Chris Briers and Alex Loney’s men can sustain a title bid this term. Recent wins over Rotherham Titans and Wharfedale highlight the strong start that the I’s have made. They currently sit fourth in the standings with three victories to their name so if the Yorkshire outfit were to add to that list at Brantingham Park, it would further emphasise their possible ambitions for this season.

To contradict myself slightly, you could argue that the ‘surprise package’ milling around the summit of the division is actually Tynedale (3rd). Ben Woods’ side did finish in the top half last time out, but the North East club have begun 2022-23 firmly on the front foot. Their encouraging performances have garnered three straight wins but a tough assignment awaits in the form of Rotherham Titans in Round Four.

The men from Clifton Lane responded emphatically to their defeat against Hull Ionians by smashing their way past Blaydon last weekend, Lloyd Hayes the star of the show once again. Rotherham are only four points behind early leaders Fylde so a win to conclude September would be ideal with just one more round to play until the first ‘Rest Week’ of the season.

Elsewhere, Sedgley Park – fresh from one of their tries against Preston Grasshoppers going viral – visit Harrogate aiming to continue their winning start, while fifth-placed Wharfedale go to Blaydon and a Sheffield squad currently playing with confidence take on Chester.

Also in Round Four, Sheffield Tigers head north to face Otley and both Preston Grasshoppers and Huddersfield will be hoping to earn their first win of the season when they meet at Lightfoot Green.

The newly formed National Two East was always going to be unpredictable, but to have first place down to 10th separated by just three points is still quite remarkable. After a tough one to take last week against Dorking, current table-toppers Barnes will have to dust themselves down quickly as they head out of London to take on Henley Hawks. Their late defeat in Round Three would have wounded Jack Heald’s charges, but they have an opportunity to immediately respond and end September on a high.

Dry Leas will hold fond memories for Barnes as back in April, they recorded an excellent 34-19 victory but the Hawks won’t want anything similar to scupper their upward trajectory. Following an opening day defeat on their home turf, Henley have hit back with wins over Old Albanian and Guernsey Raiders which leaves them right in the middle of this melee at the top. Whatever the outcome in Oxfordshire, the shape of National Two East will have changed come Saturday evening.

Both Canterbury and Blackheath will also play a part in the swapping of positions this weekend. The two clubs clash in Kent in Round Four in what will be their first meeting in just under three years. Last time out, The City Men returned to the winners’ enclosure thanks to a victory over Westcliff and it provided the perfect tonic for Matt Corker’s side following their derby day loss to Tonbridge Juddians.

However, Canterbury will have to be on the money again as Blackheath arrive at The Marine Travel Ground with maximum points to their name. Last week, ‘Club’ returned to action with a bang as they thumped Rochford Hundred and they can end September by going three from three if they can defeat one of their early rivals towards the top of this congested table.

Also getting their elbows out are the aforementioned Tonbridge Juddians (3rd) who take on Old Albanian this weekend while a bullish Dorking outfit go to fellow promoted side Sevenoaks.

Elsewhere, Rochford Hundred entertain Worthing Raiders, Bury St Edmunds host Westcliff and Guernsey Raiders and North Walsham will be eager to get off the mark when they come up against one another at Footes Lane.

The Leicester Lions juggernaut has refuelled and set off at a scorching pace in National Two West. After surging to fifth place last term, Gareth Collins’ side have taken things up a notch and a trio of bonus-point triumphs means they head into the final weekend of September targeting a 12th successive league win.

The spotlight on the Midlands club will be greater in Round Four as The National League Rugby Review Show cameras will be at Mortimer Park to see if the Lions can continue to roar against Luctonians. The home side have responded well to their opening day loss to Dings Crusaders by defeating Old Redcliffians and Bournville but this will be a different kettle of fish for the Herefordshire outfit.

This Saturday’s match also marks Lucs’ ‘huge charity’ game of the season. The hosts will wear purple with the aim of raising funds for two local charities – Be More Frank and The Little Princess Trust. Last term, the club raised over £14,000 for Prostate Cancer UK so if you’re attending the game, please show your support if you can.

Back to the action and nestled cosily behind Leicester Lions in the table are Exeter University. They have started their journey at level four with three straight wins and could finish the month on top of the pile providing Leicester Lions stumble against Luctonians. Keith Fleming’s side have seen off Barnstaple, Redruth and Loughborough Students so far and are, on paper, favourites to make it a quartet of victories on Saturday.

The Green and Whites welcome bottom of the table Stourbridge to Topsham and Neil Mitchell’s men might be pleased to see the back of a difficult September. Stour have shipped 156 points in their first three outings and life in a new division hasn’t begun well for one of National League Rugby’s mainstays. Can they find some inspiration and spark an uplift in Devon?

Dings Crusaders are the only other side in National Two West to have picked up all of the points on offer thus far and they host Bournville in Round Four while Redruth (4th) visit Hinckley, Clifton take on fellow Bristolians Old Redcliffians and Loughborough Students go to Hornets.

Elsewhere, Newport (Salop) will be hoping for consecutive home wins when they face Barnstaple.