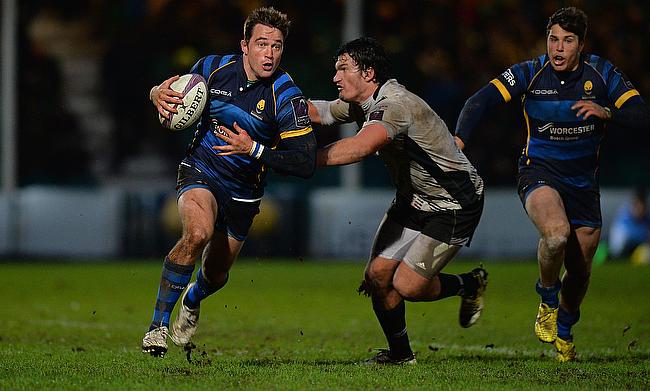 The former Worcester Warriors centre talked through his recent swim from Dover to France as well as his steps into coaching with National Two side Bournville. Photo Credit: (JMP)

This year has thrown up many obstacles.

The challenges which we have all faced throughout the coronavirus pandemic have, of course, mattered greatly, but for both Alex Grove and Bournville Rugby Club, they can afford to smile when reflecting on this period having achieved some personal successes.

For the latter, they were romping towards the Midlands Premier title before the Covid-19 crisis struck, leaving questions marks around whether Mitch McGahan’s side would secure an historic promotion to the National Leagues. In terms of Grove, who was the defence coach at Bournville last season, preparations for his charity swim across the English Channel were also thrusted under a cloud of uncertainty.

However since then, it has been good news for Bournville and Grove as the club’s inevitable league title was confirmed whilst the former Worcester Warriors player was also able to complete his 21-mile swim from Dover to France at the beginning of August.

“It has been an interesting few months and I would say the swim is the hardest thing I have done!” Grove told ncarugby.com. “Of course, it is tough physically, but certainly psychologically, it is a massive mental challenge. It wasn’t guaranteed that I would even do it because of all the variables, but it was a relief to get to the other side!”

Grove crossed the channel in a highly impressive time of 13 hours and 57 minutes and his decision to undertake this challenge came after he pressed the pause button on his rugby career in 2018.

Listening to the former Premiership centre dissect the different aspects of his swim, it was clear to see why Grove decided to take on the channel: “I was after a challenge away from rugby to replace the buzz of a Saturday afternoon and to give my training a purpose. I have always been into training. I am not really the type who goes to the gym for the sake of looking good on the summer holidays. I’ve always like training for something.

“Without the channel swim for the last two years, I wouldn’t have had that purpose. That said, I have got no plans to do something else just yet!”

Over the course of our conversation, Grove’s achievement becomes more inspiring. Battling the hefty waves after beginning the swim in the early hours, sharing the waters with tanker ships and getting acquainted with jellyfish, and possibly seals, were all elements the 32-year-old had to overcome.

“I knew the jellyfish would be a massive factor of the swim. The down side to the seas warming up is that you do get more jellyfish. You can avoid most of them, but I didn’t avoid all of them!

“I also think I hit a seal at one point! I certainly whacked something pretty hard. My brother [Oli] said he saw three seals! I am lucky I didn’t see it underneath me because I think I would have felt a bit funny about that!”

Grove will be the first to admit the occasional jellyfish sting is nothing compared to the core reason behind why he took on the challenge.

Worcester Warriors’ main charity is the Acorns Children’s Hospice, which also has centres in Birmingham and Walsall, and following his decade-long affiliation with the Sixways club, Grove cares deeply about the charity which provide specialist palliative care for life-limited and life-threatened children as well as support for their families.

When Grove decided to do the swim on behalf of Acorns, he initially set a target of £15,000 but he has gone on to raise more than double that total, with the current amount standing at over £31,500.

“I still live in Worcester and the charity is still on the doorstep,” added Grove. “Having learnt more about Acorns over the last 12 months, the cost it takes to run these places is phenomenal. This is just one tiny jigsaw piece in the whole puzzle and of course it makes a difference, but in the bigger picture, they need loads of people doing these sorts of things.

“I didn’t think we’d reach anywhere near that figure. Mel Hall, who I have been liaising with who is the head of fundraising at Acorns, she asked me at the start what my target was. I had no idea and decided on a figure, but to actually double it is really pleasing.

“My wife and I have got two kids and we’re lucky that they are both healthy. We could have been in the position that so many at Acorns are in so to give a little bit back felt right for us as a family.”

‘Giving back’ is something which Grove has also applied to rugby since calling time on his playing days two years ago. Still a Warriors fan, the former centre has been a co-commentator on local radio for some of Worcester’s matches, but last season, he was able to step back into the game in a coaching capacity at Bournville.

When the Midlands Premier campaign was halted back in March, the club were 22 points clear of nearest challengers Sheffield following 21 wins from their 22 matches and Bournville’s efforts were rewarded when their promotion was confirmed by the RFU based on their ‘best record playing formula.’

It means they will be competing in National Two North for the first time in the club’s history whenever the disrupted 2020/21 campaign can begin and Grove admits everyone at Bournville deserved the success of last year.

He added: “The opportunity to coach at Bournville was great. We got promoted last year and the guys trained and played really well. First and foremost, it is about enjoying it but the guys worked really hard and learnt so much. The rate of improvement from the start of the season to the end was phenomenal.

Great to catch up with and meet (via phone) @joeharvey34 @nca_rugby & chat to them about @BvilleRFC season & an insight into our history! Really looking forward to the challenge ahead of us in the National leagues (whenever we start again) https://t.co/lw9S6rPYvG

Grove may well be involved with the club again for their maiden National League campaign and he feels the values which Bournville already have in place will be massively beneficial ahead of a challenging debut term in the division.

“I think there is no intention to climb through the leagues so it is about consolidating in level four and trying to be competitive,” he said.

“I think in a strange way, the pandemic has acted as a catalyst for clubs to take stock. We have brought players in, but it is not the case of buying in all the players from the league above. It is actually quite nice to focus on what we have within and we had people turning up and putting their bodies on the line and that’s why I think we finished where we did. I think that serves as the best foundation, that boys are willing to turn up and graft.”

Grove, himself, laced up the boots on two occasions last season, but he kept his playing time to a minimum in order to look after his body ahead of his channel swim.

Whether his next challenge will involve the shores again or see him at the Avery Fields, we will have to wait and see but what is hopefully ahead for Bournville and Grove should excite both club and player/coach alike. “People have asked what is next, but there will be something because I don’t want to sit still because I will get bored too easily! Hopefully I will be involved in some capacity with Bournville too because they are a great club. I don’t know if I will actually be putting on the boots on a Saturday or staying in the dugout, but we will see!”

To still donate to Alex’s challenge, you can visit his JustGiving page HERE