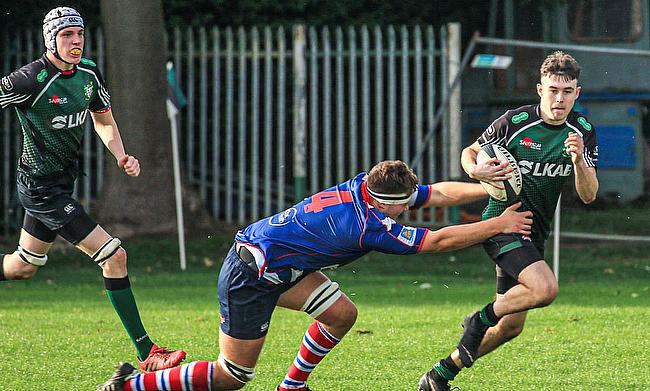 As we approach the completion of the first third of the campaign, the spotlight will be on both the top and the bottom of National Two North this weekend. Photo Credit: (John and Barbara Austin)

At the summit, league leaders Caldy enter two potentially crucial weeks beginning with this Saturday’s clash against third-placed Sedgley Park before facing Fylde (2nd) at the start of November.

In Round Eight, Fylde take on Chester as Warren Spragg’s side put their unbeaten record on the line and if results go their way, they could be top of the pile heading into their clash with Caldy next weekend.

At the wrong end of the division, there are two standout fixtures taking place on Saturday with newly-promoted Hull and Luctonians battling it out to claim a morale boosting win in Yorkshire whilst bottom of the table Scunthorpe take on Hinckley, who sit just one point clear of the drop zone as things stand.

So far this season, the top three in National Two North are yet to face one another but that is about to change over the next two weeks. First up, league leaders Caldy travel to third-placed Sedgley Park and the table toppers have not put a foot wrong this term. Gareth Davies’ side have won all seven of their matches and they currently sit one point clear at the summit heading into a potentially crucial 14 days or so for the club.

After this fixture with Sedge, Caldy take on second-placed Fylde so a win at Park Lane would be a huge statement of intent, but the hosts will have other ideas. Scott Barrow’s men are four points behind the top two as things stand and last Saturday’s dramatic fightback at Chester was a stereotypical sign of promotion hopefuls. Sedge could be top of the tree come Saturday evening if other results go their way and a home victory would further ignite an already intriguing battle at the summit.

Of course, Fylde will be concentrating on their own fixture with Chester in Round Eight but the home supporters at Woodlands will be refreshing their phones throughout the afternoon as they keep tabs on proceedings at Sedgley Park. Warren Spragg’s side have been superb thus far and they are currently unbeaten so another positive outcome on Saturday could see Fylde move to the top of the division.

However, they will not want to get ahead of themselves when Chester arrive in Lancashire. When the two sides met towards the back end of 2018/19, Fylde were very much in the hunt for a top two finish but a defeat against Jan van Deventer’s side begun an unwanted run of four straight losses which ended their promotion hopes. Chester went on to reach the National Two play-off, but this time around, they are currently 15 points off Fylde. The men from Hare Lane were stunned by Sedge last weekend as they conceded three tries in the final 10 minutes so this Saturday, they will be eager to bounce back from that defeat.

Following three defeats from four matches, Stourbridge’s positive start to the season was in danger of fading into the background but Neil Mitchell’s side sealed a comprehensive victory over Scunthorpe in Round Seven to get their campaign back on track. The Midlands club moved up fourth but find themselves 10 points off the top two so stringing together a run of victories might be necessary if they are to close the gap on the early pacesetters.

This weekend they take on Preston Grasshoppers who were second-best against Tynedale last Saturday, but their performance paled into insignificance after an injury to centre Alex Hurst. The good news is the injury to the Hoppers man isn’t as serious as first feared and a victory for Preston in Round Eight would be a positive way to end a difficult month for the Lancashire club. Paul Arnold’s side concluded September with a home win, so can they do the same on Saturday?

Wharfedale suffered a home loss to Sheffield Tigers in Round Seven, but the Greens hit back last time out to secure their first try bonus-point win of the season. Dale battled hard to secure a thrilling victory over Huddersfield and their latest triumphed moved the Yorkshire club into the top eight of the division.

To conclude October, Wharfedale welcome Tynedale to the Avenue and the visitors are having a positive season so far. Following disappointing defeats to newly-promoted Luctonians and Hull to kick-off the campaign, Tyne have lost just one of their last five matches which has really sparked their term into life. Ben Woods’ side are fifth in the table as things stand and if they were able to maintain their good run of form, it would keep the North-East club in touch with the leading pack.

After a bedding in period back in National Two North during the opening month of the season, Loughborough Students are beginning to feel at home at this level. Following relegation last term, the Students begun this campaign slowly but three straight wins in October has moved them up to sixth place in the table.

Rhys Edwards’ side have a chance to complete a perfect month when they take the trip to Otley and the hosts on Saturday will be keen for a response after a heavy loss to Caldy last time out. In truth, the opening quarter against the table toppers was a positive one for Otley, but in the end, the league leaders proved too strong for Charlie Maunder and Tom Casson’s side. The Yorkshire club are back at Cross Green where they are unbeaten this term so they will be keen to keep their 100 per cent record intact in Round Eight.

Three straight defeats could have left Sheffield Tigers feeling sorry for themselves especially after impressing in the opening two rounds of the season, but Jamie Broadley’s side picked themselves up to response in a superb manner. The Tigers have beaten Wharfedale and Luctonians over the last two weeks and the Yorkshire outfit find themselves in seventh place as they prepare to take the trip to Huddersfield on Saturday.

[mpu-1] For Field, it was a double blow last weekend. A 40-30 loss at home to Wharfedale also saw them eliminated from the Yorkshire Cup, but the bigger picture for Gareth Lewis’ side will be focusing on their league form as they look to spark their season into life. Just two wins from their first seven matches represents a frustrating two months for Field but they can now enter November with a platform to build upon if they can get the better of Sheffield Tigers this weekend.

Hinckley’s frustrating National Two North campaign continued last Saturday. Their performance against Sedgley Park in Round Six highlighted what the Hornets can produce, but their strong finish to that fixture didn’t filter into their clash with Fylde last weekend. The Midlands club were outclassed and now Hinckley find themselves just one point clear of the relegation zone as October draws to a close.

However, Scott Hamilton’s side will feel like a trip to Scunthorpe might provide the perfect opportunity to kick-start their season with the hosts currently sitting at the foot of the division. Will Robinson’s men are still waiting to clinch their first win of the campaign and heavy defeats against Tynedale and Stourbridge means the Lincolnshire side may be low on confidence heading into Round Eight. However, a victory at Heslam Park this weekend would provide a much-needed shot in the arm for Scunthorpe as they aim to get off the mark.

Two of the newly-promoted clubs meet in Round Eight and the stereotypes amongst us may have predicted both teams to be in the bottom three as we head into November. However, at the start of the campaign, Hull were out to buck that trend as an unbeaten run of three matches saw them begin their return to National Two North in fine fettle.

But since their fast start, Gary Pearce’s side have slipped to four consecutive defeats and they are now one point from safety. Luctonians also kicked off the season on a high note with an excellent win over Tynedale, but that is as good as it has been for Ryan Watkins’ men. Six straight losses has seen them tumble down to 15th place so a win for either side would certainly boost morale and it could also lift someone out of the drop zone.