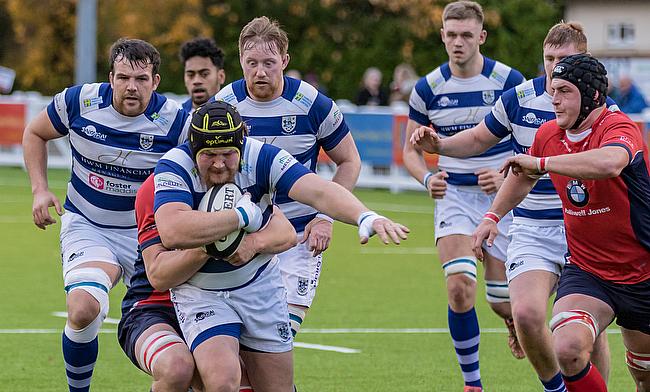 We are now a third of the way into the National Two North season and this weekend marks the beginning of the winter fixtures.

With just six games between now and the Christmas break, teams will be looking at this period in the season to try and enter the New Year on a high, especially if you’re a club at the wrong end of the table.

This Saturday does provide those sides with a chance to really ignite their campaigns with six of the bottom seven all in action against one another.

Peterborough Lions, who are currently propping up the division, travel to 11th placed Preston Grasshoppers while Macclesfield host Tynedale and Leicester Lions entertain Sheffield Tigers in the Midlands.

Fellow relegation rivals South Leicester may well be aiming to take advantage of the fixtures at the bottom when they go to eighth placed Fylde in Round 11.

At the summit, Hull Ionians will be keen to continue their winning run away at Sedgley Park, while elsewhere, second placed Chester take on Wharfedale, Hinckley go to Otley and Huddersfield face Stourbridge.

With six games to go until Christmas, Hull Ionians find themselves in an excellent position. After suffering relegation from National One, the I’s have not dwelled on their disappointment as they currently find themselves four points clear at the submit after 10 games played.

The Yorkshire outfit have also won their last six matches, but that excellent run will be tested this Saturday when they travel to fellow promotion contenders Sedgley Park. Sedge come into this clash at Park Lane desperate to recapture some consistency. Just two wins from their last five games has hampered their challenge for a top two spot and Matt Bebbington’s men are now eight points off second placed Chester. However, Sedge have won all four of their home matches this term and did beat Hull Ionians 38-5 the last time the teams met in January 2015 so could there be a repeat of that result on Saturday?

While the rest of the teams across the National Leagues had a weekend off last Saturday, Chester were in action in their rearranged fixture with Tynedale. Jan Van Deventer’s side had the opportunity to move into the top two with a victory at Hare Lane and the Cheshire outfit delivered. A 33-22 win means Chester are now two points clear of third placed Hinckley and they have also won four of their last five matches ahead of this clash with Wharfedale.

“Nobody’s talking about league titles or looking too far ahead just yet.” @RUFCChester coach Jan Van Deventer is refusing to get carried away with his side’s fine form. https://t.co/73rv5yvb2h

However, Dale are in good form as well. Rob Baldwin’s side travel to the north-west having also picked up four wins from their last five games and the Yorkshire outfit now sit sixth in the table due to their excellent form. The Greens are certainly enjoying this campaign and a victory over Chester would just continue the feel-good factor around the Avenue, but Chester have won their last 13 matches at Hare Lane so it won’t be an easy task for Dale this weekend.

Hinckley would have been hoping for a favour from Tynedale last weekend, however, the north-east side couldn’t offer a helping hand. Chester’s win over Tyne saw Hinckley fall out of the promotion places, but they will be keen to exert some pressure on the aforementioned Chester when they take the trip to Otley in Round 11.

George Chuter’s side are just two points behind Chester so they will be hoping to pick up their first win on the road since September this weekend. However, Otley have all the capabilities to inflict a third straight away defeat on Hinckley as the Yorkshire side come into this encounter having won their last three fixtures. Before Round 10, the men from Cross Green hadn’t won three in a row since November 2016 and if the seventh-place side can make it four on the bounce, it would be their best run of victories for just under three years in National Two North.

This week, Huddersfield have brought back a familiar face. Fly-half Chris Johnson has returned to Lockwood Park after a six-year break following a successful stint with Sale FC and head coach Gareth Lewis will be hoping Johnson can guide Field in the right direction as they aim to continue their impressive season so far.

Johnson was an integral part of Sale FC’s National Two North promotion last year and Huddersfield are firmly in the mix for a top two spot this term as they sit just three points off second placed Chester. The Yorkshire club have also won seven of their last eight matches, but hoping to burst their bubble will be Stourbridge. Neil Mitchell’s side occupy ninth place as things stand and inconsistency has really plagued their campaign this term. The Midlands outfit have won just two of their last six games so they will be keen to hit the ground running as we enter the final set of fixtures before the Christmas break.

Following back to back defeats, it came as no surprise to see Fylde head coach Warren Spragg delighted after his team’s victory against Stourbridge last time out. The Lancashire club have found life tough in National Two North after relegation from National One, but they will be eager to build on their recent win over Stour as they look to progress up the table from eighth place.

While Fylde have been able to recover from a dip in form, South Leicester have failed to find a winning formula. After a very positive start to the campaign, the men from Welford Road have won just one of their last eight games and their latest defeat against Chester saw them fall into the bottom three. South head to Woodlands this weekend having lost their last five games so they could do with a much-needed victory in the north-west on Saturday.

Before last week’s break in the season, Sheffield Tigers picked up a welcome win and did so in style. The Yorkshire outfit thrashed Macclesfield 54-7 to end a run of four consecutive defeats and their victory at Dore Moor moved them six points clear of the relegation places.

For our latest 'In Focus' interview, we spoke to Leicester Lions full-back @AlexWilcockson1 #Nat2n ?https://t.co/vJWJ3uLXEl

The Tigers can continue to distance themselves further from danger in Round 11 when they travel to a Leicester Lions side that is on the cusp of the drop zone as things stand. Andy Key’s men are one point clear of the trapdoor, but three wins from their last five games has seen them move out of the bottom three. However, the Lions have been unable back up those trio of victories and head into this fixture with Sheffield Tigers following successive defeats. With key fixtures to come for Leicester over the next coming weeks, they will be keen to gain a positive result at TMDP Park this Saturday.

Preston Grasshoppers’ last four matches have all been decided by a margin of eight points or less and in truth, narrow results have been the theme of their season once again in National Two North. With that in mind, the fact the Hoppers have picked up 13 bonus-points from their first 10 matches doesn’t come as a shock, but Preston do sit in 11th place which they may well be pleased with after promotion in April.

The Lancashire club have back to back home wins to thank for their position in the table and they now have a six-point gap between themselves and the relegation zone. They will be favourites to make it three wins on the bounce at Lightfoot Green this weekend when they host Peterborough Lions, who currently sit bottom of this division. The Lions have won on just one occasion since gaining promotion into the fourth tier and as things stand, they are 12 points from safety. Alarm bells haven’t started ringing at Bretton Woods just yet, but a second victory of the term is starting to become a necessity.

Tynedale’s search for their first away victory of the season goes on after they were beaten on the road in their rescheduled game against Chester last weekend. Ben Woods’ side battled hard at Hare Lane, but came up short which leaves them just three points clear of the relegation places heading into Round 11.

Here are the matches for this weekend! Who's excited!? #MRUFC ? pic.twitter.com/PI6am7NPc8

Tyne have the chance to clinch their maiden win on their travels this Saturday when they visit a Macclesfield side who are currently in the bottom three. The Blues sit nine points from safety as things stand, following just two wins all term so the Cheshire side will be hoping to turn their fortunes around as soon as they can. Macc were able to dig themselves out of trouble last year and a third home win of the season could be the catalyst they need to repeat that feat once again.