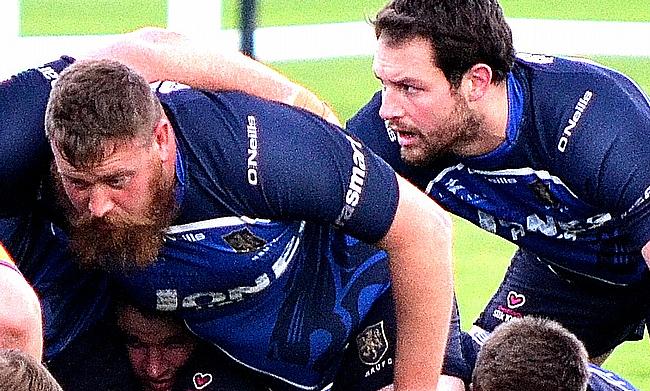 As we approach the halfway point of the season, there are just seven points separating the bottom five in National Two North meaning Round 14 is arguably the most crucial weekend in the season for teams looking to move away from danger.

Four of the bottom five sides come up against each other with Macclesfield (12th) hosting Luctonians (13th) and Sheffield (15th) travelling to Otley (14th) while the club at the foot of the table, Wharfedale, go to league leaders Hinckley.

Below George Chuter’s side, there is the second promotion clash of the month taking place as Tynedale look to continue their excellent recent form against Stourbridge while elsewhere towards the summit, Sale FC welcome Blaydon and Sedgley Park are at home to Leicester Lions.

It is top against bottom in National Two North this weekend as league leaders Hinckley welcome Wharfedale to Leicester Road. The hosts on Saturday must be coming into this fixture with thoughts of promotion creeping into their minds after a superb win over Stourbridge in Round 13. The 35-0 victory increased Hinckley’s winning streak to seven matches and that sort of performance demonstrated that George Chuter’s side certainly have the capabilities to really challenge for a top two spot this term.

Two years ago, Hinckley and Wharfedale were separated by a whole division, but now the tables have turned. Dale have found life difficult since relegation from National One in 2016 and once again, James Doherty’s side are struggling as they currently sit seven points from safety heading into the second-half of season. However, Doherty asked for a response from his players and last weekend they delivered as they edged out South Leicester. Doherty and the Dale faithful will be hoping their second win of the term breathes new life into this season and a victory in the Midlands on Saturday would definitely be catalyst for their campaign.

Second placed Tynedale are currently level on points with Hinckley, but their promotion credentials will be tested this weekend when they host fifth placed Stourbridge. Tyne  remain on the coattails of the table toppers after a less than comfortable victory over Luctonians last weekend and Scott Lawson will be fully aware that his side need to improve if they are to extend their winning run to five matches and keep the pressure on the league leaders.

NEXT HOME GAME: Tynedale vs Stourbridgehttps://t.co/xJK4DfD1Y9

As for Stourbridge, their season has really gone off the boil since we entered the final two months of the year. Having secured nine straight wins in September and October, Neil Mitchell’s side are suffering from the winter blues as they travel to the northeast this weekend having not won in their last four fixtures. That dramatic drop in form has seen the Midlands club slip from title challengers to outsiders, but it is far from over for Stour. After a loss to Hinckley last week, Stour have another opportunity to reignite their season as victory this weekend would leave them firmly back in the hunt for a promotion place.

Following defeats for Stourbridge and Sedgley Park in Round 13, Sale FC slid themselves into third place in the National Two North table after their fifth consecutive win. A comprehensive victory over Chester leaves Jonathan Keep’s side just two points behind the front-runners and with Tynedale also hosting Stour this weekend, Sale could well move into the top two for the first time this term.

After the heartbreak of missing out on promotion in the play-off last season, Sale are once again challenging for a spot in National One and they may have expected Blaydon to be competing for the same goal at the start of the campaign. However, the northeast side head to Heywood Road this weekend having won just four of their 13 matches following relegation from the third tier in April. Matt Thompson is now at the helm at Crow Trees and his side did claim an excellent victory over Sheffield Tigers last week, but to repeat that feat a place where Sale have lost just once in their last 22 league matches will be a tough ask.

Matt Bebbington would have been disappointed to see his Sedgley Park side fall to a defeat away at Huddersfield last Saturday, but the men from Park Lane must dust themselves down and go again when they host Leicester Lions this weekend. Sedge had won six of their last seven matches prior to their visit to Lockwood Park, but despite that loss, the Tigers are still only four points off the promotion places as we approach the halfway point in the season.

In recent years, Sedge’s promotion hopes have been undone by blips in form over the festive period so they will be hoping avoid a similar scenario this time around but Leicester Lions will be in no mood to hand out an early Christmas gifts. The Lions were beaten late on by Sheffield last Saturday which condemned Jack Heald’s men to back to back defeats so a fifth away victory of the campaign would certainly get the Midlands club back on the right path.

With Leicester Lions currently occupying ninth place in the table, the local bragging rights so far this term have gone to their neighbours South Leicester who prepare to entertain Chester this weekend. South sit sixth in the league standings, but they are just starting to fade away from the top five in the division after two games without a win.

Disappointing result but nice to make my 100th appearance for @RUFCChester and get a try ? #Chester#RUFC

Michael Holford’s side suffered a surprising defeat away at bottom of the table Wharfedale last weekend so they will be aiming for a reaction when Chester visit the Midlands on Saturday. The Cheshire side arrive at Welford Road in their worst form of the season so far. Just two wins from their last six games has seen them slip to 10th in the table and also their away results doesn’t make for pretty reading. Chester have won just once on the road this term, but that victory did come in their last outing against Sheffield Tigers so Nick Joseph’s team will hoping for a repeat of that result.

It was an inspired performance from Huddersfield fly-half Harry Davey which guided Gareth Lewis’ men to their fourth straight victory last weekend. The 18 year-old scored 29 of Field’s 32 points against Sedgley Park to add yet another highlight to this wonderful season the Yorkshire club are having. The men from Lockwood Park were promoted back into this division in April and they are certainly making an impact back in the fourth tier of English rugby.

Huddersfield have won seven of their 13 matches so far this term and hoping to spoil their excellent recent run will be Sheffield Tigers. Jamie Broadley’s side had their own positive sequence of results ended by Chester at the end of last month and the Tigers are yet to respond from losing their five match winning streak. Defeat away at Blaydon last Saturday would have been tough to take, but back at Dore Moor, the Tigers will be itching for a response as they aim to go above Huddersfield with a win.

Defeat at Otley last weekend was not the ideal way Macclesfield would have wanted to begin a tricky festive period. The Cheshire side fell to a 23-17 loss at Cross Green meaning they have won just one of their last nine matches heading into this fixture with Luctonians. Macc announced this week that Giles Heagerty has stepped down as Head Coach meaning Marshall Gadd will take interim charge for the Blues who currently sit just one point clear of the bottom three after relegation from National One in April.

Luctonians are a place behind Macc in the table, but level on points with their hosts as they prepare for what could be a crucial fixture in the season. Head Coach Ryan Watkins was rightly pleased with his side’s performance against second placed Tynedale last weekend which saw the Lucts push the possible promotion hopefuls all the way. Now, the key for the Herefordshire outfit is to put in that same kind of display at Priory Park this Saturday as they look to end an eight game losing run.

For both Otley and Sheffield, they had the perfect start to December. Both of these sides currently occupy positions in the relegation zone, but their performances last weekend have given them a huge boost. In term of Otley, they put in a fine display against Macclesfield to secure their first win since the middle of September which means they are now just one point adrift of safety.

With Macclesfield playing Luctonians this weekend it means a second consecutive victory for Otley – for the first time since February – could see them move out of the bottom three, but Sheffield will have other ideas. Last time out, the men from Abbeydale Road snatched their second win of the campaign away from Leicester Lions which means they are now just six points away from climbing out of danger. A victory at Otley this weekend would certainly see Sheffield’s confidence grow and they will believe that they can avoid immediate relegation back down to the fifth tier.