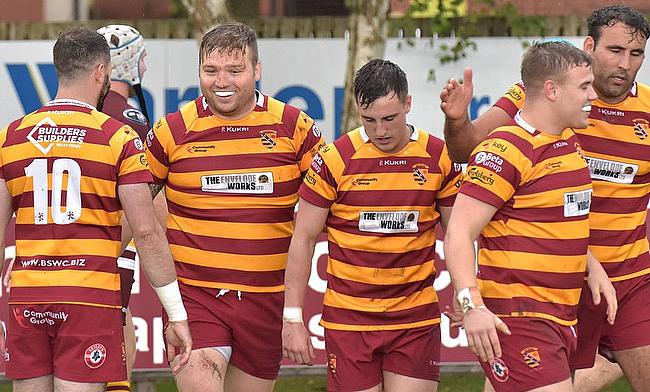 Caldy maintained their winning start to the National Two North season, but they had to battle past Loughborough Students in Round Four. (Photo Credit: Chris Farrow)

The Wirral outfit have won all four of their matches since relegation from National One and they remain on top of the division heading into October.

Fylde are now the only other side yet to be beaten this term as a superb victory over Huddersfield lifted them to second spot in the table.

Stourbridge are up to third after returning to winning ways against Otley, but also because Sedgley Park suffered their first defeat of the season as they lost to Tynedale at home.

Caldy beat Loughborough Students to secure a fourth successive victory in a thrilling game in the Midlands.

Ben Jones and Gavin Roberts kicked 19 points between them as the Wirral outfit edged past the Students.

Matt Wilkinson’s try helped Loughborough lead 10-9 at the break, but John Parker’s effort shortly after the restart nudged Caldy ahead.

The topsy-turvy nature of this fixture continued as Will Kaye’s score cut Caldy’s lead to 30-25, but a penalty apiece for both sides is how the contest ended as the visitors completed a perfect September.

Fylde are now up to second in National Two North as they maintained their unbeaten start by comfortablely seeing off Huddersfield.

The hosts began quickly as Adam Lewis and Tom Carleton both touched down to give Warren Spragg’s side a 12-0 lead inside the opening 10 minutes.

Huddersfield replied through the boot of Will Milner, but Fylde stretched their advantage before half-time as Ben Gregory plunged over.

After the restart, Fylde continued to impress as Connor Wilkinson (2) and Alex Loney all crossed whilst Huddersfield’s only try of the afternoon came on 79 minutes through Callum Thompson.

Stourbridge held off a late Otley fightback to earn a bonus-point win at Cross Green.

Stour led 14-13 at the break as tries from Dan Rundle and Afeafe Haisila outweighed two Ben Smith penalties and a Henry Roberts try.

Joe Heatley and Rundle scored Stour tries after the interval and Chris Scott also landed a penalty to give the visitors an 18-point advantage.

However, the Midlands club survived a late scare as Brett Mitchell and Jack Mackie both charged over for Otley, but the hosts were unable to snatch the victory.

Tynedale ended the month by sealing their opening victory of the season as they inflicted a first defeat on Sedgley Park.

The one bit of joy from yesterday’s match @SedgleyTigers pic.twitter.com/l2FvdzIc0u

A Liam Checksfield try, converted by Jake Rodgers, gave the visitors a 7-0 lead and Joe Richards went over to extend their advantage after the interval.

Jamie Harrison’s effort on the hour brought Sedge back into the encounter, but Scott Barrow’s side were could not add to their tally as their winning run came to an end.

Preston Grasshoppers have now secured successive victories as they concluded September with a narrow win over Sheffield Tigers.

Hoppers, who beat Scunthorpe at Lightfoot Green in Round Three, were actually 6-0 behind at the break as Mark Ireland slotted two penalties after missing earlier efforts.

Tyler Sloane’s try shortly after the interval edged Preston in front, but another penalty from Ireland gave Sheffield Tigers the lead once again.

The fly-half saw another penalty go off target and Preston’s Alex Hurst also couldn’t bisect the posts with his attempt nine minutes later.

However, Hurst’s second effort was successful and it proved to be enough for Preston to seal their second win of the campaign.

Hinckley battled past Hull to earn their second win on the spin and also end the hosts’ unbeaten start to the National Two North campaign.

Hinckley secured an excellent win at the previously unbeaten @hullrugbyunion on Saturday – Ashworth got a late double with @Bigdogpeck @Luke_Coltman @Joeglover9 and Skerritt also scoring – these are the highlights pic.twitter.com/qNjcjyYaLO

Alex Heard’s try and eight points from the boot of Reece Dean saw Hull hold a 13-12 lead shortly after half-time.

Jamie Skerritt and David Peck had crossed for Hinckley in the first period and the visitors were able to cut loose in the second 40.

Scott Hamilton, Luke Coltman and Oliver Ashworth (2) all went over to clinch the victory for the Midlands club whilst Latu Makaafi scored a consolation for Hull.

Chester clinched their second win on the bounce as they defeated Luctonians despite a spirited fightback from the hosts.

Alick Croft barged his way over to give Chester an early lead at Mortimer Park and the hooker was on the scoresheet again, alongside Andrew Oakden, as the visitors led 19-0 at half-time.

Harrison Vare’s try kept Luctonians at arm’s length, but when Josh Watkins scooted over with seven minutes remaining, it set up a tense finale. However, Chester were able to hold on and end the month on a positive note.

Wharfedale were awarded two penalty tries as they defeated Scunthorpe at Heslam Park.

The Greens had suffered back-to-back defeats against Sedgley Park and Fylde, but this was a positive way to conclude September.

Dale led 7-5 at the break as a penalty try cancelled out James Walker’s early score.

A Harry Bullough effort and another penalty try, either side of a Jack Blakeney-Edwards’ penalty, was enough for Wharfedale to seal the win in Lincolnshire.