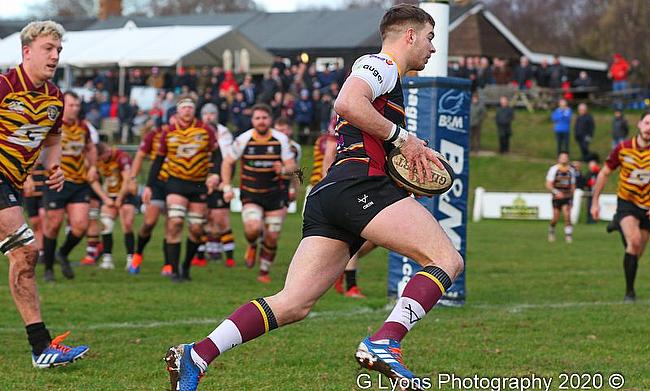 Caldy opened up a 17-point lead at the top of National Two North following a comfortable victory over Otley in Round 21. Photo Credit: (Gareth Lyons)

Gareth Davies’ side are edging closer to an immediate return to National One after extending their unbeaten and winning run to 20 matches.

The title is seemingly all but Caldy’s whilst the race for second spot continues to throw up twists and turns, with Fylde stumbling against an in-form Hinckley whilst Sedgley Park closed the gap after beating Chester.

Down at the bottom, it is arguably even more tense. Preston Grasshoppers’ hopes of staying in this division took another blow on Saturday as they lost to Tynedale, but wins for Hull, Luctonains and Wharfedale have boosted their respective survival bids.

Despite Huddersfield losing to Dale, they remain outside drop zone as Otley slipped into the bottom three following their defeat to Caldy.

Elsewhere, Stourbridge claimed one of the more eye-catching results of the weekend as they thrashed Scunthorpe.

Caldy continued their march towards the National Two North title with a dominant bonus-point win against Otley.

Gareth Davies’ side secured their 20th consecutive win of the campaign as they ran in five tries at Cross Green.

Touchdowns by Ben Jones, Jacob Ainscough and Nick Royle gave the runaway league leaders a 17-7 advantage, with Josh Hall going over for Otley.

Tries from JJ Dickinson and Gavin Roberts secured yet another victory for Caldy whilst Hall’s second was a consolation as Otley dropped into the bottom three of the division.

Hinckley extended their winning run to six matches against Fylde as they dented the Lancashire club’s faint hopes of automatic promotion.

The visitors had opened up a 15-point lead by half-time thanks to tries from scrum-half Ben Pointon and winger Callum Dacey.

However, after the break, the the Hornets shot themselves in the foot as two yellow-cards allowed Fylde to hit back.

Fylde disappoint against @Hinckley_Rugby. Match report at https://t.co/ybTGfxKiPk@spraggio "At half-time we were up against it. 2nd half we responded in just the right way. We took attack to Hinckley, played with more pace, scored 3 good tries to lead. And then we stopped!" pic.twitter.com/ZqcwI2HYKG

Tom Carleton, Chris Briers and Phillip Mills all crossed to give the home side the lead, but Hinckley were able to muster up a response.

Matthew Lasis’ try edged the away side ahead before Oli Povoas’ score three minutes from time sealed another excellent win for the Midlands club.

Defeat for Fylde leaves them 17 points behind leaders Caldy so Warren Spragg’s side may now shift their attention to finishing in second spot.

Sedgley Park bounced back from their humbling defeat against Hinckley by claiming a victory over Chester.

After seeing both Will Lees and James Harper yellow-carded early on, Gene Ormsby (2) and Leon Simpson scored first half tries for Sedge to give the hosts an 18-0 lead.

Two tries either side of the break from second-row pairing Harry Wilkinson and James Lloyd brought Chester right back into the contest, but Ollie Glasse darted over 12 minutes from time to seal the win, which leaves Sedge just four points behind Fylde with a game in hand.

The second period then burst into life as scores from Latu Makaafi and centurion Lee Birch gave Hull a 16-point lead.

The Students hit back with three unconverted tries from Fergus Guiry, Charlie Hudson and Sam O’Leary-Blade, but Keane Naylor and Will Hall came off the bench to ensure a vital victory for the home side.

After suffering a heavy defeat against Fylde in Round 20, Stourbridge responded in some style as they hammered bottom of the table Scunthorpe.

Stour flew out of the blocks as tries from Joe Heatley and Jack Lea gave the visitors and early 12-0 lead.

The away side continued to put their foot down as Dan Rundle, Mark Harrison and Llyr Griffiths crossed for 33-0 advantage at half-time.

Jacob Hardy got one back for Scunthorpe, but Stour stayed ruthless as Josh Trinham, Stefan Thorp, Lea (2), Rundle, Arthur Morgan and Chris Scott all went over in the second period.

Gareth Mist and Paul Cook did dot down for Scunthorpe, but this was a 20th straight defeat for the Greens.

Preston Grasshoppers’ hopes of beating the drop in National Two North suffered another setback after they lost to Tynedale at Lightfoot Green.

Tyne led 14-7 at the break with Jake Rodgers and Ben Haigh crossing for the visitors while Preston responded through an Oliver Trippier converted try.

A Rodgers penalty ultimately wrapped up the win whilst Alastair Murray’s late try was merely a consolation for Hoppers, who are now 16 points from safety.

In recent weeks, the battle for survival has intensified and Ryan Watkins’ side are still keeping their heads above water after three wins from their last four matches.

A great result on Saturday from our 1st XV. Another game at Mortimer Park this week! #Luctonians pic.twitter.com/G7lKP2wbDA

The hosts did trail 7-5 at half-time as Josh Watkins’ try was cancelled out by a converted Alan Symcox effort.

However, the second-half belonged to the Lucs as Watkins, Francis Kelly and Drew Cheshire all crossed to secure another superb triumph for the Herefordshire outfit.

Wharfedale boosted their survival chances in National Two North after securing a gritty win over rivals Huddersfield at the Avenue.

Matt Speres scored the game’s only try on the stroke of half-time and his effort was enough to hand the Greens a potentially crucial win in their battle to avoid the drop.

Jack Blakeney-Edwards also landed a penalty, whilst three points from the boot of Will Milner was all Huddersfield could muster up.

Victory for Dale means they are now six points clear of the drop whilst Huddersfield sit just two points above the trapdoor.