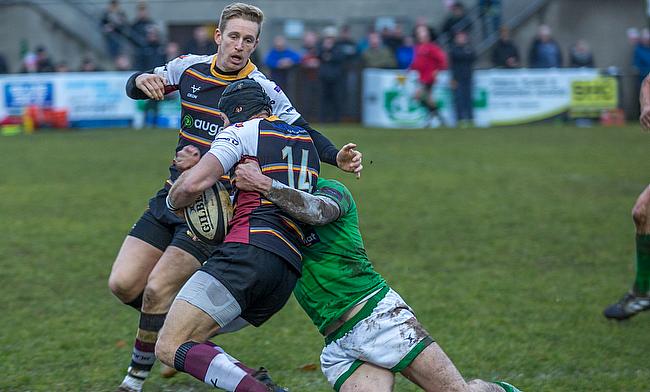 Caldy’s incredible winning run in National Two North continued in Round 12 and their 11th successive victory of the campaign was also enough to see them move to the top of the division. Photo Credit (John and Rowena Burridge)

Gareth Davies’ side are yet to put a foot wrong this term and their latest triumph over Wharfedale means they are now two points clear at summit, with a game in hand, after promotion rivals Fylde were stunned by Hull.

The Yorkshire club became the first team to defeat Fylde at Woodlands this season as the title race took its first significant twist of the campaign.

Third-placed Sedgley Park are just six points off the top two following an impressive display against Otley whilst down at the bottom, the picture has also changed.

Preston Grasshoppers find themselves in the relegation zone after losing to Loughborough Students whilst Hull’s win means Gary Pearce’s side are now two points clear of the drop. Luctonians have also boosted their survival bid as they cruised to a victory over rivals Scunthorpe at Heslam Park.

Elsewhere in the division, Sheffield Tigers’ fine form continued against Stourbridge, Tynedale beat Hinckley and Huddersfield rescued a draw at home to Chester.

Caldy have moved back to the top of National One as they defeated Wharfedale to earn their 11th successive victory.

Ben Jones and Jack Blakeney-Edwards exchanged early penalties, but it was the former who was able to land a second kick which helped Caldy into a slender half-time advantage.

The visitors then moved further in front as Cameron Davies scooted over almost immediately after the interval, but a yellow-card shown to Ed Stagg saw Dale capitalise on the extra man.

A penalty from Blakeney-Edwards was swiftly followed by George Hedgley’s try to make it 11-11, but the tables quickly turned in Caldy’s favour as Dale’s lack of discipline was punished.

Hedgley was sent to the sin-bin on 62 minutes and Caldy took full advantage as JJ Dickinson crossed and his score proved to be enough to send his side to the summit of the division.

Mike Adlard’s try just after the hour was the difference as Hull stunned Fylde to knock the Lancashire side off top spot.

Adlard had opened the scoring for Hull after just two minutes at Woodlands, but a penalty from Greg Smith, as well as scores by Jacob Connor and Scott Rawlings, put Fylde 17-5 ahead.

The long trip home should be an enjoyable one. 🍺🍺 🍺

Stephen McColl’s try on 22 minutes brought Hull back into the contest, however, another Smith penalty moved Fylde eight points in front.

But that was as good as it got for the hosts as they were unable to add to their tally after the interval. Reece Dean landed a penalty for the away side and a superb victory was ultimately sealed on 62 minutes as Adlard raced over for his second.

Fylde, who hadn’t tasted defeat at home prior to Round 12, tried to muster up a response but Hull stood firm to see out the win.

Sedgley Park ran in seven tries as they picked up an excellent bonus point win over Otley.

Ollie Glasse touched down twice for the home side, with Adam Cheshire, Jamie Harrison, Matt Gallagher, James Harper and Danny Openshaw also dotting down for the rampant hosts.

Fly-half Steve Collins notched up 12 points with the boot for Sedge on an excellent afternoon for Scott Barrow’s men.

Otley’s try scorers were Henry Roberts and Ben Smith, but the Yorkshire club slipped to their second defeat on the bounce.

The Yorkshire club have now picked up six wins from their last seven games and they are 10 points off the top two as things stand.

A brace of penalties from Mark Ireland and a score from Jamie Broadley put the Tigers 13-7 ahead at half-time, after Mark Harrison had given Stour the lead on 12 minutes.

The hosts began the second period as they did the first and moved in front thanks to Nigel Mukarati’s effort.

Sam Wilson also landed a penalty to move Stour four points clear, but a try from Henri Packard on 58 minutes proved to be enough for the Tigers to leave the Midlands with a victory.

Seamus Hutton and Harry Snowdon crossed inside the first 10 minutes to give the North-East outfit the perfect start, but Hinckley were able to tie things up before the interval as Rory Vowles and Alex Salt went over.

The visitors edged themselves ahead following a penalty from Tom Wheatcroft, but the Hornets had no response to Tyne’s retaliation as the hosts secured the win thanks to a Jake Rodgers penalty and Will Miller’s try eight minutes from time.

Preston Grasshoppers have slipped into the bottom three of National Two North after falling to a home defeat against Loughborough Students.

Will Kaye, Karl Main, Archie Bourne and Luke Crampton all crossed the line for the Students, who also saw Will Lane go over in the second period during an impressive performance.

Hoppers did drag themselves right back into this contest after half-time as scores from Chris Taylor and James Gough, either side of a penalty try, saw Loughborough’s lead cut to just three points.

However, Owen Waters landed a penalty and converted Lane’s try to help the Midlands club to all five points.

Will Milner’s penalty 10 minutes from time was enough for Huddersfield to earn a draw with Chester at Lockwood Park.

Tries from Will Du Randt and Harry Wilkinson (2), plus nine points from the boot of Shay Owen, had given Chester a 24-17 lead in Yorkshire.

But Huddersfield – who crossed through new signing Charles Morgan and Liam Stapley in the first 40 – hit back as Lewis Workman’s effort made this enthralling contest all square.

A second penalty from Owen nudged Chester in front on 66 minutes, but the final points of the day came from Millner as his kick saw Field seal their third draw of the campaign.

Luctonians’ excellent recent performances finally yielded a win in Round 12 as they brushed aside Scunthorpe.

The Lucs, who have run Otley, Sedgley Park and Fylde extremely close this month, were ruthless in Lincolnshire as they established a 26-3 half-time lead.

Louis Silver, Aiden Cheshire and Frank Kelly (2) scored tries with Paul Cook slotting over a penalty for the hosts.

The away side put the gloss on an impressive performance as Kelly completed his hat-trick before Matt Hackley got in on the act.

Scunthorpe did claim a try of their own through Jack Scorer, but Luctonians had done the damage in the opening period.