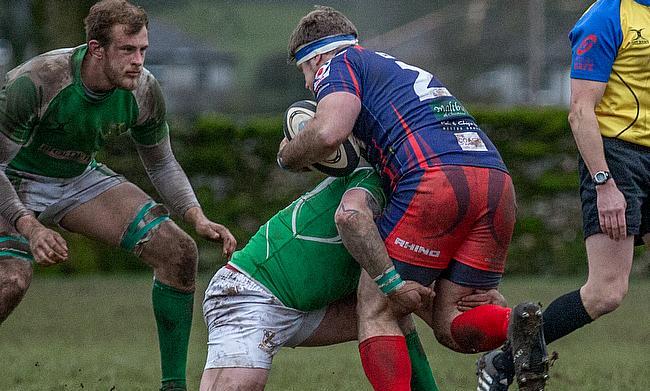 Hinckley will be gunning for their sixth straight victory in National Two North this weekend when they take on South Leicester.

George Chuter’s side have been faultless so far this season and they currently hold a three-point lead over the rest of their early promotion challengers.

Last weekend, Hinckley showed their clinical edge against Stourbridge as they scored five tries to see off their Midlands compatriots and extend their unbeaten start to the season. The Hornets ended September having won all five of their fixtures and they currently sit three points clear at the summit of National Two North heading into October.

Visitors @Hinckley_Rugby proved too clinical for @StourbridgeRFC. Relive the action in this week’s #Stourbridge #Chronicle pic.twitter.com/7lImWYHpmo

George Chuter’s side are back on home turf this Saturday and they host another Midlands club in the form of South Leicester. The visitors take the half an hour journey to Hinckley on the back of a hard-fought win over Peterborough Lions in Round Five and South look in good shape after the first month of the campaign. Geraint Davies’ men occupy sixth place as things stand and they will be keen to continue their solid start to the season by becoming the first side to inflict a defeat on the league leaders.

Four wins from their first five games reflects a very decent start to the season for Sedgley Park. Question marks were raised about whether their play-off defeat last term would affect them, especially after falling to a loss in Round Two against Wharfedale, but Matt Bebbington’s side have answered back emphatically with three straight wins and 21 tries scored.

Last year’s National Two North silver medallists will be keen to continue their excellent recent form and they are firm favourites to do so when they visit Leicester Lions this Saturday. Both Sedge and their hosts were challenging for promotion two season’s ago, but things haven’t gone to plan for the Lions since then. The Midlands club finished just five points clear of the relegation zone last term and this year, they are still searching for their first win. In total, Andy Key’s side have lost their last 12 matches (a run which stretches back to March), but can the Lions roar back into life by securing their maiden triumph in Round Six?

After suffering their first loss of the campaign against Hinckley in Round Four, Hull Ionians responded last weekend by beating Wharfedale at Brantingham Park to end September just one point outside the top two places. The I’s were relegated from National One back in April and they will have their sights firmly set on an immediate return to the third tier, especially after a solid start to this term.

The Yorkshire outfit are once again on home turf this Saturday when they entertain Stourbridge. Neil Mitchell’s side could well be one of the teams challenging for promotion alongside Hull Ionians come the end of the season, but right now, Stour currently sit ninth. However, they are only six points off second place and have won three of their first five games so a victory against one of the candidates for a top two spot would be an excellent start to October for Stourbridge.

Chester are back in action this weekend following their postponement against Tynedale in Round Five. The men from Hare Lane will be eager to take to the field after beginning the season with four straight victories and they will be hoping their momentum continues when the third placed side travel to newly promoted Peterborough Lions this Saturday.

The Lions are getting closer to their maiden victory in National Two North. Last week, they put in a very positive display against South Leicester to clinch their first points of the season and now the next step is gaining their first win. Last term, Simon Moyle’s side won 11 times at Bretton Woods on their way to promotion so they will be keen to recapture that form as soon as possible, starting with the visit of Chester.

Fylde head coach Warren Spragg said he was “gutted” after his side fell to a late defeat against Sheffield Tigers in Round Five. The Lancashire club, who were relegated to National Two in April, outscored the Tigers by four tries to one, but still saw a home victory slip away from them which would have been a frustrating way for the men from Woodlands to round off September. However, Fylde are only three points off the top two heading into October and next up is a trip to Tynedale.

It has been a difficult week for Tyne. They had to postpone their Round Five fixture with Chester after a confirmed case of the MRSA infection within the club, but on Wednesday, Tynedale announced that they had been given the go ahead to return to action this weekend. In terms of their league season, Tyne are still searching for their first win of the campaign and a victory at Corbridge in Round Six would be a great way to conclude a tough seven days or so for the club.

The boot of Mark Ireland helped steer Sheffield Tigers to a superb victory over possible promotion candidates Fylde in Round Five. The Yorkshire club have made an impressive start to the new season and come into October having won three of their last four matches. Jamie Broadley’s side seem determined to kick on this term after a fairly solid campaign in 2017/18 and they will be hoping to continue heading in the right direction when they take on Huddersfield this weekend.

Field take the short trip to Dore Moor also in fine form. Following two narrow defeats to begin the term, Gareth Lewis’ side have won their last three matches and are now level on points with the Tigers going into this all-Yorkshire affair. Huddersfield did win this corresponding fixture 36-33 last year so we should be in for another entertaining battle this Saturday.

Otley produced one of the stories of Round Five across the National Leagues. After trailing 25-7 just after half-time against Preston Grasshoppers, the Yorkshire club completed a quite remarkable comeback to snatch a 28-25 victory at Cross Green to secure their third win from their last four matches.

It has been a very sound start to the season for Tom Casson and Charlie Maunder and they will be hoping that continues when they visit Macclesfield this weekend. Whilst Otley sit 10th in the division, Macc remain in the bottom three and still without a win this term. Marshall Gadd’s side were thumped by Sedgley Park last Saturday and the Blues are looking short on confidence at the moment. However, the Cheshire side have the quality to respond from a difficult September and they will be hoping to react immediately at Priory Park this weekend.

After back to back wins to begin the new season, Wharfedale will be disappointed to be entering October following three straight losses. Rob Baldwin’s side have fallen to Hinckley, Otley and Hull Ionians in recent weeks, but Dale can take positives from all of those fixtures as the highest margin of defeat was only nine points. The Yorkshire outfit have battled against the drop over the last couple of seasons so they will want to stop this mini slide as quickly as possible.

Securing a victory over Preston Grasshoppers would be the perfect tonic for Wharfedale, but I suspect the Hoppers will visit the Avenue fired up. Over the last three rounds, Paul Arnold’s men have seen winnable matches snatched away from them and to see a 25-7 advantage not be converted into a victory against Otley last weekend, would have hurt the newly promoted side. Preston will be wanting to serve up a reaction this Saturday as they go in search of their second victory of the campaign.