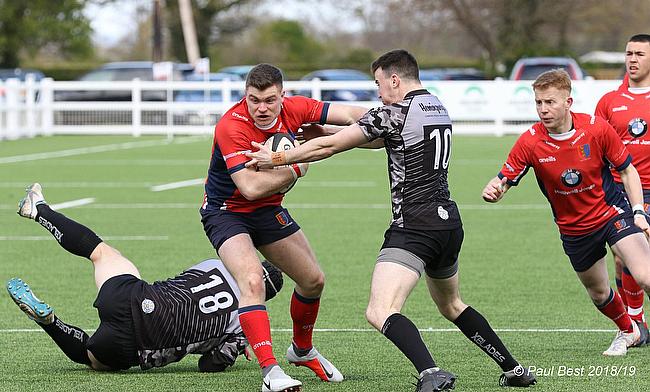 Chester will be looking to maintain their excellent recent form when they travel to Preston Grasshoppers on the final day of the National Two North season.(Photo Credit: Paul Best)

Chester beat Otley in Round 29 to confirm their spot in the National Two play-off where they will meet Canterbury on May 4th.

For now, Jan van Deventer’s side will be keen to carry some momentum into next weekend, but they do face a Preston side that has lost just twice in their last 12 fixtures.

Elsewhere in National Two North, Hull Ionians will play their first game as confirmed champions when they travel to Sheffield Tigers whilst Huddersfield and Sedgley Park do battle for third spot on Saturday.

Also across the division this weekend, Tynedale complete their strong season against Hinckley, Fylde go to Otley and Wharfedale host Peterborough Lions. Meanwhile, Stourbridge visit Leicester Lions and two of the relegated sides meet in the Cheshire when South Leicester take the trip to Macclesfield.

There is likely to be a celebratory atmosphere in Yorkshire this weekend when Sheffield Tigers host National Two North winners Hull Ionians. The I’s clinched the title two weeks ago as they battled back from a slow start to defeat Leicester Lions and Martyn Wood’s side will be making an immediate return to National One.

Their title winning season began back in September with a 35-33 win over the Tigers and the hosts this weekend will also be able to relax after securing their National Two North safety in Round 28. An excellent win over Peterborough Lions confirmed another season at this level and Jamie Broadley’s side will be keen to end the campaign on a high against the newly crowned champions.

Full steam ahead for the National Two play-off. Chester confirmed second spot in Round 29 after a very professional display against Otley and Jan van Deventer’s side are now preparing for a shot at National One against Canterbury next weekend. The Cheshire outfit have won five of their last six matches to seal a top two finish and they will be eager to continue their good form when they take on Preston Grasshoppers on Saturday.

“It’s all about positive momentum to take into the next game and we need to take a big performance into what will be this club’s biggest fixture for a long time.” @RUFCChester coach Jan Van Deventer is eyeing a winning end to his side’s league campaign. https://t.co/Sh1j3LJAii

No matter what happens on May 4th at Canterbury, Chester have had a superb season and Preston Grasshoppers have also performed brilliantly this term. Paul Arnold’s men were promoted from North Premier last year and on their return to National Two North, they haven’t looked back. Hoppers have never been close to a relegation battle and a top seven finish is guaranteed following 10 wins from their last 12 games. Preston could also end the season above fierce rivals Fylde so that will be added motivation for them in their final fixture of the term at Lightfoot Green.

With promotion and relegation all done and dusted for this season, the majority of the attention in National Two North this weekend will be on Sedgley Park v Huddersfield. The visitors on Saturday travel to Park Lane after a really strong season and now all their attention is on concluding the campaign in the top three, which is where they currently sit in the table.

At times this season, Huddersfield were in the race for promotion but last year’s play-off finalists, Sedgley Park, have rarely had the top two in their sights. Plighted by injuries and inconsistency, Matt Bebbington’s side stumbled towards the Christmas break, but 2019 has been superb for Sedge. The Tigers head into this weekend on an eight-game winning streak and they are level points with Huddersfield so for the bronze medal, it is winner takes all on Saturday.

Whilst the battle for third place occurs between Sedgley Park and Huddersfield, Tynedale will be hoping to sneak into the top four on the final day of the campaign. On their club website, they mention it has ‘generally been a very good, entertaining season’ for the North-East side and it is hard to argue with that notion, especially in the second half of the year. Ben Woods’ side were inconsistent before Christmas, but 11 wins from their last 14 games has completely changed the outlook on their term.

Tyne are in a great position to build for next season and Hinckley will also be focusing on 2019/20 after a mixed campaign this year. The Hornets enter the final day following a thrilling win over Sheffield Tigers last time out and unsurprisingly, it came on their own turf. Hinckley have been pretty much faultless at Leicester Road all season, but it has been their away form which has halted their progress. The Midlands club have won just three of their 14 matches on the road so a victory at Corbridge would be a pleasing way to complete the term.

Sixth-placed Fylde travel to Otley (7th) on the final day and both teams will be keen to end the season on a high after a torrid conclusion to the term. The visitors were well and truly in the hunt for a top two finish at the beginning of March but four straight defeats ended their hopes of an immediate return to National One and now Warren Spragg’s side will be itching to taste that winning feeling again in Round 30.

The Lancashire club may also be aware of rivals Preston Grasshoppers sitting level on points with them so that might spur Fylde on to get the job done in Yorkshire this weekend. In terms of their hosts, they were also performing well at the start of last month but like Fylde, four losses on the bounce has taken the wind out of Otley’s sails. A points deduction hasn’t helped matters either for the men from Cross Green, but this has still been a very strong season for Charlie Maunder and Tom Casson’s side so they will be hoping to finish off with a victory.

Over the last couple of seasons, Wharfedale have been embroiled in relegation fights which they have managed to clamber out of, but this year, they conclude the campaign in comfort and in high spirits. Rob Baldwin and Jon Feeley’s side secured their 15th win of the season on Easter Saturday as they defeated Stourbridge and Dale have now racked up their highest points total for nine seasons.

The Greens have been very good this term and they will want to finish off in style this weekend. The final visitors to the Avenue are Peterborough Lions, who have had a really tough season. Their relegation back down to the fifth tier was confirmed at the start of March and the men from Bretton Woods have managed just four wins all term. The Lions will now be eager to complete the year with a bit of pride as they travel to Yorkshire looking for their first away victory of the season to round off their National Two North journey.

Stourbridge’s season could be summed up if you just look at their last two months of results. Inconsistency, as well as injuries, as been a major problem for Neil Mitchell’s side this term and three wins and three defeats since the start of March tells you all you need to know. Stour have won 13 times this season and 11 of them have been at home and last weekend’s away defeat at Wharfedale was not a new experience for the Midlands club.

They will be hoping to end the campaign with a rare victory on the road as they take the 60-mile trip to Leicester Lions. The hosts, who sit 12th in the table, are one place and five points behind Stourbridge heading into the final day and they may well be confident of signing off from this season with a victory at TMDP Park. The reason for that is because they performed admirably against the newly-crowned champions Hull Ionians last time out and if the Lions put in a similar display on Saturday, they could claim the bragging rights in the last all-Midlands affair of the season.

At one stage during this campaign, this clash between Macclesfield and South Leicester could have been season-defining as the sides looked to avoid the drop. However, as Round 30 is upon us, both teams were unable to escape the bottom three and relegation was confirmed at the beginning of April. Since dropping down from National One in 2017, Macc have really struggled in the fourth tier and now they will be preparing for life in North Premier and you have to think they will be eager to bounce back.

As for South, their four-year stint at this level came to an end despite beating Otley in Round 28 but like Macc, they have just been unable to string a sequence of positive results together for a sustained period. Combined, both clubs have won on just 13 occasions this term so they will now be eager to end their respective campaigns with a victory before they enter the fifth tier.