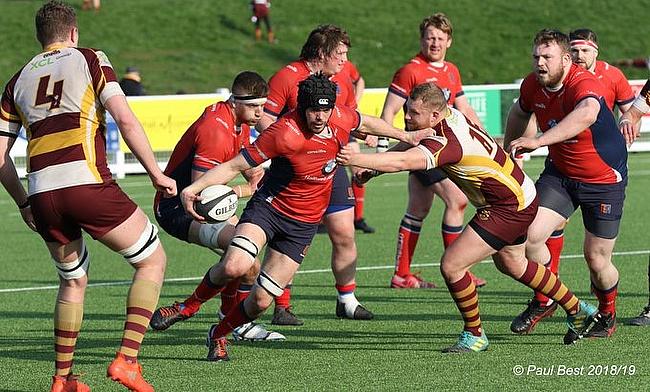 Chester were able to take a huge step towards a top two finish in National Two North as they hammered rivals Huddersfield in Round 27.

Jan van Deventer’s side have beaten both Field and Fylde over the last two weeks and those significant victories has left them 11 points clear of their rivals.

Added to this, Chester are also level on points with league leaders Hull Ionians who defeated Preston Grasshoppers on Saturday as the race for automatic promotion now seems to be a two horse-race.

Down at the bottom, defeats for both Macclesfield and South Leicester has left them on the brink of relegation while there were wins for Wharfedale, Stourbridge, Tynedale and Leicester Lions.

Hull Ionians remain on course for the National Two North title as they battled to a victory over Preston Grasshoppers at Brantingham Park.

The I’s are now level on points with second placed Chester, but the top two have a gap of 11 points between themselves and the rest of the field.

Martyn Wood’s side held a 22-0 lead on 53 minutes as Ben Stephenson, Toni Kuku and Lewis Minikin all touched down, with the latter also kicking seven points.

Hoppers then fought back in the final quarter as Tyler Spence and Matt Lampery crossed, but their efforts had come too late as Hull saw out the win which keeps them at the summit.

Chester ran in nine tries, including a Shay Owen hat-trick, as they thrashed Huddersfield to take a huge step towards a top two finish in National Two North.

Sean Green put the hosts ahead with their first try of the afternoon before Huddersfield hit back through Joe Green’s converted effort and Chris Johnson’s penalty.

However, Chester regained the lead as half-time approach with Owen grabbing his first score of the day.

The second-half then belonged to Chester as David Ford (2), Owen (2), Green, Rhodri Parry and Tom Foden all touched down to put the icing on a superb victory for Chester.

Jan van Deventer’s side now sit level on points with league leaders Hull Ionians as we enter the final three games of the season.

Fylde’s hopes of finishing in the top two in National Two North suffered a major setback on Saturday as they were narrowly beaten by Wharfedale.

Tries from Dan Stockdale and Oli Cicognini gave Dale a 14-13 interval advantage, with Greg Smith kicking eight points for Fylde and Henry Hadfield going over for their only score.

The second half was a battle for both sides, but neither could add to the scoreboard as Dale held on for the win whilst Fylde’s hopes of an immediate return to National One look like they are over as they now sit 11 points behind second-placed Chester.

South Leicester’s time in National Two North is almost over as they fell to a seventh straight defeat against Sedgley Park.

Sheffield Tigers’ 36-19 loss to Tynedale means South can still mathematically avoid relegation, but they must pick up consecutive bonus-point victories from their three remaining games to stand any chance of beating the drop.

Stourbridge proved too strong for Otley as they recorded a crushing bonus-point win in the Midlands.

Stour continued to be dominant after the restart as a brace from Joe Heatley and Luke Veebel’s effort kept the home side in the ascendency.

Otley produced a small burst as Adam Malthouse and Josh Hall both touched down, but Stour had the final say on proceedings as Rundle completed his hat-trick.

Sheffield Tigers’ status in National Two North is still not 100 per cent confirmed for next season after they suffered a defeat against Tynedale in Round 27.

The Yorkshire club were 19 points down inside the first 27 minutes as Edward Cawthorn, Will Miller and Morgan Passman all crossed.

A try for Tobias Williams reduced the half-time score to 19-7, but Tyne put their foot down after the interval as Passman completed his hat-trick.

Sheffield Tigers’ Jamie Broadley scored either side of Liam Checksfield’s try, but the visitors couldn’t snatch a bonus-point, meaning they are 14 points clear of the relegation places with three games to go.

It is very unlikely they will be dragged into the drop zone and just two points from their next fixture with bottom of the table Peterborough Lions would keep the Tigers in National Two North for another year.

Macclesfield battled back, but it wasn’t enough for them to snatch a victory away at Hinckley as the Blues’ time in National Two North is almost at an end.

With Macc needing to win to stand any real chance of avoiding relegation, it was Hinckley who scored first half tries through Ben Pointon (2) and Ollie Povoas.

But, the Hornets did concede a try before the break as Myles Hall raced over and Macc were on top after the interval, even an injury hit side.

Tries from Jonny Mason and Jordan Simpson, either side of a Joe Wilson penalty, made it 24-22 and when Hinckley’s Aaron Phillip was shown a yellow-card, Macc had the momentum.

However, the Cheshire club couldn’t find that final finishing touch as Hinckley held on while Macc now sit 14 points from safety with three games remaining.

Leicester Lions had to come from behind in the second half to defeat a spirited Peterborough Lions, who had Fiofaaki Lea sent off for a high tackle.

Sam Benjamin and Harry Glynn scored twice for the away side while Alex Wilcockson, Tom Aviss, Devon Constant and Ed Sumpter also crossed.

Lea’s dismissal came when the hosts were 31-22 behind and the division’s bottom club could only muster up one more score when Marius Andrijauskas crossed five minutes from time.