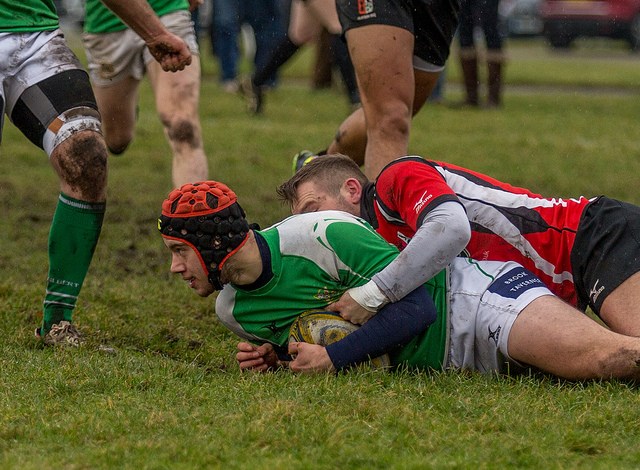 Wharfedale have moved four points clear of the relegation places in National Two North following a victory over rivals Blaydon.

Dale have now won three games on the spin which has seen them move off the foot of the table and into the safety positions, while Blaydon stay in the drop zone.

James Doherty’s men, along with Sheffield Tigers, were the only teams to win in the bottom half with the Tigers claiming a much needed victory over Macclesfield.

At the summit, Sale FC remain four points clear after another win over a promotion contender while Hinckley, Stourbridge and Chester also secured victories. Elsewhere, Sedgley Park’s match with Otley and Leicester Lions against Luctonians were both postponed.

The Manchester-based side started well and after Chris Johnson’s penalty, Matt Bradley dived over.

Sale extended their advantage through Jonty Rawcliffe’s superb individual score before Johnson’s second penalty of the afternoon made the score 20-0.

A score from Tom Ailes and a penalty try sealed victory, but Jake Rodgers and Guy Pike did claim consolation tries for the visitors.

Ricky Aley landed a penalty for South, before Sam Driver capitalised on a poor line-out to cross for the away side.

A James Martin try and a score from a penalty from Joe Wilson gave the Hornets a 17-3 half-time lead.

Winger Martin glided through a gap to extend Hinckley’s advantage after the break, but Myles Bean crashed over on 69 minutes to give South some hope.

But, late tries from James Squires and Mark Deauville secured a fine victory for George Chuter’s side.

Sam Pailor scored a hat-trick to help Stourbridge overcome Huddersfield at Lockwood Park to move up to third place in the National Two North standings.

Pailor’s first try of the afternoon put Stourbridge 7-3 up at the break, with Huddersfield replying through a Harry Davey penalty.

Pailor then grabbed his second score and Davey slotted a drop-goal in response.

The Stourbridge forward then completed his hat-trick before Dan Rundle ended any hopes of a Field comeback to seal the victory.

The hosts did have the final say on proceedings as Nick Sharpe crashed over, but it was merely a consolation for Gareth Lewis’ men.

Chester once again produced a solid home performance as a professional display helped them secure a win over Sheffield at Hare Lane.

The Sheffield defence was breached on two occasions in the first half as Tom Foden and Harry Craven crossed.

Sheffield also went over in the opening 40, but Chester extended their advantage after the break as Craven scored his second try of the afternoon.

And Chester were able to seal the bonus-point when Sam Farrar scooted over to wrap up an eighth home victory of the season.

Sheffield Tigers ended a run of nine straight defeats in National Two North with a narrow victory over Macclesfield at Dore Moor.

All of the points were scored in the first half as Will Bennett’s converted try was added to by Mark Ireland from the tee.

Macc failed to take any of the chances they created in the second period as the Tigers held on for a welcome triumph.

Having arrived at Crow Trees on the back of three wins from their last four games, Dale stormed into a 16-point lead at the break.

Thank you. And best of luck for the rest of the season. https://t.co/GufPbssXIG

A first half score from Tom Mann as well as penalty try and 13 points from the boot of Tom Barrett put Dale in firm control of this match.

Jack Beckwith’s score to add to Rob Lenderyou’s first half effort gave Blaydon renewed hope, before a powerful scrum allowed James Tyson to score and secure the points for Wharfedale.