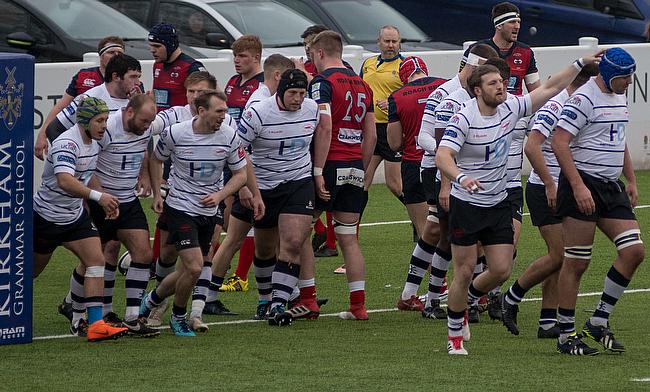 Hull Ionians failed to clock up their ninth consecutive victory as they were beaten by an impressive Preston Grasshoppers at Lightfoot Green.

The National Two North league leaders suffered their first loss since the middle of September and now the I’s are just five points clear of the chasing pack.

Second placed Chester were able to close the gap as they edged past fellow promotion rivals Huddersfield, but third placed Hinckley could not capitalise on Hull Ionians’ defeat after losing to Macclesfield in Cheshire.

Macc’s win over Hinckley means the Blues are now 10 points from safety and there was also a vital victory for Leicester Lions, who moved out of the relegation places after they beat Peterborough Lions.

City rivals South Leicester have now fallen into the drop zone after losing away at Sedgley Park while elsewhere in National Two North, Fylde’s good form continued against Wharfedale, Otley saw off Stourbridge and Tynedale made it three wins on the bounce when they visited Sheffield Tigers.

Hull Ionians’ eight-match winning streak came to a grinding halt as the league leaders were beaten by Preston Grasshoppers.

The hosts made a flying start, with James Gough and Rouban Birch both going over to give them an early 14-0 lead.

Fantastic win by the lads yesterday – moves Hoppers three places up the league. Thanks to @Ioniansrufc for a great match. pic.twitter.com/KTCT75gm4p

James Sanderson hit back for the I’s but further scores from Luke Proctor and Tyler Spencer, as well as penalty from Thomas Davidson, completed a brilliant first half for Preston.

Hull battled in the second period, but despite their best efforts to dominate the set-piece, the Hoppers were able to shut their visitors out and clinch their fourth consecutive home win.

Chester beat Huddersfield to tighten their grip on second spot in National Two North, despite Chris Johnson landing five penalties for the hosts.

Johnson nudged over three kicks to give Field and early lead, but hooker Alick Croft went over to reduce the deficit.

Huddersfield moved five points clear before half-time as Johnson was on target once again, but the visitors turned the game around after the interval.

David Ford and Thomas Foden both crossed before the hour to put the away side 21-12 in front and the hosts could only manage another kick from Johnson as Chester saw out the victory in Yorkshire.

Macclesfield produced arguably their best performance of the season as they picked up a superb win over promotion chasing Hinckley at Priory Park.

The visitors started well and were ahead after Joe Wilson’s try, but scores from Sam Parry (2) and Harry Blackwell gave Macc a 19-14 half-time lead.

Macc’s Head Coach Marshall Gadd speaks about the victory over Hinkley at the weekend and see the full interview and highlights on our Facebook or on Macc Rugby TV via the following link: https://t.co/UFS8aqWzoa #maccrugby pic.twitter.com/kvcZjd7C8Y

Gareth Turner had crossed for Hinckley’s second in the first period, but his side saw the game fall away from them after the break as three penalties from Tom Morton and Josh Redfern’s try sealed a crucial victory for the Blues.

Hinckley were awarded a late penalty try, but it was merely a consolation as their woes on the road continued.

Fylde claimed their fourth victory on the bounce thanks to a narrow win over Wharfedale at Woodlands.

Connor Wilkinson opened the scoring for the hosts, only after Rhys Lovegrove had given Wharfedale the lead.

However, Ben Vernon’s try and a penalty from Greg Smith put Fylde 17-10 up at the interval.

Ben Sowrey’s second half try for Wharfedale levelled things up, but another penalty from Smith proved enough for Fylde to seal another win, which leaves them seven points off the top two.

Sedgley Park powered their way to a welcome victory after running in six tries against South Leicester at Park Lane.

Tries from Danny Maher (2), Steve Collins, Jamie Harrison and Matt Riley inside the first 40 minutes ultimately won the game for Sedge, while Daniel Ireland responded for the visitors.

Thomas Coe’s try put the icing on the cake for the home side, but South rallied in the final quarter to salvage a bonus-point.

Ben Palmer, Rhoderick McNaughton and Thomas Cheney all crossed, but the damage had been done in the first period as Sedge secured a much-needed win.

Otley recorded their fifth win from their last six matches as they scored five tries to ease to a bonus-point victory against Stourbridge.

Cameron Burnhill’s double gave Otley the lead before tries from Stephen Nolson and Joe Rowntree put the hosts in control.

A penalty from Ben Smith and Paul Petchy’s effort in the second-half wrapped up the win for the Yorkshire club.

Jack Spencer and Dan Rundle went over after half-time for Stourbridge, but that was as good as it got for Neil Mitchell’s side.

Tynedale secured their third win on the spin after beating Sheffield Tigers at Dore Moor.

In a closely-fought encounter, it was the North-East side who came out on top, as Ben Woods’ men continued their excellent recent form.

A try from Matt Ouston was cancelled out by Tigers winger Henri Packard, but Rob Parker’s penalty on 76 minutes made sure of the win for the away side.

Leicester Lions have once again moved out of the bottom three in National Two North as they saw off Peterborough Lions in the Midlands.

Ben Spokes gave Leicester the perfect start to the second period as he grabbed the bonus-point score and his try ultimately sealed the win for the hosts, while Nico Deffo dotted down late on for Peterborough Lions.

The win for Leicester leaves them two points ahead of the drop zone while Peterborough Lions now find themselves 15 points adrift of safety.