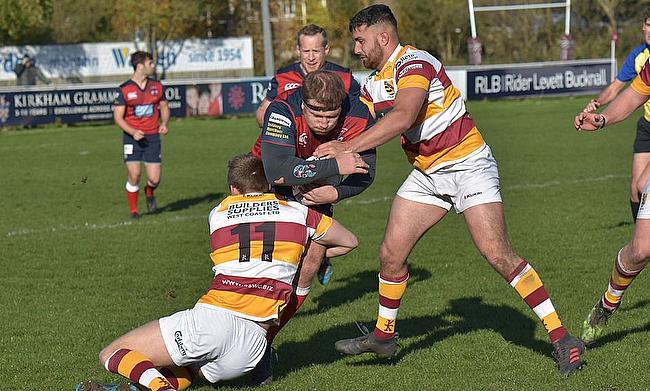 Over the last few weeks, there has been a lot of activity towards the summit of National Two North and this Saturday sees arguably the most significant weekend in this early promotion race.

The top four sides all face each other in Round 10 with league leaders Hull Ionians welcoming an in-form Huddersfield side to Brantingham Park while fourth placed Sedgley Park visit Hinckley, who currently occupy the bronze medal position.

Fifth placed Chester will also be watching on with interest when they travel to South Leicester while elsewhere, Stourbridge host Fylde and Wharfedale entertain Leicester Lions.

What a place to start the National Two North weekend. League leaders Hull Ionians take on second placed Huddersfield in a highly anticipated Yorkshire derby with both sides aiming to continue their fine form. The I’s come into this clash at Brantingham Park having won their last five matches and the side relegated from National One in April are currently doing everything right as they target an immediate return to the third tier.

Tomorrow, we welcome @Huddersfield_RU to Brantingham Park for a 2pm KO. Also we have a double header, @ioniansbuccs take on Huddersfield Falcons. Team news to follow….. pic.twitter.com/sTuOEgZF3V

Hull have also won their last 20 home matches at his level, but they arguably face their toughest test this weekend. Huddersfield arrive in East Riding in blistering form having won their last seven matches on the trot. Narrow losses to Sedgley Park and Otley at the beginning of the season seem a distant memory for Gareth Lewis’s side who now sit four points behind Hull ahead of this encounter. Field have conceded the second lowest amount of points this term, while Hull Ionians have scored the most, so expect fireworks between the top two sides this weekend.

Whilst the frontrunners do battle in Yorkshire this Saturday, the Midlands plays host to a contest between third placed Hinckley and fourth placed Sedgley Park. The hosts slipped out of the promotion places last Saturday as they were comfortably beaten by Huddersfield away from home. Director of Rugby George Chuter admitted his side were ‘below-par’ and they will know they must step up their game with rivals Sedgley Park visiting Leicester Road in Round 10.

Hinckley sit three points behind the top two while Sedge sit one point further back. Matt Bebbington’s side battled hard to clinch a home victory over Peterborough Lions last Saturday and even though it wasn’t a glowing performance, they were able to return to winning ways after losing narrowly to Tynedale in Round Eight. The men from Park Lane are now back on their travels and a first victory on the road since the end of September could see Sedge sneak into second place.

With the top four in action against one another and with a game in hand to come next weekend, Chester will be keen to keep themselves in the promotion picture when they visit South Leicester this Saturday. The men from Hare Lane put in an excellent performance to see off Stourbridge in Round Nine and the Cheshire outfit are now six points off second placed Huddersfield as we approach the third-way point of the campaign.

Chester will arrive in the Midlands in Round 10 favourites for victory because South Leicester come into this contest having lost their last four games. The men from Welford Road flew out of the blocks at the beginning of the season, but they have now won just one of their last seven matches which has seen them fall to 12th in the division. After a torrid October, can South begin November with a much-needed victory?

It was role reversal for Stourbridge last Saturday. After a storming display in the first half against South Leicester in Round Eight which helped them to back to back victories, it was the opening 40 minutes which cost them against Chester last weekend. Stour did battle back in the second period, but they slipped to a defeat in Cheshire and now they will regroup as they prepare to entertain Fylde.

Another tough away challenge for #Fylde as they travel on Sat to @StourbridgeRFC (3pm). 7th v 9th. The last game between the clubs at Stourton Park was in September 2011. pic.twitter.com/T0FT42uCzD

Neil Mitchell’s side are currently sixth in the table and 10 points off the top two and they welcome a Fylde team who fell into the bottom half of the division in Round Nine. The Lancashire outfit were relegated from National One back in April, but life at this level has not been straightforward for Warren Spragg’s men. Fylde come into this fixture with Stourbridge having won just one of their last five games so a welcome victory in the Midlands would be a perfect way to fire their season back into life.

Three wins from their last four matches means Wharfedale will be in a buoyant mood when they host Leicester Lions in Round 10. Last week, Dale put the Lions’ city rivals – South Leicester – to the sword as Rob Baldwin’s side maintained their positive recent form which has lifted them to seventh in table.

The Greens have also lost just once at the Avenue this term, but they maybe expecting a fired-up Leicester Lions side to arrive in Yorkshire on Saturday. Andy Key’s men would have been extremely frustrated in Round Nine after losing to a struggling Macclesfield side, especially after securing three wins on the spin. The Midlands club had a disappointing start to the campaign so the 13th placed side will be hoping to recover from last week’s defeat as swiftly as possible as they aim to increase the one-point gap between themselves and the relegation zone.

Last week, Otley – along with Stephen Nolson- turned on the style in the second half against Tynedale as the Yorkshire outfit secured back to back victories. Trailing at the interval, Charlie Maunder and Tom Casson’s men scored 27 unanswered points, including a hat-trick from Nolson, to clinch their fifth win of the campaign.

Otley sit in the top half of the table after their latest triumph while Peterborough Lions are currently rooted to the foot of the division. The Lions have won on one occasion so far this term, but since that victory over Chester at the start of October, Simon Moyle’s side have slipped to three successive losses. However, the men from Bretton Woods put in a very spirited display against promotion chasing Sedgley Park last weekend so they will be eager to carry those positives from that narrow defeat, into this home clash with Otley.

Narrow contests have been the story of Preston Grasshoppers’ return to National Two North and the Lancashire club found themselves on the right end of a close result in Round Nine. Paul Arnold’s side eventually edged past Sheffield Tigers to secure back to back wins at Lightfoot Green and the result also leaves the Hoppers 10th in the table and six points clear of the bottom three.

Currently sitting in the aforementioned relegation places are Tynedale who host Preston this weekend. Ben Woods’s side had no answer to Otley’s excellent second half display in Round Nine as they fell to another away defeat, but Tyne are back at Corbridge on Saturday and it is on their home turf where both of their wins this season have come. In fact, the North-East side have been victorious in their last two fixtures in front of their own supporters and with them sitting just one point from safety, Tyne could move out of the drop zone with a third home win on the bounce.

Sheffield Tigers end the first third of the campaign by hosting Macclesfield and the Yorkshire outfit will be keen to claim a victory in Round 10 this weekend. Jamie Broadley’s side were edged out by Preston Grasshoppers last Saturday meaning the men from Dore Moor have now lost their last four matches and sit just three points clear of the relegation places.

The Tigers’ solid start to the campaign has faded into the background, but they can reignite their season with a home victory against Macc, who currently occupy a spot in the bottom three. However, the Cheshire outfit will be in a more upbeat mood this weekend after clinching their second win of the season in Round Nine against Leicester Lions. Marshall Gadd’s men are now seven points from safety, but back to back victories could spark a revival from the Blues.