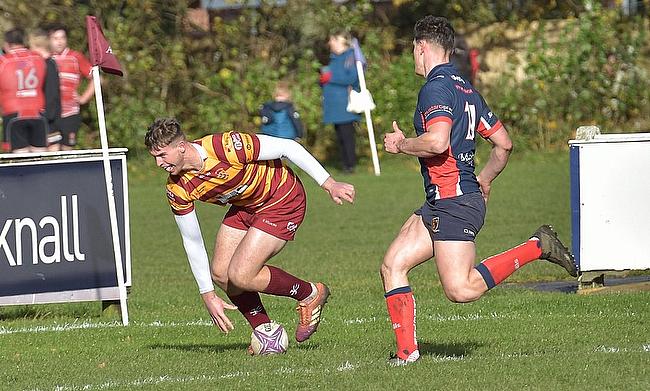 Fylde capitalised on the postponement of Caldy’s top of the table clash with Sedgley Park to move to the summit of National Two North. Photo Credit: (Chris Farrow)

Warren Spragg’s side defeated Chester at Woodlands as the Lancashire club maintained their unbeaten start to the season in Round Eight.

The men from Woodlands are now four points clear of Caldy, who they face this coming weekend at Paton Field.

Down at the bottom, Hinckley moved further away from the drop zone following a solid victory over Scunthorpe whilst a 3-3 draw for Hull against Luctonians was enough for Gary Pearce’s side to jump out of the relegation places.

Huddersfield have now slipped into the bottom three after they lost to Sheffield Tigers, who are up to fourth in the table, whilst Tynedale and Wharfedale shared the points at the Avenue.

Elsewhere, there were home wins for Preston Grasshoppers and Otley who defeated Stourbridge and Loughborough Students, respectively.

Two tries apiece for Connor Wilkinson and Greg Smith helped Fylde move to the top of National Two North as their unbeaten run continued against Chester.

Both of Wilkinson’s scores came in the first period as the hosts held a 25-10 lead at half-time, with tries also coming from Tom Roebuck and Smith.

Chester did rally after the restart as Tom Holloway’s second try, along with Shay Owen’s effort, reduced Fylde’s advantage to eight points.

However, the hosts were able to take the game away from Chester as the impressive Smith pinged over a penalty before converting his second try.

He then completed the afternoon by taking his personal tally to 22 points as he converted Tom Carleton’s score right at the death.

Sheffield Tigers have lifted themselves into fourth position in the table thanks to a bonus-point win over Huddersfield.

The visitors were 17-10 up at the break with Louis Townsend and Pete Swatkins going over, whilst Elliot Knight struck back for the hosts.

Following the interval, Will Wallace’s touchdown kept Huddersfield at bay and a second penalty of the afternoon from Mark Ireland extended the Tigers’ advantage.

Joel Hinchliffe scored with five minutes to go as Huddersfield looked to salvage something at Lockwood Park, but a third successive win for Sheffield Tigers was secured when Wallace grabbed his second try late on.

Wharfedale fought back to earn a draw against Tynedale in an entertaining contest at the Avenue.

This fixture was in doubt on Friday night due to the wet weather, but following a pitch inspection, the game went ahead.

[mpu-1]Dale led this encounter 17-13 at the interval thanks to tries from Harry Bullough and Jonathan Moore, and it got better for the away side after half-time.

Matt Speres’ converted score gave the visitors an 11-point lead, but Tynedale then mounted a fightback.

On 48 minutes, Liam Carmichael added to earlier penalties from Jake Rodgers and a penalty try to cut the lead to four points and Tyne then went ahead in Yorkshire when Will Haydon-Wood darted over.

However, Dale responded and a penalty on the hour from Jack Blakeney-Edwards proved to be the final points of the match as both sides shared the spoils.

Preston Grasshoppers returned to winning ways in National Two North thanks to a narrow victory over Stourbridge.

PJ Millea opened the scoring for the hosts before Scott Jordan and Luke Proctor went over to put Preston in control.

However, Stour hit back and did so in some style as Dan Rundle, Noah Heward and Afeafe Haisila all crossed to the level things up on 58 minutes.

The game looked like it was heading to a draw at Lightfoot Green, but the decisive moment of this contest came five minutes from time as Jake Squirrell kept his cool to slot over a match-winning penalty for Hoppers.

Tries from Simon Willet and Max Johnson, plus nine points from the boot of Ben Smith, ensured the Yorkshire outfit sealed successive triumphs on their own patch.

The Students were unable to conclude October with a fourth straight win, but did leave Otley with a bonus-point thanks to scores from Sam O’Leary-Blade and Emmanuel Iyogun.

Scunthorpe are still seeking their first win of the campaign as Hinckley produced a controlled display to clinch a victory at Heslam Park.

Joe Wilson, Ben Marshall, Tom Wheatcroft and Rory Vowels all claimed tries for the Hornets, who bounced back after a humbling defeat against Fylde in Round Seven.

Not sure I have ever been involved in a game as wet as yday @ScunthorpeRUFC but the desire of the @Hinckley_Rugby boys was awesome and a bp win well deserved. @RugbyHoppers will now be a great challenge next week #n2n @nca_rugby pic.twitter.com/eq9FQJuOXA

Scunthorpe No.8 Ben Hyde crossed in the first-half for the hosts while Jacob Hardy scored a similar close-ranged try in the second period.

Hinckley are now four points clear of the drop zone, with bottom of the table Scunthorpe sitting nine points adrift of safety.

Hull and Luctonians battled to a try-less draw in Yorkshire, but the hosts were able to move out of the relegation places following this stalemate.

Ollie Allsopp’s penalty broke the deadlock for the visitors just after the hour, but two minutes later Hull. were back on level terms through Simon Humberstone.

Both sides lacked a cutting edge in tough weather conditions and it is a result which probably doesn’t suit either side.