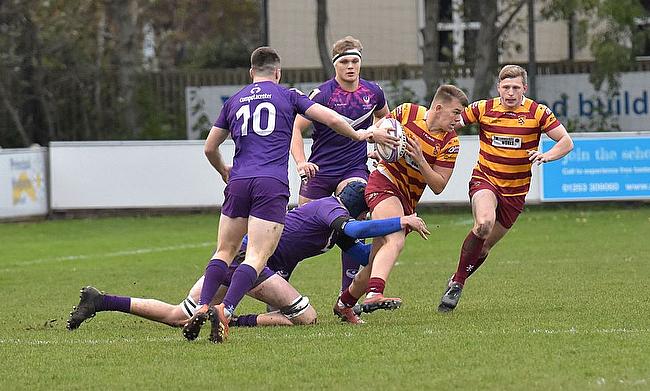 Fylde are still leading the way in National Two North following an impressive win over Loughborough Students in Round 10. Photo Credit: (Chris Farrow)

After seeing their unbeaten run come to an end against promotion rivals Caldy, Warren Spragg’s side bounced back superbly to swat aside Loughborough at Woodlands.

The Lancashire club remain one point clear of Caldy, who comfortably beat Scunthorpe on an emotional day in Lincolnshire.

Gareth Davies’ side do also have a game in hand to come against third-placed Sedgley Park, who battled past Luctonians on Saturday.

Tynedale are up to fourth after a last-gasp win over Sheffield Tigers whilst Huddersfield also came out on top in a pulsating clash with Stourbridge.

Fylde outclassed Loughborough Students at Woodlands to maintain their one-point lead at the summit of National Two North.

Loughborough, who had dented Sedgley Park’s possible promotion hopes at the beginning of the month, couldn’t replicate their performance in Lancashire as the league leaders ran in five tries.

#Fylde retained top spot in #N2N with a 33-7 victory over @LboroRugby at the Woodlands. @spraggio “I thought we were outstanding in the first 15 minutes and some of the ball movement and speed of support was the best we have produced so far this season.” https://t.co/x2zYFXzDLQ pic.twitter.com/XyEpivTnSB

Tom Grimes, Connor Wilkinson and David Fairbrother crossed in the first half, with further scores from Adam Lewis and Tom Roebuck.

The Students’ only breakthrough during the afternoon came 11 minutes from time as Will Brown darted over, but Fylde proved too strong for Loughborough.

Caldy kept the pressure on Fylde as they cruised to victory against Scunthorpe on a day when both teams remembered James Walker.

The Scunthorpe 1st XV player sadly passed away at the start of November and this was the Greens’ first match following the tragic news.

In terms of the rugby itself, Ben Jones and Nick Royle shone for Caldy as both players shared seven tries between them with the former scoring four.

Caldy have now won all nine of their fixtures this season and they do have a game in hand over leaders Fylde to come.

Sedgley Park staved off a battling Luctonians to return to winning ways in National Two North.

The hosts seemed to be cruising after the first quarter as they led 21-3 thanks to tries from James Harper, Jamie Harrison and Tom Ailes.

Both teams then exchanged scores as efforts from Lucts’ Oliver Allsopp and Aiden Cheshire were cancelled out by Tom Coe and Ollie Glasse, but the visitors were able to launch themselves back into the contest.

Rob Crowley and Frank Kelly both dotted down after the hour to cut Sedge’s lead to six points heading into the final 10 minutes.

However, that margin remained the same for the rest of the game as Callum McShane’s try was matched by Connor Deignan as Sedge held out for the win whilst Luctonians secured a valuable two points from their trip to Manchester.

Tynedale stretched their unbeaten to run five matches and did so in stunning style against Sheffield Tigers thanks to a dramatic late try from Ethan Clarke.

Tyne, who haven’t tasted defeat for over a month, appeared to be slipping to their third home loss of the campaign when they trailed 18-12 with two minutes left.

Tries from Jack Redfern-Brown and Jamie Broadley, plus eight points from the boot of Mark Ireland, had put the Tigers on course for their fifth straight win but they were to be denied.

Jonathan Burden and Michael Hughes had dotted down for Tyne and their third try of the afternoon proved decisive as Clarke powered over to snatch the victory for Ben Woods’ side.

Huddersfield clinched a late victory over Stourbridge to lift them three points clear of the relegation places after a pulsating contest.

Kian Stewart’s try four minutes from the end proved to be enough for Field despite Stour being awarded a penalty try in the last act of the game.

The hosts had led 17-10 at the break with Joel Hinchliffe, Nick Sharpe and Liam Stapley all crossing, whilst Tatenda Mukarati responded for Stour.

It was first blood to Field after the restart as Richard Piper powered over but two Stourbridge tries from Afeafe Haisila and Jack Lea – either side of a home penalty from Will Milner – saw the Midlands club move to within three points of their hosts.

Otley recorded their third win on the spin as they eventually saw off the challenge of Hull at Cross Green.

In truth, the game could have gone either way up until the 75th minute when Ben Steele’s try was enough to see Otley home.

The hosts led 13-10 following Paul Petchey’s try and eight points from the boot of Ben Smith, whilst Keane Naylor had gone over for Hull.

Josh Hall’s effort kept Otley in control, but penalties number two and three of the afternoon from Simon Humberstone kept Hull in touch.

But, replacement Steele barged over to clinch another victory for Otley whilst Hull did come away from this all Yorkshire affair with a bonus-point thanks to Mike Adlard’s late converted try.

Wharfedale showed their ruthless touch and took their chances as they beat Hinckley in an entertaining contest at the Avenue.

The Greens were going in search of their first home win for just over a month and the Yorkshire outfit displayed a clinical edge which allowed them to battle past Hinckley.

The host scored first-half tries through Rian Hamilton (2) and Harry Bullough to carry a 19-7 advantage into the second period.

Hinckley’s Joe Wilson added to Oliver Povoas’ earlier score to reduce the deficit, but the in-form Matt Speres crossed to keep Dale ahead.

And it was a lead the home side wouldn’t relinquish in the final 11 minutes whilst Hinckley left Yorkshire with a losing bonus-point following Sam Greening’s try.

Winger Will Du Randt helped Chester return to winning ways as they picked up their first victory since the start of October against Preston Grasshoppers.

The Cheshire club’s last triumph occurred just over a month ago, but the men from Hare Lane were able to halt a three-game losing streak with Du Randt crossing on two occasions.