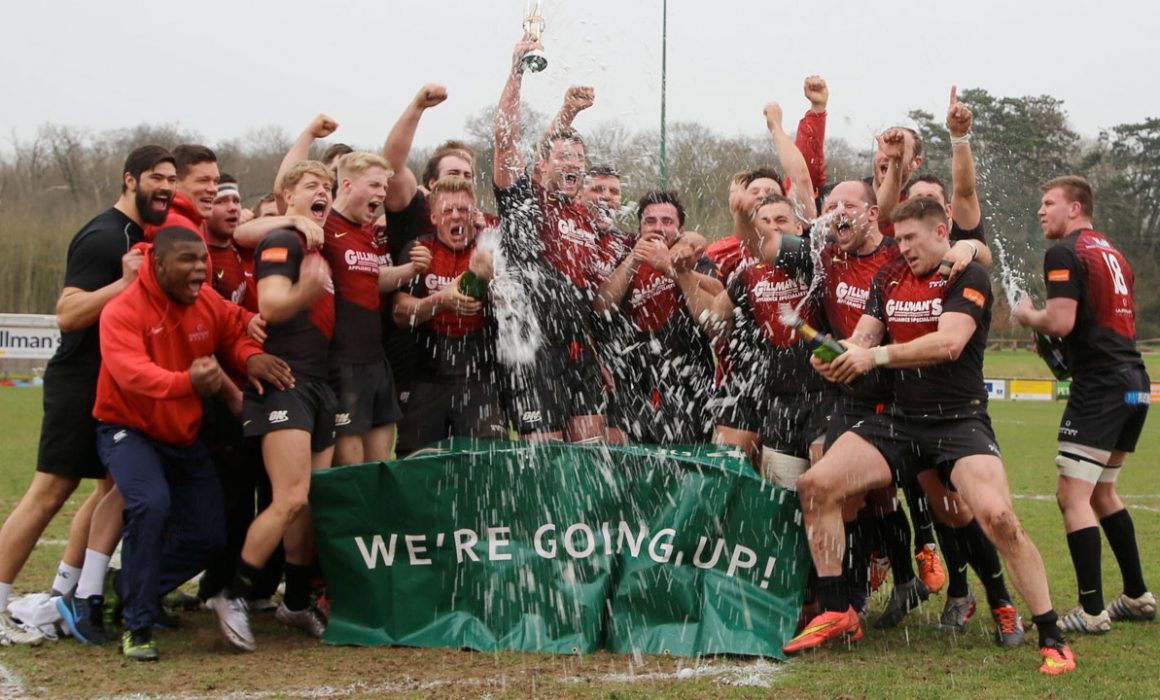 TRU’s Chris Heal reflects on yet another intriguing weekend in the National Leagues which saw titles lifted, campaigns reignite and revivals continue.

Well, we knew it was coming. In National One, Hartpury College have been an unstoppable force this season and a stunning 25th consecutive win of the season finally saw John Barnes’ side win the National One title and earn promotion to the Championship.

It wasn’t a straightforward afternoon for the runaway champions on Saturday, but considering Hartpury were established in the rugby pyramid in 2004, the progress they have made to reach the second tier of English rugby is mind-blowing.

Added to that, the fact that College have missed out on just two bonus points this term and racked up 1214 points scored is an outstanding achievement. Now, Barnes and his side will be looking to become invincible and go the rest of the season undefeated.

Down at the bottom of National One, Macclesfield may well have handed themselves the smallest of lifelines after securing their first victory in 15 matches while Hull Ionians came from behind to draw with relegation rivals Blaydon.

In National Two North, Sheffield Tigers have also given themselves hope after a convincing win over fellow strugglers Preston Grasshoppers while at the top of the division, Caldy and Sale FC continue to make no mistake.

The can be said for Bishop’s Stortford, Chinnor and Old Elthamians at the summit of National Two South, but the relegation battle in this league continues to intensify.

Bottom of the table Exmouth were unable to close the gap on their rivals as they slipped to a home defeat while Barnes, London Irish Wild Geese and Barnstaple all suffered losses. The winners from this weekend in National Two South were once again Worthing Raiders as a third victory in four matches has lifted them four points clear of danger with five games of the season remaining.

Hartpury College beat Old Albanian 57-21 to clinch the National One title and earn promotion to the Championship just 13 seasons after the formation of the club.

College, who knew just two points would see them become champions, blew away Old Albanian in a dominant first half as they led 38-14 thanks to a hat-trick from Gloucester’s Mat Protheroe as well as scores from George Boulton, Joe Batley, Jake Polledri.

Matt Miles and James Pritchard crossed for the OAs before the break and the visitors started on the front foot in the second period as Zak Vinnicombe went over.

Momentum then shifted in the favour of James Shanahan’s side as Will Tanner, Rhys Oakley and Polledri were all yellow-carded for Hartpury.

Down to 12-men and with the title at stake, College proved just why they are worthy champions as a superb defensive effort stopped the OAs getting back into the contest.

Instead, the champions increased their advantage as a superb second try from Batley was followed up with scores by Jonas Mikalcius and Mike Wilcox to put the icing on the cake and spark scenes of elation.

Director of Rugby John Barnes told Gloucestershire Live: “It’s been an outstanding year. It’s great for everyone who’s been involved with Hartpury over the years to finally achieve Championship rugby.

“At the end of the day we know it’s going to be a massive challenge on the field. We’ve put a few things in place trying to prepare for that. It’s something we’ve got to step up to and certain areas of our game have to improve in the Championship and it will be a tough year but we’re looking forward to it.”

With the title now confirmed as Hartpury’s there is the small matter of relegation to be decided from the third tier of English rugby and in Round 25, the drama at the foot of the table continued.

Bottom of the league Macclesfield picked up only their third win of the season as they edged out Loughborough Students 42-38.

Nick Allsop opened the scoring for Macc while Tom Eaton went over the crucial try late on to snatch a much needed victory for Giles Heagerty’s side.

Mike Finnemore, Sam Moss and Ryan Parkinson were also among the Macclesfield scorers.

A brace from Jordan Olowofela as well as tries from Max Berry, Jack Moates, Jack Kerr and Victor Keunen made up the scorers for Loughborough who have now lost their last six while this triumph for Macclesfield leaves them 17 points of safety with five games left to play.

The battle above Macclesfield remains as tight as it did before the beginning of Round 25 as Hull Ionians drew 17-17 with Blaydon at Brantingham Park.

Hull Ionians were two points adrift of safety at the beginning of play and that gap is still the same after a spirited fightback by the hosts.

An early try from Dan Marshall and a score by Nathan Horsfall following a sustained period of pressure helped Blaydon into a 17-0 half-time lead.

Ionians knew they need to open the scoring in the second period and they did just that as Andy Humberstone powered over in the corner.

The game was ticking towards its conclusion but Sam Wilson’s try made it 17-10 before Hull completed the comeback. Callum Irvine dived under the posts and Humberstone slotted over their first extras of the match to snatch a share of the points.

Elsewhere in National One in Round 25, Plymouth Albion’s grip on second place has been tightened after their excellent 47-26 away win at Birmingham Moseley but also because Ampthill and District were beaten 29-19 at Butts Park Arena by Coventry.

Fifth placed Rosslyn Park were in action against at Esher on Friday night and the it was the visitors who continued their good form as they secured 24-18 victory at Moseley Road.

Other results in National One saw Blackheath end a five game winless run as they beat Darlington Mowden Park 26-21 while Cambridge also put a halt to their wretched recent form by clinching a crucial 46-28 win away at Fylde.

Sheffield Tigers notched up their sixth National Two North win of the season as they hammered relegation rivals Preston Grasshoppers 30-0 at Dore More.

Jamie Broadley’s try and eight points from the boot of Mark Ireland got Sheffield on the way in the first half.

Peter Swatkins and Broadley again went over after the break, while Ireland took his tally to 15 points for the afternoon as the Tigers eased to a crucial victory.

This defeat for Preston now leaves them 11 points adrift of safety with five games of the season remaining while the four-point win for the Tigers means they are nine points behind 13th placed Harrogate.

‘Gate had the chance to pull away from the bottom three this weekend, but they were comfortably beaten 40-10 by third placed Sedgley Park at Rudding Lane.

The prolific Jonny Matthews grabbed a brace along with Andy Riley while Sam Lowthion and Sam Peet also crossed for Dean Schofield’s side.

The other side embroiled in the relegation battle are Scunthorpe, but they slipped to their sixth defeat in a row as they were beaten 25-10 away at Tynedale. The loss keeps the Greens seven points behind Harrogate.

At the right end of the division, league leaders Caldy secured their 17th win in a row and a place in the top two this season thanks to a hard-fought 29-23 victory away at Stourbridge.

Their lead at the top remains 11 points as Sale FC secured their ninth victory on the bounce as they emphatically beat Wharfedale 63-27. Paolo Odogwu claimed a brace on his debut while Ciaran Connolly and Jack Moorhouse grabbed two scores apiece in nine-try rout at Heywood Road.

Elsewhere in National Two North, Chester’s six game unbeaten run was ended in the Midlands as Leicester Lions sealed a 24-19 win over the men from Hare Lane. Near neighbours South Leicester made it three wins on the spin as they beat rivals Hinckley 25-12 while Luctonians took another huge step away from the danger zone as they secured back to backs wins thanks to a 30-21 victory over Otley.

Worthing Raiders continued to distance themselves from the relegation battle in National Two South after a narrow win over rivals London Irish Wild Geese at Hazlewood.

Ben Loosmore, Kariym Iriving, Kiba Richards, Jon Whittall and Harry Forrest all notched up tries in the first-half as Matt McLean impressed for Worthing at fly-half.

Liam Perkins and a penalty from McLean was all the Raiders could add to their 31-14 half-time lead.

Wild Geese battled hard to reduce the arrears as much as possible, but despite three scores in the second period, they could only manage to secure two bonus-points which keeps them in the bottom three while Worthing are now four points clear of the drop.

Wild Geese can certainly look at those two points as a positive considering the fact that fellow relegation rivals Barnes and Barnstaple also lost.

Barnes were beaten 43-31 at home to Bury St Edmunds with Glyn Hughes being the standout performer for Bury as the former London Welsh player kicked 23 points on the way to a vital victory for Gavin Hogg’s side.

It was a much more dramatic affair for Barnstaple who saw their first every away victory at this level snatched away from them in the last minute against Taunton Titans. Gary Kingdom landed a late penalty to steal a win for the hosts who had lost their previous two matches.

Despite the high drama at Hyde Park, there was a serious injury to Barnstaple’s Ben Hilton which caused the game to be stopped for over an hour on Saturday afternoon. Everyone here at TRU wishes Ben well and hopes he can make a speedy recovery.

From the bottom of the table, to the top where there was no mistakes made by the promotion and title chasing pack. League leaders Bishop’s Stortford were made to work hard for their 38-28 victory away victory over a valiant Henley Hawks side, but yet another bonus-point win keeps them five points clear at the top.

Second placed Chinnor secured their eighth win in a row as they comfortably beat Canterbury 47-19, but there was no bonus-point for Old Elthamians as they came away from Redingensians with a 20-7 win. Tries from Alex Brown and Ollie Claxon had put the OEs in brilliant position to claim their 18th bonus-point of the campaign, but Gavin Lach’s side could only manage one more score after the break which means they are now six points outside the top two.

Elsewhere in National Two South, fourth placed Redruth eased to a 26-7 win against Clifton while bottom of the table Exmouth are now 13 points from safety after a 36-12 loss at home to Cinderford.