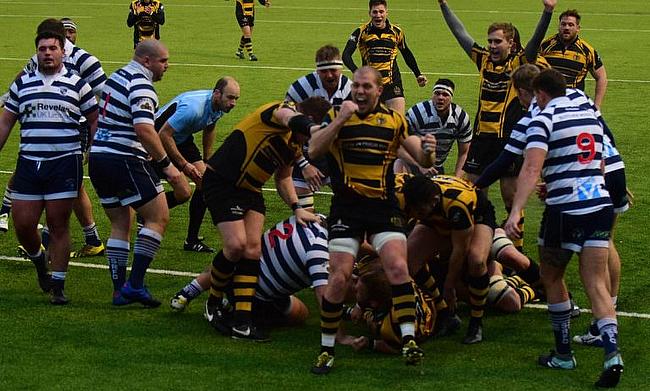 Hinckley remain on top of National Two North as they maintained their winning start to the campaign with a fifth straight victory.

George Chuter’s side beat Stourbridge on their travels and they are now three points clear at the summit at the beginning of October.

Sedgley Park are up to second after thrashing Macclesfield at home while Hull Ionians defeated Wharfedale in an all-Yorkshire affair to go third.

Also, in National Two North, there was a thriller at Cross Green as Otley completed a remarkable fightback to beat Preston Grasshoppers while Chester v Tynedale was postponed.

The league leaders were actually behind at the interval as a brace from Jack Lea helped Stour into a 14-7 interval lead, but a 48th minute try from Sam Driver levelled the game up.

Hinckley skipper Alex Salt had scored in the first period and his side took control of this contest in the second half as Joe Wilson, James Dickinson and Ryan Hough all crossed to make the game safe.

A Nigel Mukarati try and a penalty from Rickie Aley did give Stour a sniff of victory, but in the end, they fell to a defeat against their Midlands counterparts.

Macclesfield were blown away by a scintillating performance from Sedgley Park as Jamie Harrison starred for the hosts at Park Lane.

Macc, who are still without a win, scored through Dan Matthews and Sam Broster, but they were simply outclassed by Sedge, who have moved up to second in the table after this latest victory.

Hull Ionians bounced back from last week’s defeat against Hinckley as they beat Wharfedale at Brantingham Park.

The I’s have a wonderful record on their own patch in this division and they extended their winning run to 18 matches after this victory over Dale.

The hosts were behind at half-time as Lewis Minikin’s penalty was cancelled out by Rian Hamilton’s try.

Toni Kuku crossed for Hull’s first try on the hour, but Dale were able to move in front again as Hamilton grabbed his second.

However, Minikin was able to guide the home side to victory as he converted his own try and landed a penalty in the final 13 minutes.

Sheffield Tigers concluded the opening month of the season with a victory as they fought back to beat Fylde in a riveting contest.

A try from Harlan Corrie just after the hour put Fylde 24-16 in front, but the deadly boot of Mark Ireland steered the Tigers to a win at Woodlands.

The fly-half slotted three consecutive penalties to snatch the victory for Sheffield as he finished with an individual points haul of 20.

Henri Packard crossed for the away side in the second half, while Fylde’s other tries came via Connor Wilkinson, David Fairbrother and Greg Smith.

South Leicester returned to winning ways in Round Five with a thrilling victory against Peterborough Lions.

The hosts dominated the first half as tries from Timo Koster, Will Cave, Mitchelle Stephenson and Martin Wolfenden gave them a 29-12 lead.

Ben Young and Will Nankivell both crossed for Peterborough Lions in the opening 40 and it was first blood to the newly promoted side in the second half as Jonathan Hill dotted down to reduce the deficit to 12 points.

The visitors cut South’s advantage further as Alex Ioannou went over, but Myles Bean’s score on 72 minutes ultimately sealed the win for the Midlands side.

Allen Carr did cross late on to secure the Lions two bonus-points in an encouraging display from the visitors, but they go into October still searching for their first victory.

The Yorkshire side led 10-3 at half-time and despite failing behind in the second period, Field bounced back to seal the win which lifts them into the top half of National Two North.

A penalty try plus a converted score from Nick Sharpe and a Will Milner penalty made up Huddersfield’s points.

Laurence Warren-West and Devon Constant touched down for Leicester Lions who remain without a victory this season.

Otley overcame an 18-point deficit to pull off a sensational comeback against Preston Grasshoppers in a remarkable National Two North encounter.

A last-gasp penalty try secured the victory for Otley while Oli Goss, Paul Petchy and Ben Magee also crossed for the home side.

This was once again another narrow and frustrating loss for Preston, who had led 25-7 just after half-time following tries from Luke Proctor, Paul Millea, Oliver Trippier and Connor Trueman.

However, for the third week in a row, the Hoppers slipped to an unlikely defeat while Otley have now won three of their last four matches.