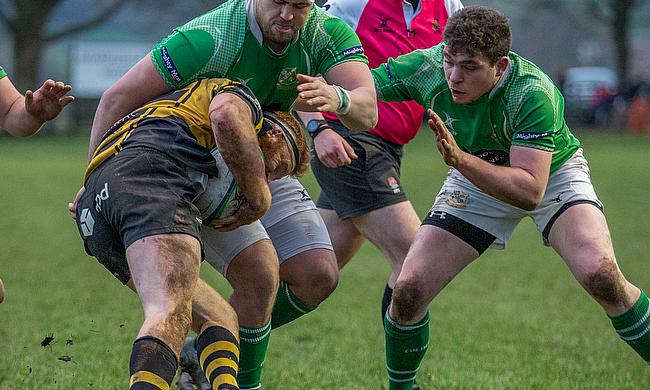 Hinckley will be targeting another away victory in National Two North ahead of Saturday’s fixture with league leaders Hull Ionians.

In Round 17, the Hornets secured their first win on the road since September and in turn, they are now only six points off the top two heading into this weekend.

However, they face a Hull Ionians’ side that have won their last 24 home matches at this level and the table toppers will be keen to maintain their control at the summit of this division.

After losing to Leicester Lions, second placed Chester will be aiming to respond in Round 18 when they host Sheffield Tigers while promotion rivals Fylde face the aforementioned Leicester and Huddersfield take on Macclesfield.

Macc are one of the sides currently in the bottom three along with Peterborough Lions and South Leicester. The Lions are 20 points from safety so a victory against Stourbridge this weekend could be a necessity while South Leicester will be searching for successive wins when they host Tynedale.

It was far from straightforward for Hull Ionians last weekend, but the league leaders got the job done against Peterborough Lions as they began 2019 with a win. After an indifferent December, the I’s would have been pleased to kick-off the New Year with a victory and even happier to see title rivals Chester fall to a defeat in Round 17.

Hinckley won away from home for the 1st time since Sept. in @wharfedalerufc – @callum_dacey5 scored 2, Skerritt, a penalty try and @Joeglover9 (his 50th since his return to the club) completed the tries, whilst @_alex_branson made his 50th appearance for the 1st XV. pic.twitter.com/y1JzhbWBRW

Their loss to Leicester Lions means Hull Ionians now sit six points clear at the summit, but the table toppers will be tested this weekend when they take on a fellow promotion candidate. Hinckley are the visitors to Brantingham Park and George Chuter’s side picked up a rare away win last Saturday. The Hornets beat Wharfedale 33-20 and it means they are now just six points off second place heading into this fixture. Hull have won all nine of their home matches this term, but if Hinckley were to clinch back to back victories for the first time since September, then it would certainly enhance their top two ambitions.

Chester’s promotion bid suffered a slight setback in Round 17 as Jan van Deventer’s side lost to Leicester Lions in the Midlands. Successive away defeats for the Cheshire outfit means they are now six points off top spot, but more importantly, the second placed side are now just three points clear of the chasing pack.

This Saturday, the men from Hare Lane will be pleased to be back on their own patch as they have lost only once at home all term so this will not be an easy task for Sheffield Tigers in Round 18. Jamie Broadley’s side will be extremely frustrated with how things have gone for them over the last month. In three of their last four matches, they have held solid leads but the Tigers have been unable to convert their advantages into victories. Defeats against Peterborough Lions, Stourbridge and South Leicester will have been tough take, but on the flip side, the Yorkshire outfit have definitely showed their qualities in those games and they will be hoping they end up on the right side of the result this weekend.

Last Saturday, Fylde extended their unbeaten run to eight matches as they battled to a victory over Macclesfield at Priory Park. Warren Spragg’s men are the form side in the division and the Lancashire club are now firmly in the promotion picture as they sit just three points behind second placed Chester.

Fylde have really clicked into gear over the last two months and they will be hoping their momentum continues when they host Leicester Lions this weekend. Like the home side, the Lions are also going through a good spell. Andy Key’s men have won four of their last five matches and after sitting in the bottom three, the Midlands club are now 10th in the table and 10 points clear of danger. Their impressive victory over Chester last weekend highlighted what the Lions are capable of and they will be eyeing the possibility of upsetting another promotion candidate in Round 18.

Also in this contest, keep an eye out for two of the in-form full backs in the division when Fylde’s Tom Carleton comes up against the Lions’ Alex Wilcockson.

After a run of one win in six games, Huddersfield’s superb start to the season had hit a rocky patch, but Gareth Lewis’ side have picked themselves up and responded in fine fashion. A draw with rivals Fylde has been followed by hard-fought wins against Otley and Preston Grasshoppers which means Field are now seven points off the top two, but they do have a game in hand.

The men from Lockwood Park sit in fifth place and their promotion challenge is in their own hands so they will be looking to stay in control of their fate when they host Macclesfield this Saturday. Macc come into this clash having put in a very encouraging display against Fylde in Round 17, but they were narrowly beaten in Cheshire. The defeat means Marshall Gadd’s men are now 14 points from safety so there is still a lot of work for the Blues to do despite their upturn in performances. Macc lost 26-15 to Huddersfield back in September so can they gain their revenge this time around?

Otley’s excellent first half of the season continued into 2019. The Yorkshire club are enjoying their most successful campaign for a number of years and their victory over Sedgley Park in Round 17 maintained the feel-good factor around Cross Green. Charlie Maunder and Tom Casson’s side have won eight of their last 10 games which leaves them in sixth place and nine points off the play-off place.

While Otley are flying, Wharfedale seem to be falling. The Greens were disappointed with their display against Hinckley last week and they have now lost five of their last six games. Dale are now one place above the relegation spots so heading into this all Yorkshire affair, the points will mean more to Wharfedale than the bragging rights if they were to secure a victory this weekend.

Following their defeat to Otley last Saturday, Sedgley Park may have felt ‘unlucky’ on the bus back from Cross Green.  A late penalty from Joe Rowntree saw Sedge miss out on a winning start to 2019 and their indifferent run of form also continued. Last year’s play-off runners-up have now won just two of their last eight games and the seventh placed side will be keen to improve on this sequence of results when they host Preston Grasshoppers this weekend.

Paul Arnold’s men arrive at Park Lane on the back off a home loss against Huddersfield, but spirits amongst the Hoppers must still be high. After an immediate promotion from Premier North, the Lancashire club had a brilliant first half of the campaign and they currently sit eighth in the table. The only negative for Preston thus far is their away form as they have picked up just one win on the road all term, but if they could add to that tally on Saturday, they would leapfrog Sedge in the standings.

Successive defeats against Wharfedale and Hull Ionians was not the way Tynedale would have wanted to end 2018 so Ben Woods’ side came up with the perfect response to kick-off January. The North-East outfit produced an excellent performance to defeat Stourbridge last weekend to get their season back on track.

Tyne currently occupy ninth spot in the table thanks to four wins from their last six games so confidence will be high when they take on South Leicester this weekend. However, the hosts will also be in an upbeat mood heading into Round 18 as they began the New Year with a vital victory. South came from behind to beat Sheffield Tigers and their win in Yorkshire halted a run of four consecutive defeats. The Midlands club are now eight points of safety and if they were to secure a victory at Welford Road this weekend, it would certainly strengthen their survival challenge.

Stourbridge suffered their seventh defeat in nine games last weekend as they lost out to Tynedale at Corbridge. Their difficult season continued on the opening Saturday in January and the Midlands club are now 11th in the table and 10 points clear of the relegation places.

Neil Mitchell’s side will now be hoping to return to winning ways when they host the division’s bottom side this week, but Peterborough Lions won’t roll over easily. The men from Bretton Woods put up an excellent fight against league leaders Hull Ionians last week and it continued their recent encouraging performances which has generated 11 points from their last five games. However, the Lions are 20 points from safety with a game in hand, so they will be keen to turn their positive displays into more victories as soon as possible.