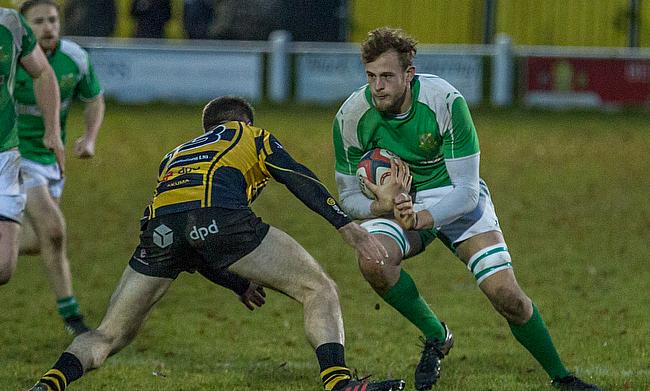 Hinckley moved two points clear at the top of National Two North following a tight victory over Wharfedale in a weather-affected weekend.

The Midlands club battled past a spirited Dale outfit to stay at the summit of the division while Sale FC’s win over Blaydon means they are up to second in the table following the postponement of Tynedale’s clash with Stourbridge due to the wintery conditions that hit the country.

Elsewhere, South Leicester and Huddersfield secured narrow victories while Sheffield picked up a vital win away at Otley.

Sedgley Park v Leicester Lions and Macclesfield v Luctonians were also called off due to the weather.

Hinckley recorded their eighth straight victory, but the league leaders were made to work for their latest win against bottom of the table Wharfedale.

Sam Driver scored a first half hat-trick for Hinckley as they showed a clinical edge to lead 15-0 at the break.

Once again we have heartbreak at the death for @wharfedalerufc
We will take huge heart from a huge performance
Thank you @Hinckley_Rugby , a great club to visit. Good luck for the season

Dale got on the board 15 minutes into the second period as they were awarded a penalty try and that seemed to spark the visitors into life as Phil Woodhead smashed his way over to score.

Tom Barrett then nudged over a drop goal to put Dale in front for the first time in the contest, but Hinckley came back as they pounced on a sliced clearance which resulted in Mitchell Lamb snatching the win for the hosts.

Sale FC moved up to second in the National Two North standings as they outclassed Blaydon in an eight-try rout to record a comprehensive victory.

Blaydon’s tries came via Ryan Foreman and Keith Laughlin, but they failed to build on their win over Sheffield Tigers in Round 13.

South Leicester came from behind to beat Chester in a thrilling contest at Welford Road.

James Preston’s try helped put the visitors 7-0 ahead but South responded with a converted try of their own.

Kyle Joseph’s try and James Robbins’ penalty gave Chester a 17-7 lead at the break, but a second converted try for South brought them right back into the contest.

Robbins’ second penalty gave Chester a six-point cushion before South went over late on and Rickie Aley added the vital extras to clinch the win for the Midlands side.

Huddersfield stretched their winning streak to five matches as Richie Piper once again scored a late try to complete a superb comeback against Sheffield Tigers.

Piper came up with the decisive score last weekend against Sedgley Park and he delivered with four minutes to go at Dore Moor to snatch the win for Field.

The Tigers scored through Thomas Coates, Gregg Mellor, Jamie Broadley and Henri Packard in an excellent first half from the hosts.

Adam Malthouse and Austen Thompson crossed for Huddersfield before the break, while Nick Sharpe’s brace and Piper’s late try clinched the game for the visitors, despite Mellor’s second score.

Steve Depledge kicked 10 points as Sheffield beat Otley to move to within two points of safety in National Two North.

A tight first half saw the visitors open up a 13-5 advantage thanks to two penalties from Depledge and a conversion following Sean Casey’s try while Max Johnson replied for Otley.

Former Otley player Depledge ultimately put the seal on the win after the break when he converted a penalty try as Sheffield secured their second win on the spin.