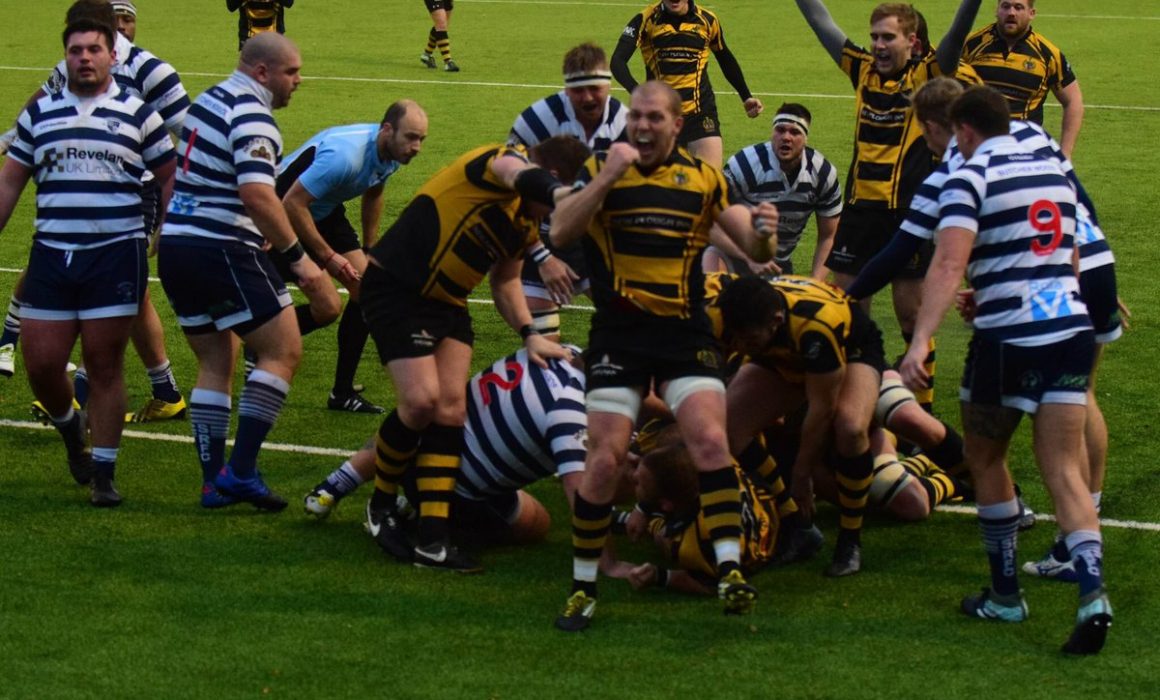 Hinckley eventually eased past Stourbridge in Round 13 to stay at the summit of National Two North.

George Chuter’s men have now won their last seven matches thanks to an excellent final quarter against Stour, who are now winless in four.

Hinckley remain level on points with second placed Tynedale as they battled to victory over a spirted Luctonians outfit while Sale FC are up to third in the division following a comprehensive win against Chester.

Sedgley Park lost ground with the frontrunners as a masterclass from Harry Davey helped Huddersfield to a victory over Matthew Bebbington’s side.

At the wrong end of the table, Wharfedale secured their second win of the campaign as they edged out South Leicester while a late try for Sheffield clinched victory against Leicester Lions.

Hinckley remained on top of National Two North thanks to a brilliant final 20 minutes against promotion rivals Stourbridge.

The visitors were 7-0 up at half-time following a try from captain Alex Salt, but they had to wait until the final quarter of this match to make sure their seventh straight win was secured.

Ben Marshall’s try on 65 minutes opened the floodgates before Sam Driver and a brace from Callum Dacey sealed the victory for George Chuter’s men.

Tynedale are still level on points with league leaders Hinckley due to a narrow win in a pulsating game at Luctonians’ Mortimer Park.

A score from David Cook and tries by David Batty and Nicolas Cairns helped Tyne to a 21-17 half-time lead, with Guy Kirby and Sam Boxhall keeping the Lucts in the game.

Frank Kelly and Joe White both touched down and a penalty try put Ryan Watkins’ side in front with a few minutes remaining, but Cairns’ late effort stole the victory for Tyne.

Sale FC continued their superb recent form with a bonus-point win over Chester.

The away side led 14-3 at half-time as Chris Mayor and Dan Birch went over while former Sale captain Liam McGovern landed a penalty for Chester.

But the visitors impressed after the interval as Mark Lawrence, Chris Owen and Andy Hughes all crossed for second-half scores.

Sale were also awarded a penalty try while Chester could only muster up a converted Kyle Joseph score as Jonathan Keep’s side made it six wins on the bounce.

Sedge scored three tries the first period through Dan Maher (2) and Jamie Harrison, but they still trailed at the break as Davey converted his own try and landed four penalties to edge his side ahead.

The impressive 18 year-old added to Field’s lead with another penalty after half-time, but a drop-goal and a penalty from Steve Collins as well as a score from Andy Riley put Sedge in front.

However, Davey was to be instrumental in Huddersfield wrestling the game back as his sixth penalty of the afternoon and conversion of Piper’s score clinched victory.

Wharfedale battled to pull off an excellent and much needed win against South Leicester at the Avenue.

Tries from Oli Cicognini (2) and Adam Howard as well as 13 points from Tom Barrett’s boot sealed Dale’s first home victory of the campaign.

This was a tight loss for South, for whom Rickie Aley kicked 10 points.

Dan Ireland scored two first-half tries for the visitors and Patrick Marks crossed in the second period, but that wasn’t enough for the Midlands club who slipped to their fourth away defeat of the term.

Blaydon led at the break thanks to Matt Thompson’s hat-trick and a score from Jack Appleton while Henri Packard and Jamie Broadley (2) crossed for the Tigers.

The visitors then shocked Blaydon after the restart as Packard, Pete Swatkins and Ryan Holmes all went over to put Sheffield 10 points in front.

But Blaydon hounded their opposition and their endeavour was rewarded as Rob Lenderyou’s try was followed by Cooney’s effort to snatch the win after indiscipline from the Tigers.

Sheffield left it late, but they recorded their second win of the National Two North campaign as they edged out Leicester Lions.

James Wise scored early in the second half for the hosts but the decisive moment in the match came right at the death as Lewis Bowman darted over to clinch the win after an excellent display of defensive work by the home side.

The win for Sheffield leaves them six points from safety with a game in hand while the Lions fell to their second defeat in a row.

Otley secured their first win since September as they narrowly beat Macclesfield to pick up a vital victory at Cross Green.

Ben Smith’s penalty and an Alex Beaumont score saw the Yorkshire club edge a tight a tense second-half to condemn Macclesfield to their ninth defeat of the season.

The hosts shaded the first half as Tom O’Donnell and Karim Nasir went over, but Macc were very much in the contest following scores from Tom Mantell and Myles Hall.

Macc did go ahead through Lewis Barker’s penalty at the beginning of the second period, but the Blues couldn’t add to their total as Otley took a lead which they never relinquished.