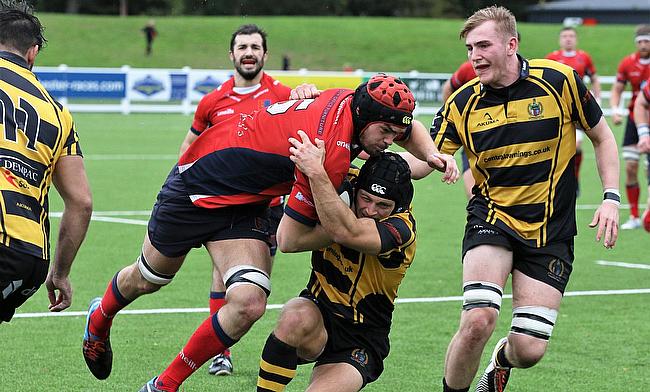 Hinckley’s winning start to the National Two North season came to halt in Round Seven as they were beaten by Chester at Hare Lane.

The Hornets failed to get on the scoreboard in Cheshire and their loss in the north-west saw them drop down to second in the table, with Hull Ionians now being the new leaders.

The I’s beat South Leicester to return to the summit while there were also wins for Sedgley Park, Huddersfield and Fylde.

Elsewhere in National Two North, Stourbridge battled to victory against Wharfedale, Preston Grasshoppers beat Macclesfield and Leicester Lions sealed consecutive victories after coming away from Otley with a win.

Hull Ionians have returned to the top of National Two North as they claimed their sixth win of the season against South Leicester.

South led through an early Benjamin Palmer try, but the visitors hit back as Ben Bell grabbed a quick-fire brace.

Lock James Newman extended Hull Ionians’ lead just before the interval as he crossed to make it 17-7.

South winger Mitchelle Stephenson grabbed a try just before the hour, but a score from Lewis Minikin took Hull clear and ultimately secured the win for the Yorkshire outfit.

Hinckley fell to their first defeat of the National Two North season as Chester battled to victory at Hare Lane.

Congratulations to @RUFCChester who kept Hinckley to nil for the 1st time since January 2014 on Saturday – they scored 3 tries, here are the highlights pic.twitter.com/0ExOJVfHgt

In the 13th minute, Thomas Holloway put Chester in front and his converted try was the only score of the first period.

David Ford’s effort double the hosts’ advantage midway through the second-half and Colin Campbell’s late try sealed the win for the Cheshire outfit who are now five points off the top two with a game in hand.

Matt Riley scored a hat-trick as Sedgley Park remain hot on the heels of the top two after a bonus-point win over Sheffield Tigers.

Riley (2) and Leon Simpson scored tries inside the first 20 minutes, but backs Jamie Broadley, Ryan Homes and Henri Packard replied for the Tigers.

Riley’s hat-trick, his first in 333 appearances for Sedge, saw his side go five points in front, but the visitors responded via a Joseph Duffy penalty and a Thomas Taylor-Dawes score to lead 29-24.

However, Sedge took control of this contest in the final quarter as Ben Black and Andy Riley both dotted down to clinch the victory for Matt Bebbington’s side.

Huddersfield secured their fifth straight victory as they beat Tynedale at Lockwood Park to stay fourth in National Two North.

Field, who are currently top of the form table in this division, actually trailed 14-7 at half-time as Richard Piper’s try was cancelled out by Ben Beaumont and Guy Pike.

Francis Entressengle and Lewis Workman then put Huddersfield in front with two tries in the space of three minutes, but Tyne re-took the lead following William Montgomery’s effort.

However, the hosts would have the final say as Piper’s second try seven minutes from time sealed yet another win for Gareth Lewis’ men.

Fylde returned to winning ways in style as they ran in seven tries in a comprehensive win over Peterborough Lions.

Tom Carleton began the rout before claiming his second try while Sam Dugdale and Tom Grimes also scored in the first period.

Henry Hadfield, Grimes and Luke Fowden crossed in the second half for the rampant hosts while Nico Deffo’s try 10 minutes from time was merely a consolation for the Lions.

Stourbridge secured their first victory in October by beating Wharfedale in a thrilling National Two North battle in the Midlands.

Mark Harrison, George Morgan, Joe Heatley and Dan Rundle all touched down for Stour while Rickie Aley landed 17 points from the tee.

Scores from Sam Gaudie and Rhys Lovegrove had kept Wharfedale in touch and second-half tries by Josh Burridge and Jack Blakeney-Edwards left the result in the balance.

But, two late penalties from the aforementioned Aley sealed a welcome victory for Stourbridge.

Preston Grasshoppers picked up their first victory in five matches as they beat Macclesfield at Lightfoot Green.

Tom Morton’s penalty gave Macclesfield an early lead, but it was wiped out by Luke Proctor’s unconverted try for the Hoppers.

Hoppers got back to winning ways on Saturday with a hard fought victory over @MaccRUFC. Check out the match report here. https://t.co/XLR5pu7kav pic.twitter.com/VY8LOYElpG

The same scenario occurred later in the half as Morton’s second penalty was followed by Proctor dotting down from close range to give Preston a 12-6 lead at break.

Alex Hurst’s try put Preston further in front and despite Jordan Davies responding for Macc, there was to be no late heartache for the Hoppers this time around as they clinched a much-needed win.

Leicester Lions scored five tries as they secured back to backs win by beating Otley at Cross Green.

Forwards Curtis Weaver and Ben Spokes both crossed in the first half to give the Lions a 10-8 lead at the break, while Ben Smith’s penalty and Joe Graham’s try kept Otley in touch.

Ethan Godefroy and William Burns exchanged scores after the restart, but tries from Alex Wilcockson and Simon Johnson sealed the victory for the Midlands club.