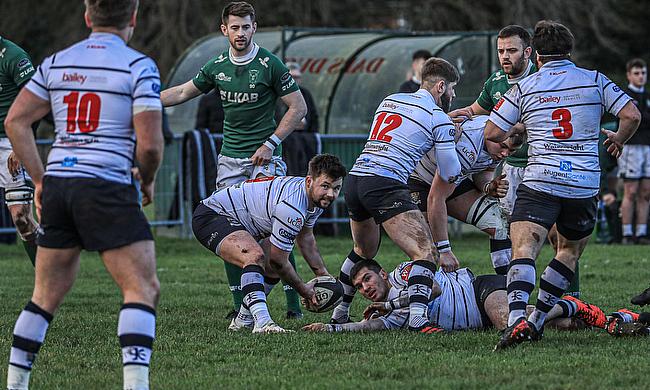 An excellent display by Preston Grasshoppers saw them clinch a welcome win in National Two North as they defeated Scunthorpe in Round 17. Photo Credit: (Maria and Bill Rhoades)

Paul Arnold’s men tasted victory for the first time since October and their triumph in Lincolnshire could provide the spark they need to dig themselves out of trouble.

Preston are now eight points from safety after rivals Luctonians, Wharfedale and Huddersfield picked up losing bonus-points on the weekend.

They all lost by narrow margins against Hinckley, Fylde and Sedgley Park, respectively whilst at the top, Caldy marched on as a superb display against Sheffield Tigers keeps them eight points clear.

Elsewhere, Loughborough Students scored 10 tries on their way to beating Chester, Stourbridge repelled a late fightback from Hull and Otley edged past Tynedale.

Caldy’s relentless form in National Two North continued on the opening weekend of 2020 as they brushed aside Sheffield Tigers.

Winger Ben Jones scored a hat-trick at Paton Field as the dominant league leaders cruised to their 12th bonus-point victory of the season.

Nick Royle, Mike Barlow, Cameron Davies and John Parker also scored for Caldy, who remain eight points clear at the summit with a game in hand.

Mark Ireland’s 79th minute converted try with the only points for Sheffield Tigers as they failed to stop Caldy from extending their winning run to 16 matches.

Fylde maintained their grip on second place in National Two North as they earnt a hard-fought win over Wharfedale at Woodlands.

A brace from David Fairbrother, as well as scores via Connor Wilkinson and Nick Ashcroft, proved to be enough for Fylde but the hosts had to defend resolutely in the final 15 minutes.

Matt Speres and Oli Cicognini both went over to help the visitors move to within a converted score of Fylde, but despite immense pressure combined with the home side being reduced to 13-men at one stage, Dale couldn’t salvage a last-gasp draw in Lancashire.

Sedgley Park are still four points behind second-placed Fylde, with a game in hand, following a dramatic win over Huddersfield.

The visitors led through Josh Crickmay’s 19th minute try but Sam Lowthion responded for the hosts before the centre’s second, in reply to a superb Tom Hodson effort, gave Sedge a 14-10 lead at the break.

Leon Simpson then went over for the home side, but a penalty try and a score eight minutes from time by Lewis Bradley put Huddersfield ahead.

However, there was to be a late twist at Park Lane as Steve Collins converted his own try on 78 minutes to clinch the bonus-point win for Sedge.

Loughborough Students opened their account for 2020 in dazzling style as they scored 10 tries to demolish Chester.

Will Brown and Dan Kelly both scored two tries apiece, while Tom Stapley, Bamidele Fadahunsi, Lewis Holsey, Will Kaye, Owen Waters and Cameron Boon put their opposition to the sword.

Chester were 21-0 down before their scored their first try of the afternoon through Alick Croft and the visitors were still in the contest just before half-time as Croft and Shay Owen reduced Loughborough’s lead to seven points.

However, the Cheshire outfit were blown away in the second period but further tries from Tom Holloway and John Craven made sure they left the Midlands with a bonus-point.

Hinckley kept their positive run of results going in National Two North with a bonus-point victory over Luctonians.

David Peck, Joe Wilson, Rory Vowles and Callum Dacey all scored for the Hornets, who have now won four of their last five games.

Luctonians did actually lead this contest heading into the final 10 minutes as Rob Lewis scored two tries for the home side whilst John Morris pinged over both conversions and a brace of penalties.

However, Dacey’s effort eight minutes from time wrapped up a hard-fought triumph for an in-form Hinckley.

Stourbridge survived two late yellow-cards and a storming comeback from Hull to begin the New Year with a victory.

Callum Morris’s try and penalty helped Stourbridge to a narrow 8-3 lead at the break and the Midlands side extended their advantage in the second period.

Morris’s second, as well as scores from Jack Lea and Dan Rundle, built a 22-point lead for the visitors but the final 10 minutes was far from comfortable.

Alex Heard’s try for Hull gave the hosts something to shout about, but when Stour’s James Rodley and Joe Heatley were sin-binned, the home side smelt blood.

Thomas O’Donnell’s converted score and a penalty from Douglas Flockhart set-up a tense finish in Yorkshire, but Stour did enough to hold on.

Quick-fire second-half tries from Ben Magee and Elliot Morgan steered Otley to a narrow win over Tynedale at Cross Green.

Tynedale took the lead with an early Seamus Hutton try and they led 10-6 at the interval thanks to a Jake Rodgers penalty, either side of two kicks from his opposite number Ben Smith.

Rodgers landed his second penalty to increase Tyne’s advantage, but two scores in two minutes from Magee and Morgan proved to be the difference for Otley.

Tyne rallied in the final quarter as they camped themselves in the Otley 22 and their pressure was rewarded with a penalty late on. The North-East outfit opted to kick to the corner rather than go for the posts, but their gamble didn’t pay off as Otley claimed the win.

Tom Foster crossed to put Scunthorpe ahead after Preston had seen both Sam Wallbank and Scott Jordan sent to the sin-bin, but the visitors responded before half-time as Tom Davidson notched his second penalty of the afternoon.

It was a different story after the break as Preston swiftly took control of this encounter thanks to a Chris Taylor double.

Lock Alastair Murray crashed through on 64 minutes and Taylor’s hat-trick score wrapped up a welcome victory for Hoppers, who are now eight points adrift of safety.