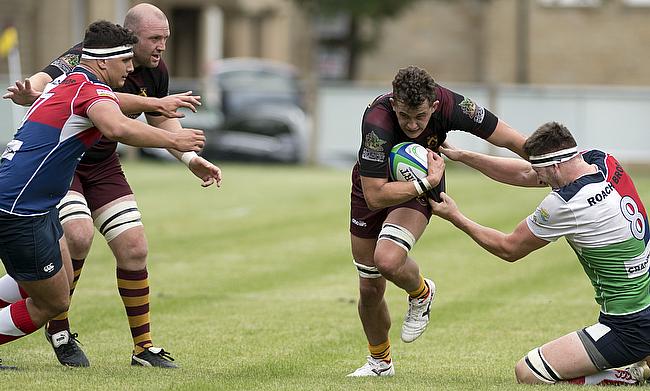 In recent weeks, the spotlight has been on the sides at the top of the division but the attention switches to the wrong end of National Two North in Round Five. (Photo Credit: Ray Morris)

Two of the current bottom three clubs meet this weekend when Huddersfield take on Scunthorpe and both teams will be desperate to claim their first victories of the campaign.

Otley are also another side yet to taste that winning feeling and they travel to Hinckley on Saturday hoping to end their drought.

However, picking up victories hasn’t been difficult for table toppers Caldy so far this season and they will be aiming for a fifth successive triumph when they host Luctonians in Round Five whilst second-placed Fylde put their unbeaten record to the test against Tynedale.

There has been nothing laboured about Caldy’s start to the National Two North campaign. Four consecutive wins means the Wirral outfit currently lead the way at the top of the division and the early signs suggest they mean business as Gareth Davies’ side aim for an instant return to National One.

Caldy’s next challenge is a home fixture with Luctonians, who began life back in the fourth tier extremely well. An excellent win over Tynedale was the perfect start for Ryan Watkins’ men, but three successive losses have followed since their opening day triumph. The Lucts began September with a victory so could they upset the odds and kick off October in the same manner?

Fylde have made their best start to a season for eight years as Warren Spragg’s side remain unbeaten as they enter October. Three victories and draw against Lancashire rivals Preston Grasshoppers has resulted in Fylde currently occupying second spot in the division and they are just one point behind Caldy.

They will fancy their chances of extending their good form away at Tynedale, but the hosts come into Round Five with a spring in their step. Following a frustrating opening to the campaign, Ben Woods’ side finally sparked their season into life last weekend as they secured an excellent victory over Sedgley Park. The North-East side will be hoping that win wasn’t a flash in the pan as they go in search of successive wins.

A surprising loss to Hull in Round Three would have been massively frustrating for Stourbridge after a perfect start to the season, but Neil Mitchell’s side were able to immediately respond last time out. The Midlands club had to battle hard, but eventually they saw off Otley to move up to third place in National Two North.

This weekend, they entertain the side directly below them in the table as Sedgley Park arrive at Stourton Park aiming to bounce back. Scott Barrow’s side came unstuck against Tynedale in Round Four which ended their winning start to the season so the Tigers will be after a response this weekend. Sedge also lost this corresponding fixture 36-29 last year so the North-West outfit may also want to set the record straight.

Preston Grasshoppers will reflect on the first month of the campaign and they should be relatively happy. Paul Arnold’s side may have begun the season with an opening loss to Sedgley Park, but a battling draw with rivals Fylde plus excellent wins over Scunthorpe and Sheffield Tigers means the Hoppers currently sit in fifth place as we get October underway.

Both of Preston’s victories have come at Lightfoot Green so they will be keen to translate that form on to the road, starting with this visit to Wharfedale. The hosts secured a well-deserved victory over Scunthorpe in Round Four and it was perhaps the shot in the arm the Yorkshire outfit needed after successive losses to Sedgley Park and Fylde. Now, Rob Baldwin and Jon Feeley’s side will be eager to clinch their second victory of the campaign when Preston visit the Avenue.

Hull lost their first game of the National Two North campaign last time out, but that shouldn’t take anything away from their eye-catching start to the season. After clinching promotion, Gary Pearce’s men head into October in sixth place with excellent wins over Tynedale and Stourbridge to their name.

However despite sitting one place below Hull in the league standings, Chester appear to be in better form as they prepare to host the Yorkshire club this weekend. Following a disappointing beginning to the campaign, Jan van Deventer’s side have shaken off their early season rust to secure back-to-back victories against Loughborough Students and Hinckley, which has ignited their campaign. The Cheshire outfit will now be searching for a hat-trick wins, but this will be an intriguing contest at Hare Lane.

It has been a mixed start to the season for Sheffield Tigers. Excellent wins over Chester and Scunthorpe have been followed by successive losses against Caldy and Preston Grasshoppers so Jamie Broadley’s side will be keen to look past their recent setbacks and focus on returning to winning ways in Round Five.

The Tigers were only narrowly beaten last time out as were Loughborough Students, but they have really struggled in National Two North since relegation from the third tier. The Midlands club have managed just one victory so far and they are only outside the relegation places on points difference. It is still early days for Rhys Edwards and his side, but they will be keen to arrest their frustrating run of form as swiftly as possible.

Two weeks ago, Hinckley may have been becoming slightly concerned with how they had begun the season, but their campaign burst into life as September drew to a conclusion. Consecutive wins over Luctonians and Hull suggest things are starting to click for Scott Hamilton and his side as they prepare to welcome Otley to Leicester Road.

The visitors come into this fixture wondering how and why they still haven’t been able to secure their first win of the campaign. Narrow losses against Wharfedale and Stourbridge have bookended successive draws with Huddersfield and Tynedale so after a frustrating September, the Yorkshire club will be itching to open their account for this season this weekend.

The league’s bottom two clubs go head-to-head this weekend in National Two North, but I highly doubt many would have expected to see Huddersfield occupying an early spot in the relegation places. Gareth Lewis’ side are yet to hit the heights of last season having drawn two and lost two matches thus far, but this Saturday might be the best opportunity for Field to get up and running.

We are looking for our first win of the season as we face @ScunthorpeRUFC tomorrow at Lockwood Park, 3pm KO. Come down and show the boys your support!

However, Scunthorpe may well be thinking exactly the same thing. The Greens are yet to get off the mark on their return to this level so an away victory at Lockwood Park would certainly give Tim Robinson’s side a lift. We are only four games into the season, but both clubs may well be treating this fixture like a ‘must-win game’ in order to kick-start their respective campaigns.