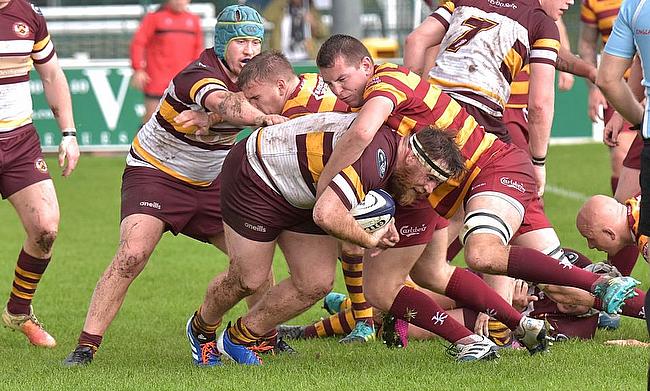 Huddersfield battled to a hard-fought victory over Loughborough Students to lift themselves out of the relegation places in National Two North. Photo Credit: (Chris Farrow)

Gareth Lewis’ side had slipped into the drop zone last weekend, but a win in Round 14 means Field are now two points clear of the trapdoor heading into the penultimate fixtures of 2019.

Luctonians now occupy a spot in the bottom three after losing at Wharfedale whilst Preston Grasshoppers’ woes continued against Hull at Lightfoot Green.

At the top, Caldy stretched their remarkable winning run to 13 matches as they breezed past Tynedale and second-placed Fylde are now eight points clear of Sedgley Park (3rd) after beating their rivals at Woodlands.

Elsewhere, Chester came away from Stourbridge with a victory following a pulsating contest whilst Hinckley dazzled against Sheffield Tigers and Otley hammered Scunthorpe.

Aigbokhae opened the scoring for Gareth Davies’ side and Caldy found themselves 14-0 to the good at the break thanks to JJ Dickinson’s effort.

Jonathan Cousin and Guy Pike scored Tynedale’s tries, but the North-East club had no answer to the impeccable table toppers.

Fylde have created some breathing space in the race of a top two spot after defeating rivals Sedgley Park at Woodlands.

Tries from Scott Rawlings and Tom Carleton, plus a penalty from Greg Smith, put the hosts 17-0 up early in the second half.

#Fylde maintain 2nd place in #N2N with a 17-10 victory v @SedgleyTigers. @spraggio said of last 10 mins: "To hold them out showed real strength of character & a huge effort, denying them a score – those boys will be unbelievably tired now!"

James Harper crossed to get Sedge on the board and three points from the boot of Steve Collins put the visitors right back into this contest with 25 minutes remaining.

Fylde’s Jacob Connor was also sin-binned, but despite immense pressure from Sedge, Fylde held out superbly to secure what could be a crucial win come the end of the season.

Huddersfield defeated Loughborough Students at Lockwood Park to move out of the relegation places in National Two North.

The home side led 17-5 at half-time, with Tom Hodson and Lewis Workman going over, only after Worcester Warriors’ Lewis Holsey had opened the scoring for the Students.

Richard Piper crossed for Field to stretch their lead, but a penalty try just after the hour kept Loughborough in contention.

However, Huddersfield found themselves on the right end of another close encounter as Will Milner slotted a late penalty.

Tries from the impressive Joe Wilson, Callum Dacey and Lamb put the Hornets 21-17 up at the break, with a brace from Sheffield Tigers’ Pete Swatkins keeping the visitors in touch.

However, Lamb went over on two more occasions as Hinckley recorded a fourth consecutive home win whilst Dacey and Alex Salt also crossed in the second period.

Full-back Wilson finished with 18 points to his name, whilst Mark Ireland kicked two penalties after the interval for the Tigers.

Chester are up to sixth in National Two North as they extended their unbeaten run to five matches following a pulsating victory against Stourbridge.

A breathless opening half an hour saw Chester race into a 33-0 lead with Will Du Randt, George Baxter (2), Harrison Vare and Shay Owen all crossing,

However, Stour were able to begin a fightback before the break as George Morgan, Jack Samuel and Nick Murphy all went over to conclude a remarkable first period of rugby.

Stour then chipped away at Chester’s lead and Dan Rundle’s try narrowed the gap further. Chris Scott pinged over a late penalty to set up a tense finish, but the visitors were able to see the game out in the Midlands.

Otley ran in 10 tries to inflict a heavy defeat on bottom of the table Scunthorpe at Heslam Park.

The visitors, who had lost three straight matches heading into this fixture, returned to winning ways in some style whilst Scunthorpe’s search for a first victory of the campaign continues.

Otley were 26-17 up at half-time and they ran riot in the second-half as they took the game away from the hosts.

The Greens had been firmly in this contest at the break after scores via James Dyson, Will Scammell and Grant Elliot, but Dyson’s second was all Scunthorpe could muster up after the interval.

Preston Grasshoppers’ tough run of form continued as they suffered another defeat against Hull at Lightfoot Green.

Paul Arnold’s side are currently eight points from safety in National Two North after slipping to their sixth straight loss.

For Hull, this was their third successive victory and Gary Pearce’s men are now six points clear of danger, but they had to come from behind in Lancashire.

A converted try and two penalties from Preston’s Nick Gregson gave the Hoppers a 13-3 lead shortly after half-time, but scores from Stephen Johnson and Tom O’Donnell, plus a second penalty from Simon Humberstone, saw Hull battle back to secure the victory.

Wharfedale picked up a welcome victory as they comfortably beat Luctonians at the Avenue.

Jack Blakeney-Edwards slotted over two penalties in the first-half as Dale opened up a 6-5 lead at the interval, after Aiden Cheshire had gone over for Luctonians on 24 minutes.

Fly-half Blakeney-Edwards then added a converted try to his tally in the second period before the hosts capitalised on yellow cards shown to Lucs’ Owien Harriott-Davis and Callum Young.

Both Oli Cicognini and Oscar Canny dotted down as Wharfedale ended a three-game winless run and the victory also moved the Yorkshire club five points clear of the relegation places.