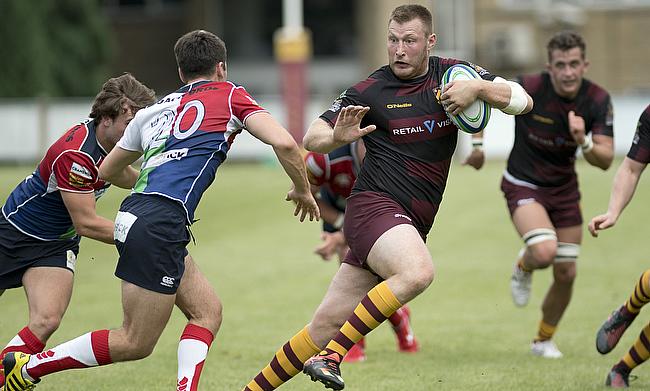 Hull Ionians and Huddersfield will have their sights set on victory this weekend as both clubs clash in a mouth-watering title battle in National Two North.

With Hull Ionians sitting five points clear at the summit after successive wins, Martyn Wood’s side can strengthen their promotion bid further at Lockwood Park on Saturday.

However, the I’s have lost five of their last six away matches so this statistic may give Huddersfield some encouragement. Gareth Lewis’ men lost a small amount of ground in the title race last weekend as they were beaten by Wharfedale, but they can produce the perfect response if they topple the league leaders in Round 24.

Watching with interest will be promotion rivals Chester and Fylde. The former host South Leicester on Saturday while Warren Spragg and his side entertain Stourbridge at Woodlands.

Down at the bottom, time seems to be running out for Peterborough Lions and Macclesfield. Both clubs currently sit in the drop zone and have an awful lot of work to do to avoid relegation with just seven games to go.

Two weeks ago, all the pressure seemed to be on Hull Ionians. Three straight defeats had seen their title challenge come to a halt and Martyn Wood’s side had dropped to third in the table. However, it has been quite the response from the I’s. A crucial win over promotion rivals Fylde was followed by a thumping victory against South Leicester last week and Hull now sit five points clear of the chasing pack as we enter March.

Last Saturday was also made sweeter for the Yorkshire club because fellow top spot contenders Huddersfield and Chester both lost their respective matches. Chester were beaten by Hinckley while Field fell to a home defeat against Wharfedale, however, the latter have the chance to respond in Round 24 when they host the league leaders. Despite losing to Wharfedale, Gareth Lewis’ side still advanced into second place and with another game in hand to come on March 16th, the men from Lockwood Park can send out a statement this weekend against Hull Ionians. Once again, this is a huge Saturday in the title race as we begin the final stretch in the campaign.

After moving level on points with Hull Ionians in Round 23 following a late draw with Stourbridge, Chester failed to keep the pressure on at the top after suffering a defeat against Hinckley in their game in hand. Jan van Deventer’s side were second best in the Midlands and now they have fallen out of the promotion places with seven games to go in the season.

Granted, Chester are only in third spot because second-placed Huddersfield have a better ‘Points Difference’ and the men from Hare Lane will be itching for a reaction when they entertain South Leicester this weekend. The visitors to Cheshire may still be licking their wounds after their 59-10 defeat against Hull Ionians and the result kept them in the relegation zone as we begin the penultimate month of the season. South are currently 11 points from safety so it is a hole they can dig themselves out of, but over their next three matches, they face the other title contenders so a tough few weeks lie in wait for the Midlands club.

Considering Fylde haven’t played for almost two weeks, the last few days have been pleasing for the Lancashire side. On Tuesday, club legend Sir Bill Beaumont was knighted by the Queen at Buckingham Palace and last Saturday would also have brought smiles to Fylde faces. With promotion candidates Huddersfield and Chester both suffering defeats, Warren Spragg’s men are only two points off the top two as their rivals failed to take advantage of their respective games in hand.

The men from Woodlands can maintain their promotion push when they host Stourbridge in Round 24, but Fylde will be wary of their visitors. Neil Mitchell’s side arrive in the North-West on a three-match unbeaten streak, which includes a draw with Chester. In truth, Stour may have deserved to beat the Cheshire club two weeks ago, but they showed more than another quality which could trouble Fylde this weekend. The Midlands outfit lost the reverse fixture at the beginning of November so can they continue their good form and gain their revenge on Saturday?

Fifth-placed Otley fell to a narrow defeat against Tynedale in Round 23, but despite the slight setback, the Yorkshire outfit are still in the top two conversation as we head into March. With a couple of the teams above them faltering last week, Charlie Maunder and Tom Casson’s side are only eight points behind second-placed Huddersfield and they are firm favourites to stay in the promotion hunt on Saturday.

Otley have won 10 of their 11 matches at home this season and they welcome bottom of the table Peterborough Lions to Cross Green this weekend, with the visitors desperate for a victory. As things stand, the Lions are 25 points from safety with seven games to go and their immediate relegation back to the fifth tier looks certain. The men from Bretton Woods cannot fall through the trapdoor this weekend and a first away victory of the campaign would just delay what seems to be the inevitable.

It was the ideal response from Hinckley. After seeing their unbeaten home run come to an end against Huddersfield in Round 23, the Hornets reacted by recording a comfortable win over promotion chasing Chester in their game in hand last weekend. Director of Rugby George Chuter told the club website “It was the best game they [Hinckley] had played all year” with Callum Dacey standing out after scoring four tries.

Victory at Leicester Road was a welcome shot in the arm for the Midlands club, but now it is back to the usual narrative. Hinckley are on their travels this weekend and they have lost seven of their last eight away matches which is why they have been unable to sustain a challenge for a top two spot. They will be hoping for more joy on the road, but Sedgley Park come into this clash in a rejuvenated mood. Four wins from their last six games has boosted morale in Matt Bebbington’s squad and Sedge could even move into the top five if results go their way this weekend.

It was far from slick and free-flowing, but Tynedale were able to comprehensively beat Peterborough Lions last week to continue their excellent recent form. Ben Woods’ side have won six of their last seven games since the turn of the year and their current run has lifted them up to seventh in the National Two North standings.

Tyne also have a game in hand to come on March 16th against Huddersfield so if the North-East side can maintain this level of performances, they may even be outside bets to make a late charge for a top two spot. However, that is a long way off and first up for Tyne is a visit to Preston Grasshoppers. Last week, the Lancashire club thumped Macclesfield as Paul Arnold’s men push for a top eight finish in what has been an excellent campaign so far. Hoppers have won four of their last five games so with two in-form sides meeting in Round 24, we should be in for a cracker at Lightfoot Green.

A brilliant all-round performance from Wharfedale against promotion chasing Huddersfield last week saw the Greens secure their fifth win on the spin. On Dale’s club website, they mention it is the first time since October 2013 that the men from the Avenue have managed five successive victories which is testament to the work Rob Baldwin and Jon Feeley have done this term.

Over the last few seasons Dale have been battling against relegation at this stage of campaign, but this time, their sights are set on a top eight finish. This weekend, they travel to 12th placed Leicester Lions and the hosts will be keen to build on their last outing against Macclesfield. A gritty win over the Cheshire club means Andy Key’s side are now 15 points clear of the relegation places so the Lions may well be targeting two or three more wins to confirm their status in National Two North for another year.

For both Sheffield Tigers and Macclesfield, it is easy to label their meeting at Priory Park in Round 24 as a ‘big game’. The Tigers arrive in Cheshire 11 points clear of safety, but Jamie Broadley’s side have won just one of their last eight games. The Yorkshire outfit were well beaten at Dore Moor against Sedgley Park last week, but a couple of victories between now and the end of the season should be enough to keep Sheffield Tigers in the division.

TEAM NEWS!!! The team for the @SheffTigersRUFC game at home at Priory Park is out!! Nice to see Tom Brand return!! #macclesfield #maccrugby #macclesfield pic.twitter.com/SIV7DAFFpg

The Tigers may well be targeting this game as one where they can pick up a victory. Macclesfield come into this clash on the back of a hammering against Preston Grasshoppers and Marshall Gadd’s men now sit 20 points adrift of safety with seven games to go. The Blues were able to pull off an escape last year, but time is running out for lightening to strike twice. Macc have lost their last eight matches so a win this weekend could be seen as a requirement if they are to stand any chance of avoiding the drop.