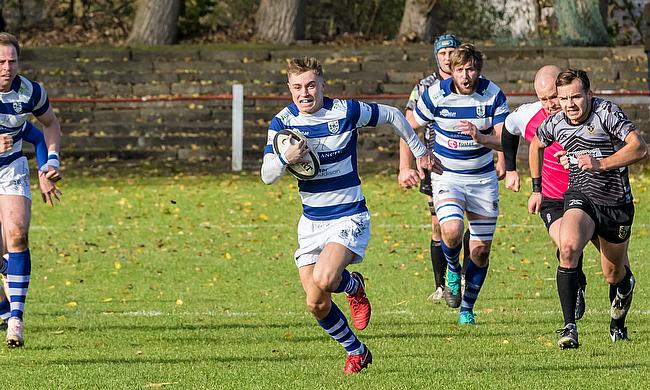 Hull Ionians narrowly beat Huddersfield to extend their lead at the top of National Two North to six points.

The I’s also halted Field’s seven game-winning run and now the Yorkshire side have some breathing space at the summit of the division.

Hinckley moved back into the top two after defeating Sedgley Park while Chester are very much in the promotion race after easing to a victory over South Leicester.

The aforementioned South have fallen into the relegation places because Tynedale secured a late victory over Preston Grasshoppers to move out of the drop zone. Ben Woods’ men are now three points clear of danger while there was also an important win for Sheffield Tigers who thrashed Macclesfield in Round 10.

Elsewhere, Wharfedale continued their excellent form with a home win over Leicester Lions and both Otley and Fylde secured victories on the road.

The teams, who were the top two sides in the division heading into this Yorkshire derby, traded scores as Harry Davey’s try was cancelled out by James Sanderson before Ben Bell raced over to give the I’s a slender half-time lead.

Elliot Knight then dotted down to level up the scores, but Ed Falkingham’s effort put Hull 17-12 up.

The boot of Will Milner kept the visitors in touch, but it was the kicking of Lewis Minikin that saw the hosts seal their sixth victory in a row as he landed a late penalty.

Hinckley moved back into second place in National Two North thanks to a bonus-point win over promotion rivals Sedgley Park.

Tries from Scott Hamilton and Aaron Phillips saw Hinckley lead 12-0 and Joe Wilson’s penalty along with Alex Branson’s score put the hosts 22-7 ahead at the interval.

Matt Riley had touched down before the break for Sedge, but the visitors fell further behind on 42 minutes as Ben Pointon crossed.

Andy Riley grabbed Sedge’s second score of the afternoon, but Wilson’s late penalty wrapped up the win for Hinckley.

Chester breezed to a third win from their last four games as they beat South Leicester to stay firmly in the promotion race.

Michael Craven’s early try set the tone for the afternoon and a brace from Craig Ross gave Chester a 15-0 lead at the break.

Craven added his second on 55 minutes before Callum Bennett crossed the whitewash to seal the victory for the Cheshire side, who are now just three points off the top two with a game in hand.

Wharfedale maintained their excellent form as they narrowly beat Leicester Lions to secure their third win on the spin.

Jack Blakeney-Edwards scored all of Dale’s points in the first half as the hosts led 13-8 at the interval, while John Murdoch’s try and Harry Key’s penalty kept the visitors in touch.

Another 5 point game for The Dale and now up to 6th place ??

It’s a Yorkshire Cup fixture next Saturday at home vs. Pocklington, then back to Nat2N action vs. Chester away on the 17/11.

Phil Woodhead and Rhys Lovegrove then crossed for Wharfedale and Devon Constant, Alex Wilcockson and Max Titchener did the same for Leicester, but a penalty try awarded to the hosts ultimately sealed the victory on 71 minutes.

The Lions did continue to battle and Constant’s second score set-up a grandstand finish, but the home side held on for the win.

Otley secured their third victory in a row as they defeated bottom of the table Peterborough Lions at Bretton Woods.

Otley had the better of the first half and led 14-5 thanks to two Ben Magee tries, while Charley Robinson crossed for the Lions.

Both sides exchanged scores after the break as Paul Petchy’s effort was matched by Christian Edbrooke before two tries in the final 10 minutes via Harry Skelton and Ben Smith wrapped up the win for the Yorkshire outfit.

Fylde recorded a welcome victory as a second half blitz helped them triumph over Stourbridge.

After trailing 3-0 at the break, Cameron Crampton scored two tries while Greg Smith and Ben Gregory also crossed for the visitors inside an 18-minute period.

Tom Carleton’s score, sandwiched in-between Stourbridge tries from Mark George and Joe Heatley, completed the win for Warren Spragg’s side after back to back defeats.

Sheffield Tigers head into the first break of the season following a thumping win over Macclesfield at Dore Moor.

Jamie Broadley ran in four tries for the hosts, who secured their first victory since the end of September.

Henri Packard had opened the scoring inside the first minute for the Tigers while Frank Wragg, Pete Swatkins and Lewis Bloor also went over.

Jordan Simpson scored Macclesfield’s only try meaning the visitors are now nine points from safety after their eighth loss of the campaign.

Tynedale have moved out of the bottom three in National Two North as a converted Ben Haigh try secured a dramatic win over Preston Grasshoppers.

The visitors went 19-5 ahead after tries from Tyler Spence (2) and Sam Stott, but scores by Chris Wearmouth, Haigh and Jonathan Burden put Tyne 24-19 in front.

James Fitzpatrick’s try and Thomas Davidson’s penalty gave the Hoppers the lead, but Haigh crossed for his second score and Jake Rodgers stayed cool to kick the winning points for Tynedale.