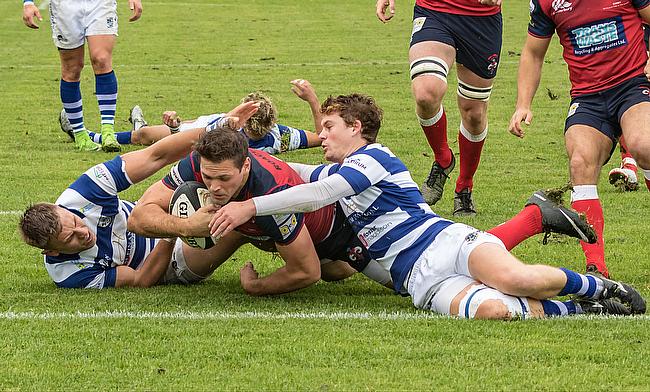 Hull Ionians ended a difficult month with a victory over Tynedale to maintain their place at the summit of National Two North.

Prior to their Round 16 clash, the I’s had lost two of their last three matches, but victory at Brantingham Park leaves them three points clear of the chasing pack.

Second-placed Chester remain hot on their heels after thrashing Macclesfield while Fylde moved up to third spot after a derby day win against Preston Grasshoppers.

Huddersfield now sit fourth in the division after beating Otley, but also because rivals Hinckley were held to a draw against Peterborough Lions.

The Lions are still rooted to the foot of the table while fellow strugglers South Leicester are now 10 points from safety after losing to near neighbours Leicester Lions.

Hull Ionians ran in six tries to remain at the top of National Two North as they survived a late resurgence from Tynedale.

Chris Wearmouth crossed early on to give Tyne the lead, but scores from James Newman and Lewis Minikin put the hosts in front.

Minikin extended Hull Ionians’ advantage with his second try of the afternoon, but Ben Beaumont kept Tyne in the contest as the North-East side made it 19-10.

Despite the fightback from Tynedale, this was a welcome win for Hull Ionians after a tricky December and they now sit three points clear at the summit.

Chester ensured they kept the pressure on league leaders Hull Ionians by clinching a bonus-point win over Macclesfield at Hare Lane.

The second-placed side led 21-10 at half-time and continued to be ruthless after the break in this all-Cheshire affair.

Charlie Warren, Sam Stelmaszek, Myles Hall and Sam Broster touched down for Macclesfield, who are now 14 points from safety in National Two North.

Fylde climbed into third place in National Two North following a bonus-point win over local rivals Preston Grasshoppers in front of a crowd of 1,794 at Woodlands.

James Bailey and Jacob Connor went over for Fylde in the first-half and they were able to shut out Hoppers in the opening 40 minutes.

Tom Carleton’s try extended Fylde’s lead in the second-half, but James Fitzpatrick responded to put Preston on the board.

Matt Garrod looked to have sealed the win with Fylde’s fourth try of the afternoon, but two scores from Oga Mabaya and Alex Ward gave Preston a glimmer of hope.

However, Fylde made sure of the victory when Adam Lewis dotted down and it is now seven games without defeat for Warren Spragg’s side.

Hinckley’s promotion hopes suffered a slight dent in Round 16 as they had to settle for a draw against bottom of the table Peterborough Lions.

Tom Lewis and Suva Maasi scored converted tries to give the Lions a 14-12 half-time lead, with Aaron Phillip and James Moreton crossing for Hinckley.

#2018 finished with a 19 – 19 draw with @pborolionsrfc – the tries came from Philip, @Moreton_J and @OPovoas – merry christmas and happy new year to you all and we see you for @wharfedalerufc away in early January pic.twitter.com/P4FvGJda4g

Vuli Veikune dotted down to put the visitors further ahead, but Oliver Povoas’ effort on 68 minutes levelled the scores.

Both teams then went on the attack to try and snatch the win, but neither side could find an opening as Peterborough Lions became the first team to stop Hinckley from winning at Leicester Road this term.

Huddersfield secured a welcome victory over Otley in their final game of 2018 at Lockwood Park.

Tries from Lewis Workman and Jack Maplesden either side of half-time helped the hosts over the line while the impressive Chris Johnson kicked 13 points.

Otley scored tries of their own through Brett Mitchell and Jack Mackie, but they couldn’t continue their excellent form against their Yorkshire counterparts.

The win for Huddersfield leaves them 10 points off second-placed Chester with a game in hand.

Sedgley Park came from behind in the final 13 minutes to pick up a victory against Wharfedale at Park Lane.

The home side went in front via Andy Riley’s try but George Hedgley’s effort made it level at the break.

Jack Blakeney-Edwards and Steve Collins exchanged penalties after the restart, but Dale were able to go in front when Harry Bullough crossed the whitewash.

However, a second penalty from Collins cut the gap to two points before Leon Simpson went over for the decisive score for Sedge.

Stourbridge avoided a fourth straight defeat as they produced a remarkable comeback to beat Sheffield Tigers.

The visitors had led 31-7 after 20 minutes at Stourton Park thanks to tries from Lewis Bloor, Tom Hart, Jamie Broadley and Kain Rix.

But Reece Beddows was able to add to his earlier try for Stour and Nick Murphy also crossed to cut the gap to 10 points at half-time.

Two penalties via Chris Scott and a score by Jack Lea gave Stour the lead before tries from Joe Heatley, Nigel Mukarati and Dan Rundle ultimately sealed the victory for Neil Mitchell’s side.

Sheffield Tigers did claim a fifth score late on following Henri Packard’s effort, but a second-half blitz from Stour was enough for the win.

Leicester Lions are now 10 points clear of the drop zone in National Two North as they recovered from a slow start to beat local rivals South Leicester.

The hosts ran in tries through Joe Lane, Javiah Pohe and Martin Wolfenden to lead 21-0, but scores from Devon Constant and Alex Wilcockson – as well as two penalties from Harry Key – made it 21-20 at half-time.

Wilcockson’s second, plus efforts from Samuel Benjamin and Constant, gave the Lions a 16-point lead.

Wolfenden grabbed another score as South clinched a try-bonus point, but it was merely a consolation as the Lions claimed the bragging rights at Welford Road.