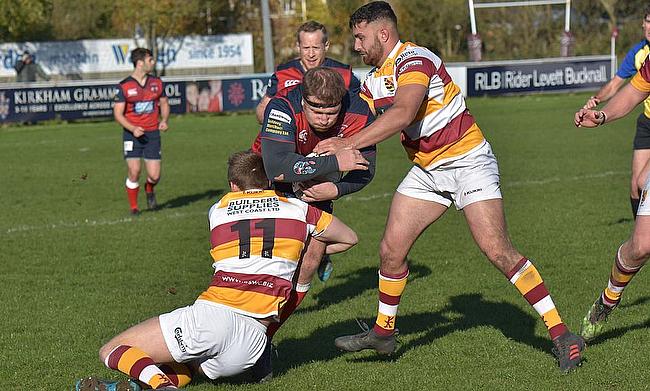 National Two North leaders Hull Ionians will be looking to bounce straight back from their loss to Preston Grasshoppers when Macclesfield visit Brantingham Park on Saturday.

Hull’s advantage at the top of the division was cut to five points after they fell to just their second defeat of the campaign and up next, they host a Macclesfield side who are aiming to dig themselves out of trouble.

Marshall Gadd’s men picked up a superb win against Hinckley in Round 13 and they will need to produce a similar display if they are going to get anything in Yorkshire this weekend.

Macc’s rivals at the foot of the table, Peterborough Lions and South Leicester, take on Sheffield Tigers and Otley in Round 14 while Leicester Lions make the short trip to Hinckley.

At the right end of the division, second-placed Chester will be keen to keep the pressure on Hull Ionians when they host Sedgley Park and Huddersfield’s sights will be set on staying in the promotion race, but they take on an in-form Fylde side this weekend.

Last Saturday, Hull Ionians were left stunned. The league leaders began December in fine form and carried an eight-game unbeaten run into their fixture with Preston Grasshoppers. However, at Lightfoot Green, they were second best as they slipped to a first defeat since the end of September after a powerful performance from the Lancashire outfit. The I’s do remain at the top of the division, but their lead has been cut to five points as they prepare to welcome Macclesfield to Brantingham Park.

Many may see this as the perfect game for Hull to have after their loss last week because Macc are in the bottom three, but the visitors showed exactly what they are capable of in Round 13. A superb display against fourth-placed Hinckley saw Marshall Gadd’s side clinch only their third win of the campaign and the Blues are now 10 points adrift of safety. The task facing Macc this weekend is arguably the toughest in the league as Hull Ionians have won their last 22 matches at this level on their own patch, but could the Cheshire side upset the odds?

Chester did what they needed to do last Saturday. A narrow away win against promotion rivals Huddersfield tightened their grip on second spot, but when they saw the results which Hull Ionians and Hinckley were involved in, it turned out to be the perfect weekend for Jan van Deventer’s men. The Cheshire outfit are just five points off Hull Ionians and the same margin separates themselves and third placed Huddersfield, but they will face a tough test in Round 14 when Sedgley Park visit Hare Lane.

Matt Bebbington’s side enter this weekend after a welcome victory against South Leicester following a very tough November. Defeats against Hull Ionians, Hinckley and Stourbridge had really dented any promotion ambitions they may have been harbouring, but now, they are only eight points off Chester as things stand so a victory for Sedge could spark their top two hopes back into life.

After falling to a defeat against a fellow promotion candidate in Round 13, Huddersfield will be keen to bounce back this weekend when they travel to Fylde. Gareth Lewis’ side are still very much in the mix for a top two spot, but one win from their last four games has just halted their progress as they look to continue their excellent campaign thus far.

However, they visit a Fylde side in Round 14 who are bang in form. Four straight victories for Warren Spragg’s side has pushed them to the cusp of the promotion race as the Lancashire outfit sit just seven points off the top two as things stand. This is Fylde’s best run of form for nearly five years and they could actually leapfrog Huddersfield into top three if results go their way this weekend.

Hinckley’s away day blues continued last weekend. George Chuter’s side fell to a disappointing defeat against Macclesfield and their form on the road has once again hampered their push for a top two spot. The Hornets are now six points behind second placed Chester, but back on their home turf, Hinckley will fancy their chances of maintaining their impressive run of results at Leicester Road.

The Midlands club have won all seven of their matches on their own patch so local rivals Leicester Lions will be aware of the challenge that faces them in Round 14. Andy Key’s side will take the 10-mile trip to Hinckley in good spirits as an excellent victory over Peterborough Lions moved them out of the bottom three last weekend. Leicester are two points clear of the drop, as things stand, so a second away win of the term would begin to put daylight between themselves and the relegation places.

Otley are certainly making strides this season. A first five-try haul since January saw them return to winning ways last week as they beat Stourbridge at Cross Green and it is now five victories from their last six games. The Yorkshire outfit sit seventh in the table and they are enjoying their best season for a number of years while in contrast, South Leicester are struggling this term.

South come into this clash with Otley in the relegation places after suffering a heavy defeat against Sedgley Park in Round 13 and it is now one win from their last eight games for the Midlands side. However, that aforementioned victory did come a couple of weeks ago against promotion chasing Huddersfield at Welford Road so South will be hoping for another similar display as they aim to move out of trouble.

Tynedale are absolutely flying. Ben Woods’ side had picked up just two wins from their first eight games, but since the beginning of November, the North-East side seem to have sparked into life. Four victories from their last five matches against Preston Grasshoppers, Macclesfield, Leicester Lions and Sheffield Tigers has seen Tyne surge out of the relegation battle and into the top half of National Two North.

They will be eager to continue their excellent recent form when they travel to Wharfedale in Round 14 while the hosts will be desperate to taste that winning feeling once again. Rob Baldwin’s side are currently going through a bit of a lull as we approach the halfway mark in the campaign as three straight defeats as just knocked the wind out of their sails. Dale are still having a pleasing season after fending off relegation for the last couple of years, but a welcome victory would certainly be an early Christmas present for the 10th placed side as they look to spark their campaign back into life.

Preston Grasshoppers’ win over Hull Ionians was arguably the standout result across the National Leagues last weekend. Paul Arnold’s side delivered a superb display to topple the National Two North league leaders and with that, the Hoppers maintained their excellent form at Lightfoot Green to move up to ninth the division. The Lancashire club returned to this level at the beginning of the season and they are certainly enjoying themselves at present, but they will be keen to improve on their away form when they visit Stourbridge in Round 14.

Preston have lost all seven of their fixtures on their travels thus far, but they face a Stour side which has struggled for consistency throughout the campaign. After an excellent win over Sedgley Park in Round 12, Neil Mitchell’s side lost to Otley last week which means they are now 12h in the table following one win from their last five games. After finishing third last term, this has been a really tough season so far for Stour so a much-needed win at Stourton Park would certainly boost morale.

Sheffield Tigers would have been disappointed with their performance against Tynedale in Round 13. Their club website claimed the Tigers ‘lacked an edge’ as their three game unbeaten run came to an end at Dore Moor. Jamie Broadley’s side had a very successful November, but couldn’t continue their form into this month so they will be keen for an immediate reaction this weekend.

The Yorkshire may fancy their chances of returning to winning ways at the first time of asking as Peterborough Lions currently sit bottom of National Two North. A defeat to rivals Leicester Lions last week means they are now 15 points adrift of safety with chairman Andy Moore admitting his side are running out of time for things to start clicking. The Lions are back at Bretton Woods this weekend and in their last home game, they did pick up an excellent win over Macclesfield so they will be keen for another repeat performance as they try to engineer a revival.