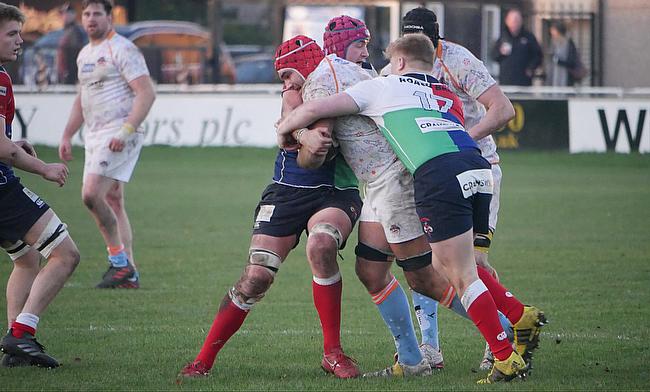 Hull Ionians recovered to secure a victory over Sedgley Park as they further cemented their position at the submit of National Two North.

The I’s had trailed by 10 points against Sedge, but an improved second half performance enabled the Yorkshire club to secure their seventh victory on the spin.

The men from Brantingham Park remain four points clear at the top after Chester’s dramatic win over Wharfedale while Huddersfield were also able to stay touch with the leaders after a victory against Stourbridge.

Meanwhile, Hinckley’s promotion ambitions suffered a dent as they were beaten by Otley and Fylde comfortably saw off South Leicester at Woodlands.

Elsewhere, Preston Grasshoppers are up to 11th in the league standings after triumphing over Peterborough Lions and Tynedale secured a potentially crucial victory over Macclesfield while it ended all square between Leicester Lions and Sheffield Tigers.

Sedge were 24-14 up at the break, but Sam Wilson’s try immediately after half-time sparked a reaction from the I’s.

Matt Riley did touch down to extend Sedge’s lead, only for Wilson to grab his third score of the day.

Hull then went in front for the first time in this contest as Ed Falkingham dotted down and from there, the visitors never relinquished their lead as they secured their seventh victory in a row.

The hosts would have been frustrated by the outcome, especially after an excellent first 40 which saw Riley, James Lloyd and Steve Collins all touch down while Ben Bell scored Hull’s other try of the afternoon.

Jan Van Deventer’s side are still four points behind leaders Hull Ionians, but they were made to work hard to maintain their unbeaten home record.

Tries from Sean Green, Joshua Woods and Shay Owen helped Chester to a 21-8 lead, with Rhys Lovegrove crossing for the visitors.

However, Dan Stockdale, Phil Woodhead and Jack Blakeney-Edwards all crossed to put Dale 25-21 ahead, but Ford’s converted try on 76 minutes stole the victory for Chester.

Huddersfield survived a late recovery from Stourbridge to seal a hard-fought win at Lockwood Park.

Tries by Thomas Hodson and Lewis Bradley, as well as a penalty from the returning Chris Johnson, proved to be enough for Huddersfield as they claimed their eighth win from their last nine matches.

All of Stour’s points came in the final 10 minutes as Mark Harrison went over for a converted score while Rickie Aley slotted a penalty, but it was too little too late for the Midlands side.

Otley’s excellent form continued as they secured their fourth win on the spin by beating Hinckley at Cross Green.

The Yorkshire outfit are now up to fifth place in the table while defeat for Hinckley leaves them seven points behind the top two.

.@OtleyRugby were deserved winners in round 11 of @nat2rugbynorth on Saturday – Hinckley’s tries were from Hough and Turner with 2 conversions from @Mr_Joe_Wilson taking him 1 point ahead of @Lordy1607 on the all time points scoring list (423 – 422) pic.twitter.com/G4a7ienDhj

Tries from Joe Graham and Stephen Nolson helped Otley to a 17-7 lead at the break with Joe Wilson responding.

Graham and Benjamin Magee added two more for Otley in the second period while Gareth Turner’s reply was not enough for Hinckley.

Fylde moved up to sixth in the National Two North standings thanks to an impressive bonus-point win over South Leicester.

The hosts scored four of their six tries in the first half as Sam Dugdale, Henry Hadfield, Tom Carleton and Thomas Grimes all crossed to give Fylde a 28-8 lead at the interval.

Warren Spragg’s side stayed in control after the break and scores from Fergus Warr and Chris Briers wrapped up a second win on the bounce for the Lancashire club.

South scored three tries via Michael Ogunwole, William Ward and Javiah Pohe on another tough afternoon for the Midlands club as they slipped to a sixth defeat in a row.

Preston Grasshoppers secured their third home victory on the spin as they easily beat Peterborough Lions.

The Hoppers, who secured their promotion into National Two North in April, are also 11 points clear of the relegation zone thanks to their excellent results at Lightfoot Green.

Rouban Birch, Tyler Spence, Matt Lamprey and Alexander Ward all crossed for Preston who led this contest 22-0 at the break.

A second half try from Nico Deffo prevented a scoreless afternoon for Peterborough Lions, but they now sit 14 points from safety at the foot of the division.

Sheffield Tigers let a 10-point lead slip and had a player sent-off as Leicester Lions fought back for a draw at TMDP Park.

The visitors led 18-8 just after the hour thanks to tries from Rob Davidson, Lee Monks and Henri Packard, while Alex Wilcockson touched down for the Lions.

The Lions hit back with Wilcockson’s second try and the decisive moment in the contest came on 75 minutes as Sheffield Tigers’ Joseph Duffy was red-carded for foul play.

With the man advantage, Leicester Lions were able to grab a share of the spoils as Laurence Warren-West touched down late on, but the hosts did miss the chance to snatch the win as the resulting conversion sailed wide.

Tynedale clinched their first away victory of the campaign as they beat Macclesfield in convincing fashion.

A brace from Morgan Passman put Tyne two tries ahead before Sam Broster reduced the arrears as Macc trailed 14-5 at the break.

Passman completed his hat-trick following the restart while Joe Mills, Guy Pike and Rory Dixon also crossed to wrap up the victory for Ben Woods’ side, which moves them eight points clear of trouble.

A try and a penalty from Thomas Morton was all Macclesfield could manage and the Blues are now 11 points from safety.