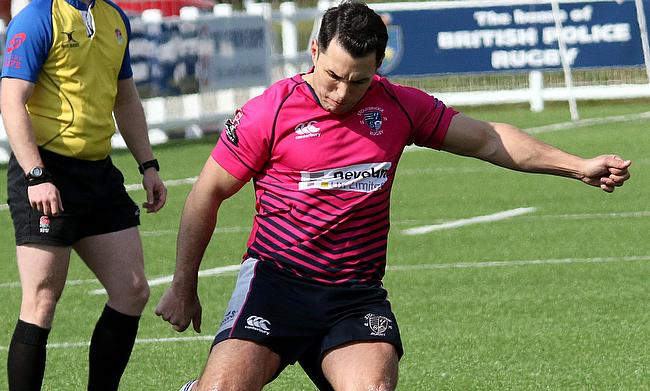 Chris Scott insists Stourbridge are determined to improve on their away record in their final two fixtures of the campaign.(Photo Credit: Ceri Davies)

The fly-half is confident Stour can finish with a flourish after picking up just two wins on their travels this season against relegated Peterborough Lions and South Leicester, respectively.

In contrast, Neil Mitchell’s side have won 11 times at home this term and Scott feels Stour’s patchy form is down to the mindset of the players.

“I genuinely think it is a mentality thing,” he said. “I think it’s just down to us players as a whole. I don’t think it is something coaches and management can push on you.

“We have fantastic facilities at Stourbridge with our 4G pitch. It is brilliant and the lads absolutely love that pitch. I don’t think it is as easy as saying we only like playing on a plastic pitch, but I do think it is down to us as individuals.

The Midlands club round off the season with two matches on the road against Leicester Lions, but first up this weekend, they travel to Yorkshire to face Wharfedale

Stour sit 10th in the table and three points clear of Dale and Scott is hoping his side can prove a point at the Avenue on Saturday.

He added: “We have got two games to go. We had a cracking finish last weekend in terms of our last home game against Macclesfield.

“I think we want to carry that over and prove to ourselves that we don’t just play well at home with a crowd behind us on a nice pitch.

“I have been up to Wharfedale a few times in some horrendous conditions! We know it is going to be warm and sunny this weekend so we have got no excuses.

“We want to prove to ourselves that we can get past this mental thing of playing away.”

After finishing in the top four of National Two North last term, Stour’s inconsistency – combined with a host of injuries – has plagued their progress this year.

However, Scott has certainly been one of the standout performers for Stourbridge since gaining a regular starting berth in the second half of the season.

Following their 48-22 win over Macclesfield last weekend, Scott received the Director’s Player of the Year from Neil Mitchell whilst teammate Dan Rundle grabbed the headlines once again.

The winger ran in another hat-trick, taking his tally to seven tries from his last three games, and Scott feels Rundle has been key to an impressive attack which has racked up over 800 points this season.

“He [Rundle] is a good lad,” Scott said. “His pace is up there and he has to be one of the quickest lads in the league! He has scored quite a few hat-tricks now as well!

“He comes in off the wing and is a natural finisher. If someone makes a line break, he is there screaming for it and all I can hear is Dan Rundle’s voice! He constantly wants the ball which is fantastic and that is what you want off your winger.”

Rundle has been integral to Stourbridge’s recent ruthless streak. They have scored 142 points in their last three matches and the Midlands club will carry that confidence into their clash with Wharfedale on Easter Saturday.

The original fixture has been postponed twice this term, but it will be third time lucky this weekend and despite both clubs sitting comfortably in mid-table, Scott is motivated to get a result as Stour go in search of only a third win on the road.

He said: “They will sort of be in a similar position to us. They are not going down and both teams will stick to what they know best I think.

“They like to grind out results, but it will be dry so it will be a different sort of game to the majority I have played there before.

“These games can be difficult to get up for. Neither team has got anything to play for with no relegation or promotion so it is all about the mindset. If you go out with the right mindset from the start, I think that’s the team that will come out on top.”

Scott was also keen to stress Stourbridge are eager to end a mixed season on a high, but as we come to the conclusion of this term, the fly-half does believe the Midlands outfit can once again challenge towards the top end of the division next year.

“The season isn’t over and we have got two games to go so it is about concentrating on that first,” Scott added.

“However, you have always got to have a goal to be right up there in the mix. The one thing I have liked about Stourbridge is that they are always wanting to push for promotion.

“You hear some stories from some teams that don’t want to go up because they won’t be able to cope in the league above, but I certainly don’t think Stourbridge is like that.

“Stourbridge wants to go up. It’s got the facilities, the management and it is such a well-run club. I have been very impressed in the four years I have been here.

“Even if they don’t go up next year or the year after, I certainly think Stourbridge have the backroom staff and everything else to go with it so I genuinely think we will be looking to be in that top three next year without a shadow of a doubt.”