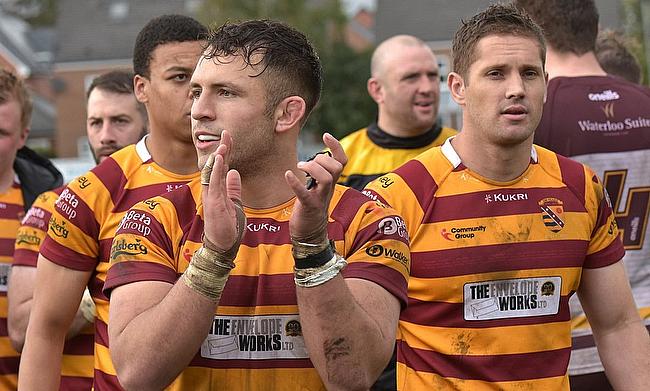 Connor Wilkinson believes Fylde’s experiences in both National One and National Two North have only helped the team improve. Photo Credit: (Chris Farrow)

Warren Spragg’s side ended last term in sixth place, but heading into the final month of the campaign, the Lancashire club were in the race for a top two finish.

The men from Woodlands eventually fell away from the promotion picture, but they have not dwelled on that disappointment as Fylde currently sit four points clear at the top of National Two North having won seven of their eight games so far.

Wilkinson feels the lessons they have learnt from last season, and from their time in National One during 2017/18, have strengthened the mentality of the Fylde squad as they aim for a return to the third tier.

“We are pretty pleased and we are on a good run,” said the Fylde back. “We are playing some good stuff and we are enjoying our rugby at the moment.

“Last year, we started pretty well but we fell at the last hurdle a little bit. I think we went to Hull Ionians when we were top of the league and lost and that started a losing streak for us. After last year, I think we have got tighter as a unit and tighter as a group of players.

“Three years ago when we were in National One, we all felt quite terrible after losing a load of games and we were getting used to losing which didn’t feel nice. I think that probably spurred us on last year and even more so this year so if we can continue to keep getting the good results, winning becomes a habit you want!”

Wilkinson, who has been one of Fylde’s standout performers this term, starred again in Round Eight as he ran in two tries to help his side secure a 42-17 win at Chester.

Despite the convincing nature of the scoreline and the fact Fylde were able to move to the top of the table last weekend, Director of Rugby Warren Spragg was keen to stress the need to improve following the full-time whistle.

Spragg has been in charge of Fylde for just over two-and-half-years and in that time, he has built a young squad which is continuing to learn.

“It wasn’t our best game on Saturday,” Wilkinson said. “We weren’t firing on all cylinders, but you know what Spraggy is like – he is never happy! Seriously though, there are always things to improve on and tighten in training so we can always get better.

“It is a very young squad, but I do think we have experience now. We’ve had that spell in National One under Warren and we’ve had a year in National Two North. Yes, we didn’t get the results we wanted but right now, it is showing we are growing as a unit and growing as a team.

It's #Fylde 42 @RUFCChester 17: match report at https://t.co/RsJ0gMI473@spraggio "Scores are good, results are good but If we hold ourselves responsible for our expected standards then we’re not where we need to be at the moment." pic.twitter.com/jMawT42h1q

“I don’t think we are a young team anymore. We might be young in terms of age, but as for experience, I think we are quite mature for our ages across the board. It is an exciting time to be involved with the club and I can’t wait for the next few games.”

Wilkinson, who is also involved with the excellent rugby programme at Manchester Met University, will be travelling to the Wirral this weekend as Fylde prepare to take on Caldy in a top of the table clash.

Fylde leapfrogged their promotion rivals last weekend as Caldy’s fixture with third-placed Sedgley Park was postponed so the hosts will be keen to wrestle back pole position.

Caldy have won all seven of their fixtures thus far and they also did the double over Fylde back in 2017 when the two sides last met in National One.

Both clubs are also the only two teams across the National Leagues yet to taste defeat this season and Wilkinson admits a positive result at Paton Field on Saturday would be a signal of his side’s intent.

He added: “Definitely. We know Caldy is a hard place to go and get a result and they put up a good fight.

“Two years ago, Caldy came to us and they gave us an absolute thumping [34-9] so it would be a great result if we are able to get the win, but Caldy have got some amazing players across the pitch so it is going to be an interesting one. It should be a good game to watch and play in!

“We are not thinking about that [unbeaten records]. We are just taking every game as it comes week in, week out. Put an opposition in front of us and we play to win that game. We don’t really look too far ahead and it is all about us just playing our game to try and get a good result.”