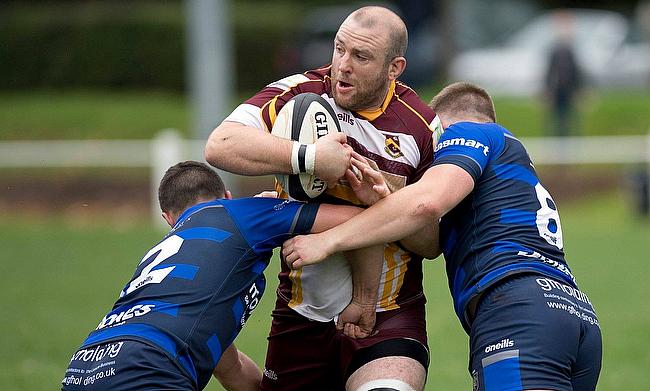 Nick Sharpe says Huddersfield have even surprised themselves after making a flying start to the National Two North season. Photo Credit: Ray Morris

Field have continued to build on a very successful 2017/18 campaign and Gareth Lewis’s side currently sit second in table as we approach the third-way point of the term.

Huddersfield began the season with back to back defeats, but as they head into Round 10 this weekend, the men from Lockwood Park are on a seven-game winning run.

National Two North – Round Nine Review: Super Seven for @Huddersfield_RU as they move into the top two. #Nat2n

“To win seven on the bounce is pretty good, but it could’ve been potentially better,” Sharpe told ncarugby.com

“We feel we could’ve got a lot more out of the first two games. We lost with the last kick of the game against Otley and when we played Sedgley [Park], we gave them a couple of soft tries so it could have been better.

“Last year and this year, the expectation has honestly been to stay up. Historically, we have gone up and down.

“We are a community club and we don’t throw money around like some places do so we are fairly realistic in our optimism that we want to be at this level and we don’t want to go down.

“It did surprise us last year and even more this year because we thought the league looked really tough. Some stalwart National League teams came down and some good teams came up so we are certainly outperforming where we thought we would be.”

Key to Huddersfield’s excellent campaign has been their defence. The Yorkshire outfit have conceded the second lowest amount of points in the division (157) which is an average of just over 17 points a game.

“We’re defending really well and it feels great to be a part of that,” added Sharpe, who has plied his trade for Huddersfield for practically all of his rugby career.

“You don’t feel exposed very often and that is more important than the attack sometimes. You can win a game by a point and that’s fine, but if you are leaking tries left, right and centre, you are never going to win much.

“Gaz [Gareth Lewis] leads that area and I know it is important to him and that certainly comes through within the squad which is great.”

Huddersfield’s defensive qualities were on display in Round Nine as they beat Hinckley 48-3 to move into the top two of National Two North.

After overcoming one of their fellow early season promotion candidates last week, Field now face a tough test against league leaders Hull Ionians in Round 10.

The I’s are currently four points clear of Huddersfield ahead of Saturday’s clash at Brantingham Park and Sharpe admits getting a result in this Yorkshire derby would be a statement from his side.

He added: “We did perform well [against Hinckley] and they were probably a bit below-par because they are generally pretty good.

“It would be a great statement to get that result, however, we know it is a long season so we won’t be getting too excited if we do manage to get a win on Saturday.”

Whatever the result in East Riding this weekend, Sharpe also believes Huddersfield need to reconsider their aims for this season after a scintillating start to the campaign.

Sharpe concluded: “We probably do need to reassess it a little bit. I think we certainly want to better our sixth place from last year which is the best we have ever done, but the longer it goes on, you do have to recalibrate those ambitions.

“Saying that, you have got to keep the squad from getting too excited. If we lose, we could be fourth on Saturday so there are two sides to that coin.

“As cliché as it is, we just want to get the result on Saturday before starting again.”