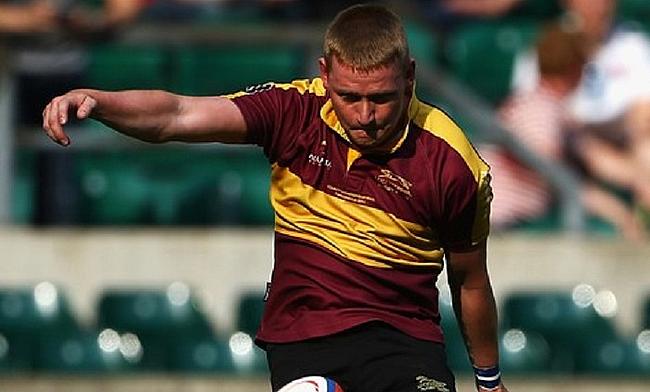 Stourbridge’s new recruit Rickie Aley believes the club’s ambition is one of the main reasons why he has joined the Midlands side.

The fly-half has shone over the last couple of years in National Two North and he has now swapped South Leicester for Stour.

And Aley, who was the highest points scorer in the division last season, insists it felt like the right time in his career to join a club which has high aims.

“There were two reasons really,” he said. “I moved to Worcestershire with my wife two years ago so I wanted to be a little bit closer to home and the other reason is the direction Stourbridge want to go in.

“They want to get promoted this year, hopefully. They want to push on. At South Leicester, it was just staying the same. We were stuck in mid-table. I will be 28 by the time the start of the season comes around so I just wanted to push on.”

Aley has been on Stour’s radar for a while and he did turn down a move to Stourton Park on a couple of occasions, but now Director of Rugby Neil Mitchell has finally got his man ahead of the new term.

“He tried very hard to get me last season, but I was getting married,” Aley added. “My job and my rugby with South Leicester was all tied in together so I couldn’t really move clubs without having the security of a new job.

“Part of me bottled it a little bit because I was so used to playing with a group of friends at South Leicester, but mostly, it was down to me having a change of heart in the last minute. I am grateful to Neil for coming back in for me this summer.”

Stour is now the next stage in Aley’s career, but the 27-year-old has been on a journey with South Leicester.

He was part of the side that won promotion to National Two North in 2015 and the club has now stabilised themselves in the fourth tier of English rugby so despite Aley looking forward to getting started at Stourbridge, he admits it was difficult to leave his friends and team-mates behind.

He said: “It was massively tough. It was horrible really because I have grown really close to a lot of the lads there and I think there was four of us in the squad that had been with South since the days of National Three.

“To finally get promoted to National Two and spend a few years with them in that division was brilliant, but there comes a time where everyone has to move on I suppose.”

Aley’s own personal form is one of the factors behind South Leicester managing to establish themselves in National Two North. The fly-half has been imperious with the boot over the last couple of seasons and over that period of time, he has kicked 632 points.

After moving away from Leicester Tigers’ academy earlier in his career, Aley experienced injuries and other problems which made him doubt whether or not he would ever play at a high level.

However, his performances have presented him with a chance at Stourbridge, who finished third last season, and Aley is hoping he can continue his excellent form.

He added: “To have two good seasons with South and then have a club like Stourbridge come in for me, it shocked me at first because I never thought I would play at a higher level again.

“A lot of it comes down to confidence. I am a confidence player. If I am feeling good about myself, I feel like I can kick everything on my day.

“I think being captain for the last few seasons has given me that bit of confidence as well because people look up to you and you have got that bit more responsibility, but once you starting hitting a few and putting the hours in in training, then it does help boost that belief.”

Stourbridge begun pre-season training this week and they are gearing up for their opening day fixture at home to Leicester Lions on the first weekend in September.

Stour flirted with promotion last term and Aley has revealed that a top two finish is once again the aim for the Midlands club this season as he prepares for the start of a new phase in his career.

“I am a really excited, he said. “It has given me that bit of a buzz back for rugby to try and push on.

“From a club perspective, Neil has already set his goals out that he wants promotion this year whether it is going up as champions or through the play-offs.

“From my personal point of you, I just need to get my head down, work hard in training and earn the respect of a new bunch of teammates and hopefully I can then perform to help Stourbridge get the results.”