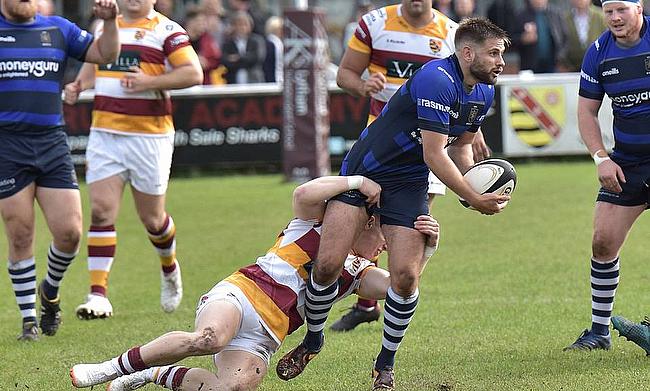 Hull Ionians strengthened their promotion ambitions with an excellent victory over title rivals Huddersfield in Round 24.

Martyn Wood’s men remain five points clear at the summit, but Chester have moved back into second-placed following their convincing win over South Leicester.

Fellow promotion contenders Fylde are up to third after hammering Stourbridge while the aforementioned Huddersfield are now fourth, but they do have a game in hand.

Otley are also in the frame for a top two finish as their latest win over Peterborough Lions means they are only six points behind Chester as things stand.

Sticking with Peterborough Lions, their stay in National Two North is almost over following their loss to Otley, but relegation rivals Macclesfield have kept their hopes of avoiding the drop alive.

Marshall Gadd’s men produced a brilliant response to defeat Sheffield Tigers and the Blues are now 15 points from safety with six matches left in the season.

Elsewhere in National Two North, Sedgley Park secured a good win over Hinckley, Preston Grasshoppers made it four victories in a row against Tynedale and Leicester Lions defeated Wharfedale.

Hull Ionains’ hopes of making an immediate return to National One were enhanced as they beat promotion rivals Huddersfield at Lockwood Park.

Toni Kuku’s early score was cancelled out by a Harry Whitfield try before Callum Smith’s effort gave the visitors a half-time lead.

Read the match report from Saturday’s top of the table clash with @Ioniansrufc here>>https://t.co/Pfl6uWV1s0 pic.twitter.com/ly8DescwL2

Ed Falkingham powered over just before the hour to make it 17-7 before Lewis Minikin landed a penalty.

Thomas Owen’s try cut the deficit to eight points, but Steve Slingsby’s effort on 74 minutes ultimately sealed the win for the I’s.

Whitfield’s second late on was a consolation for the home side and now Hull remain five points clear at the summit while Huddersfield are down to fourth and sit five points behind second-placed Chester.

Chester moved back into the top two of National Two North as they eased to a win over a relegation-threatened South Leicester outfit.

Owen completed his hat-trick in the second half, while Matt Van Sertima grabbed a brace and Josh Morris also got in the act as Chester ran riot.

Timo Koster and Myles Bean scored tries for South, who are 11 points adrift of safety with six games to go.

Fylde are just two points behind the top two as they scored eight tries to thrash Stourbridge at Woodlands.

Tom Carleton, Ben O’Ryan and Cam Crampton all crossed in the first period as the hosts led 21-5 at the break, with Hal Riley going over for Stour.

Gus Warr got the ball rolling in the second half for Fylde and the home side then scored a superb length of the field try which was finished off by Sam Dugdale.

Tom Grimes and Connor Wilkinson scored tries number six and seven for Fylde and despite James Seabrook dotting down for Stour, the home side deservedly had the final say as Carleton grabbed his second.

Peterborough Lions’ slim hopes of staying up have been all but distinguished after an impressive Otley brushed them aside in Round 24.

Tom de Glanville’s early score was the worst possible start for the Lions before Josh Hall, Jack Mackie, Ben Magee and Joe Rowntree all crossed to give Otley a 35-0 half-time.

Jack Lewis got the visitors on the board on 47 minutes, but no further scores were added as the Lions fell to their 19th loss of the campaign.

The men from Bretton Woods are 25 points from safety with six games left to play while Otley are still in the mix for a top two finish after this latest win.

Richard Lepori’s brace of tries earned Sedgley Park a bonus-point win over Hinckley as their strong finish to the season continues.

The winger touched down in the first half, which also included scores for Sam Lowthion and Danny Maher.

Ben Pointon went over for Hinckley as the visitors trailed 17-7 at the break and Joe Wilson’s penalty kept the away side in touch.

However, Lepori’s second as well as a further try from Bob Birtwell completed the win for Matt Bebbington’s side.

An in-form Preston Grasshoppers side have moved up to seventh place in National Two North after seeing off Tynedale at Lightfoot Green.

Davidson added the conversion and pinged over a drop-goal before James Fitzpatrick dotted down with 10 minutes to go for Hoppers.

Tynedale replacement Gareth Black scored a consolation try for the visitors, but Preston had done enough to seal their fourth win on the bounce.

Leicester Lions have all but secured their position in National Two North for next season following an excellent win over Wharfedale.

Devon Constant and Alex Wilcockson were brilliant for Andy Key’s side as both backs scored twice in the second-half.

Ed Sumpter, Alex Smit and Sam Benjamin went over for the Lions in the first period, while Josh Burridge and Ralph Wellock replied for Dale after the interval.

After hovering above the bottom three at stages this term, the Lions are now 20 points clear of danger with six games remaining.

Macclesfield came from 17-0 down to beat Sheffield Tigers and keep their hopes of avoiding relegation alive.

Lewis Bloor and Greg Mellor both went over for the Tigers and a penalty from Mark Ireland put the visitors in control.

However, back came Macc. Tries from Sam Moss and Josh Redfern meant the hosts trailed by three points at half-time and the Blues were excellent in the second 40.

Sam Broster, Sam Stelmaszek and Tom Mantell all crossed after the break to secure a much-needed win for the Cheshire side, who are now 15 points from safety with six matches to go in the season.