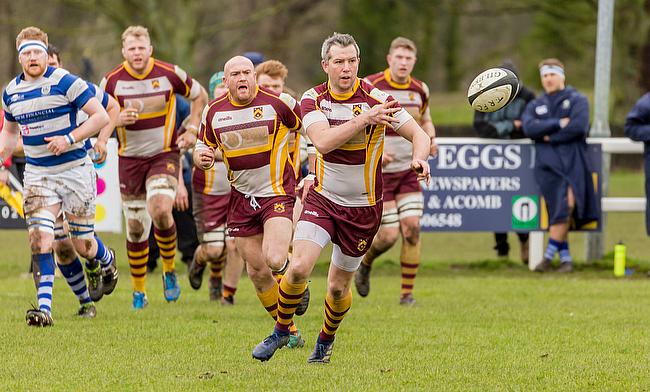 Chris Johnson kicked five penalties in a fine individual performance as he guided Huddersfield to a vital win against Tynedale.

After Wharfedale’s fixture with Stourbridge was postponed due to the bad weather, Field’s clash with Tyne was the only game which took place on the weekend and the visitors came out on top.

Victory for Huddersfield has reignited their top two hopes and with just five games remaining in the campaign, we have also taken a look at the promotion races and relegation battles from across all three divisions.

Huddersfield sparked their promotion bid back into life as a late penalty from the outstanding Chris Johnson helped them snatch a victory against Tynedale.

Two penalties either side of half-time from Johnson gave Field a 6-0 advantage in very difficult weather conditions at Corbridge.

However, the drama unfolded in the final 10 minutes. Liam Carmichael scored the first try of the game for Tyne, but the hosts were immediately pegged back after two more kicks from Johnson.

Tyne, who hadn’t lost at home since September, thought they had done enough to extend their 10-match unbeaten run when Cameron Nordli-Kelemeti dotted down.

But there was to be one final twist as deep into added-time, Johnson was presented with a chance to steal the win for Field and the fly-half kept his nerve to convert his fifth penalty of the afternoon.

Victory for Gareth Lewis’ side leaves them in fourth position and six points behind second-placed Chester while Tynedale’s losing bonus- point means they are up to seventh in the league standings.

Last time out in National One, Ampthill and District moved to the top of the division after beating title rivals Old Elthamians and with five games to go, the A’s are in the driving seat.

The next two weeks for Mark Lavery and Paul Turner’s side could be crucial. This Saturday, they travel to sixth placed Darlington Mowden Park before taking on fellow promotion candidates Rosslyn Park. If they navigate their way through those fixtures, their final three matches come against sides currently in the bottom six so Ampthill will be keen to end March in a positive manner.

Second-placed Old Elthamians will be hoping Ampthill can slip-up, especially against Rosslyn Park. OEs are now five points off the top, but Gavin Lach’s side have a ‘favourable’ run-in. Four of their last five matches come against teams in the bottom half, while in their final game, they face Rotherham Titans at College Meadow. OEs are more than capable of picking up five straight wins, but will it be enough?

Rosslyn Park (3rd) are level on points with OEs and similarly to Ampthill, the next couple of weeks could be vital. If Kieran Power’s side are to pick up maximum points against Plymouth Albion on Saturday and then Ampthill, it would leave them in a very strong position heading into April. Like their rivals, their remaining fixtures in the final month of the season do come against teams in the bottom eight, but if Park falter in March, it could end their promotion ambitions.

Blackheath, who sit in fourth place, are eight points off the top so they could also make a late surge for the title.

It’s getting tight at the wrong end of National One and with a cluster of teams still not safe, we have decided to highlight the remaining fixtures for the clubs battling to avoid the drop:

So, the fixtures highlighted in bold signify games in which two sides fighting for survival take on one another. With this mind, the final five matches for bottom of the table Esher are crucial while both Caldy and Loughborough Students face extremely difficult run-ins.

With just five games in the season remaining, the race for a top two finish in National Two North is intensifying. After Huddersfield ended a three-match losing run on the weekend, they are still very much in the hunt and looking at their remaining fixtures, their victory over Tynedale could prove pivotal.

Field still have to face rivals Chester and Fylde before the end of the campaign and they conclude the term with a tricky trip to a rejuvenated Sedgley Park so you can argue Gareth Lewis’ men have their fate in their own hands.

As for the aforementioned Chester, they have a huge clash with Fylde this coming weekend at Woodlands before hosting Huddersfield. Jan van Deventer’s side also have to play Otley, Sedgley Park and Preston Grasshoppers so it is far from a straightforward end to the season for the Cheshire outfit.

In terms of Fylde, the third-placed side have to play their rivals as well as Wharfedale, Sedgley Park and Otley so similarly to Chester, Warren Spragg and his squad also have a tough final block of fixtures.

With this in mind, league leaders Hull Ionians will be pleased to see the teams directly below them fighting it out against each other. The I’s are one-point clear at the summit and take on an in-form Otley this coming Saturday and after that, three of the final four matches are against teams in the bottom half. Their run-in looks the ‘easiest’ on paper, but this enthralling promotion battle is bound to have one or two more surprises in store.

Don’t rule out Otley (5th) and Sedgley Park (6th), either. Both sides can have a huge say in the race for a top two spot because they still have to play the teams above them.

With Peterborough Lions already down, time seems to be running out for both Macclesfield and South Leicester. Macc are 19 points from safety and if rivals Sheffield Tigers better the Blues’ result in Round 26, the Cheshire club will be relegated.

The men from Priory Park face Peterborough Lions this Saturday, but their run-in also includes fixtures against Hinckley, Hull Ionians and Stourbridge so Macc do face a very difficult task if they are to stay up.

Macclesfield’s last game of the season is against South Leicester, but by that point, both teams could be down. South will be hoping that isn’t the case and after facing the top three sides in recent weeks, it doesn’t get any easier for the Midlands club.

They currently sit 15 points from safety, but Huddersfield, Sedgley Park and Otley lie in wait for South and with Preston Grasshoppers also being their penultimate fixture, the odds do seem to be stacked against them.

The battle for the title in National Two South has really been a one-horse race throughout the campaign. Rams RFC have won 23 of their 25 games this term and they currently sit 12 points clear at the summit with five games left to play.

Seb Reynolds’ side require a minimum of 14 points from their final five games to clinch the title and a top two finish can be confirmed if they can conclude March with two bonus-point wins against Worthing Raiders and Redruth.

With the Rams on the verge of the league title, the battle for the play-off spot continues. Second-placed Canterbury sit four points clear of closest rivals Henley Hawks and the two sides collide this coming weekend in one of the biggest games of the season.

If Canterbury can clinch victory in Round 26, it would leave them in a very strong position to finish in the top two with games against Old Albanian, Bury St Edmunds and Barnes to come before they end the season against Rams.

But, if Henley Hawks can get the better of Canterbury this weekend, Nigel Dudding’s side will move into second place with four matches to go. The Hawks then face two sides currently in the bottom three before taking on Old Albanian and Bury St Edmunds.

We need to speak to @nca_rugby, surely it should be televised? ??

Fourth-placed Tonbridge Juddians are still in the picture. Despite a wonderful run of one defeat in their last 17 games, Peter Dankert’s men are seven points behind Canterbury. TJs have a tricky fixture against Taunton Titans (5th) this weekend and with Canterbury facing Henley, it could be an opportunity to close in on second place. Following on from this Saturday, the Kent outfit take on Worthing Raiders, Redruth, Clifton and Birmingham & Solihull so Round 26 could be pivotal for TJs.

It is looking very tough for the sides currently in the relegation places to save themselves from the drop. Bottom of the table London Irish Wild Geese are 15 points from safety as things stand, but they can reignite their survival hopes this weekend.

Eddie Fraher’s side face rivals Guernsey (15th) and a strong showing at Hazelwood could be the spark they need. Following on from Round 26, Wild Geese do have difficult games against Henley, Old Albanian and Bury St Edmunds before concluding the campaign against Barnes so this Saturday may well be season-defining.

That could also be the case for Guernsey. The Raiders will be targeting the final two weeks in March if they stand any chance of avoiding an immediate relegation to the fifth tier. As mentioned, Jordan Reynolds’ side face Wild Geese this Saturday and if they come away with a victory, Guernsey end the month against Dings Crusaders, who sit just above the drop zone. Could back to back wins really ignite a revival for Guernsey who are 14 points from safety?

Birmingham and Solihull are the final side who occupy a spot in the bottom three. The Bees had a five-point deduction at the start of the season, but they currently sit nine points shy of safety with five games to go. Pete Glackin’s men have to face four sides in the top half of the division in their final five matches so it will be a tough ask for the Midlands club to escape the relegation places, but never say never…