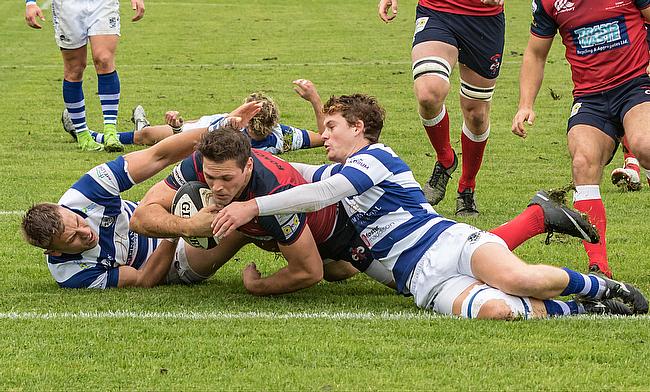 Hull Ionians and Leicester Lions snatched late wins in Round Eight in National Two North as both sides continued their fine form in October.

The I’s remain on top of the division following their narrow triumph over Chester while Leicester Lions secured their third victory on the bounce after beginning the season with five straight defeats.

Second placed Hinckley defeated Fylde to stay on the coattails of Hull Ionians while Huddersfield added to their excellent run of results against Peterborough Lions.

Elsewhere in National Two North, Tynedale edged past Sedgley Park and Stourbridge beat South Leicester in a 102-point thriller while Wharfedale defeated Macclesfield and Otley came away from Sheffield Tigers with a victory.

Lewis Minikin kept his nerve to kick Hull Ionians to a fourth consecutive victory against Chester in a compelling National One clash at Brantingham Park.

The hosts led 10-3 at half-time after tries from James Newman and Adam Thomas wiped out James Robins’ early penalty.

Neither team deserved to lose that, great game of rugby. Nerves of steel at the death @Lewgineee #uptheis

Kuku and Baston once again exchanged tries in a frantic final 10 minutes as Chester maintained their two-point advantage, but the I’s snatched the victory as Minikin landed a late penalty.

Hinckley ground their way to a victory over Fylde after the away side had been reduced to 14-men following a sending off.

The hosts, who lost their first game of the season last weekend, led 6-5 at half-time as the boot of Joe Wilson cancelled out Christian Joyner’s try for Fylde.

But the turning point in the game occurred shortly after the interval as Henry Hadfield was shown a red-card for foul play and Hinckley took full advantage of their extra man.

Jack Dickinson scored immediately after Hadfield’s dismissal and the Midlands club sealed the win following a third penalty from Wilson.

Huddersfield have moved up to third in National Two North after securing their sixth victory in a row by beating Peterborough Lions.

Field are now just two points outside the promotion places as Gareth Lewis’s men continued their fine form in Round Eight.

The visitors were ahead at half-time after tries from Arthur Wilkinson (2) and Elliot Knight, while Peterborough Lions responded through Suva Maasi and Thomas Lewis.

But, Harry Whitfield, James Davies and Adam Blades touched down for unanswered tries after the interval to seal yet another win for Huddersfield.

A late try from Chris Wearmouth saw Tynedale beat Sedgley Park to win just their second match of the campaign.

Tyne took the lead through full-back Robert Parker and the north-east side did the same during the second half as Joe Mills crashed over, but the hosts were four points down before Wearmouth’s score two minutes from time.

Sedge’s tries through Max Ashcroft, Matt Riley and Nathan Ruston proved only enough for a losing bonus-point for the away side.

Stourbridge are up to sixth place in National Two North following a high-scoring victory against fellow Midlands side South Leicester.

Stour were scintillating in the first half as they scored six tries to lead 40-7 at the break as Joe Heatley, Mark Harrison, Rickie Aley, Jack Lea, Nicholas Cairns and Mark George all crossed.

South’s try came via Thomas Cheney, but they fell further behind soon after the restart as Dan Rundle darted over.

Joseph Jones and Nigel Mukarati then swapped scores before South dominated the final quarter as they ran in five tries,

Javiah Pohe, Ben Palmer, Joe Lane, Myles Bean and Adam Johnson all went over to amazingly make it a nine-point game with eight minutes to go, but former South man, Aley, landed a late penalty to clinch back to back wins for Stour.

Wharfedale secured their second home win on the bounce with a victory over Macclesfield in an entertaining National Two North encounter.

Wharfedale scored four tries in the first half through Sam Gaudie, George Hedgley, Oli Cicognini and Harry Bullough, with replies from Nicolo Nyemba and Sam Parry helping make it 20-14 to the visitors at the break.

A penalty from Tom Morton and Jordan Davies’ effort did give Macc a two-point lead early in the second half, but scores from Josh Burridge and Phil Woodhead – as well as three points from the boot of Jack Blakeney-Edwards – saw Dale home.

Otley secured their fourth win of the season after overcoming Sheffield Tigers in this all-Yorkshire affair.

Scores from Adam Malthouse (2) and a penalty try put Otley 21-17 up at the break, with the Tigers responding through Pete Swatkins, Greg Mellor and Joseph Duffy.

But, after a frantic first period, Otley crossed for the only try of the second 40 as Nazir Karim scooted over while Joe Rowntree came off the bench to land a penalty which sealed the visitors’ first victory in three matches.

Preston Grasshoppers suffered another agonising defeat after losing late on against Leicester Lions at TMDP Park.

First half tries from Rouban Birch and Alastair Murray gave the Lancashire side a 12-8 lead with Daniel Lewis scoring all of Leicester Lions’ points.

A Devon Constant try plus another eight points from the boot of Lewis put the Lions 21-12 up before Preston stormed back into this contest.

James Fitzpatrick and Birch both touched down to put the Hoppers three points ahead, but for the fourth time this season, Preston saw a potential victory snatched away from them in the final 10 minutes as Aaron Martin clinched a third win on the spin for a rejuvenated Leicester side.