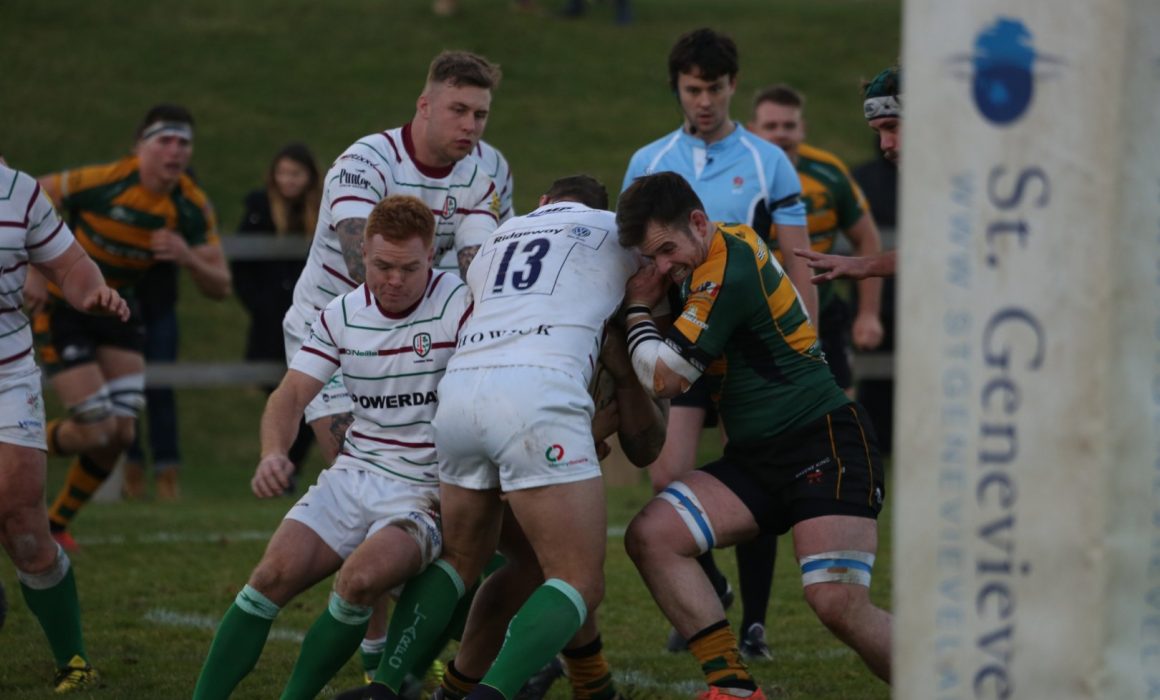 Following victories for Old Redcliffians and Wimbledon last weekend, the relegation battle in National Two South is starting to heat up with nine games left of the season.

Old Reds’ win over London Irish Wild Geese last Saturday means the men from Hazelwood are only five points clear of the drop zone so their clash against Barnstaple in Round 22, highlights another key fixture for Lee Starling’s side.

The aforementioned Old Redcliffians and Wimbledon face tricky fixtures themselves. The Bristol outfit host fourth placed Redingensians, whilst The Dons go to Henley Hawks. Fellow strugglers Clifton host Redruth and Broadstreet have a tough assignment as they visit Chinnor.

Matt Williams’ men will be aiming to get the job done at Kingsey Road against Street as they continue to put pressure on league leaders Cinderford, who take on Tonbridge Juddians.

Last week, Cinderford Director of Rugby Paul Morris admitted that his side are now favourites for the National Two South title and their recent victory over Worthing Raiders only shortened their odds to reach National One. Their 29-12 win last time out saw the Foresters hit the 100 point mark for the season and also they are now 10 points clear of second placed Chinnor following their 15th win on the spin.

Table Toppers Cinderford welcome TJs to their Dockham Road ground on Saturday for a 2.30pm KO in N2S #COUTJs

Next up for the league leaders is the visit of Tonbridge Juddians. TJs arrive in Gloucester on the back of a narrow defeat against Chinnor which ended an unbeaten run of six matches. The side promoted into this division back in April are having a wonderful campaign in National Two South and their standing in the league table highlights this. The men from The Slade are eighth and after running Chinnor so close last weekend, they will be aiming to do something similar at Dockham Road this Saturday.

Chinnor showed character last weekend to see off a stubborn Tonbridge Juddians side at The Slade. A piece of brilliant skill from Greg Goodfellow sealed the win for Matt Williams’ side, but they are now 10 points off second placed Cinderford with nine games to go. The Oxfordshire outfit will do all they can to keep the pressure on the table toppers as they remain on course for a top two finish this term.

A fourth win in five matches will move them a step closer to a shot at National One, but aiming to upset the applecart will be Broadstreet. The Midlands club currently occupy 15th place in the table and following a defeat against Redingensians last time out, Street now find themselves 13 points adrift of safety. Paul Hurst’s side are in the middle of a tough period in the season where they face three of the top four sides and anything they can claim at Kingsey Road this Saturday would be an added bonus. They may also look to take a leaf out of London Irish Wild Geese’s book who beat Chinnor at the start of the year.

Taunton Titans’ excellent run of form continued last weekend as they made it six wins from their last seven matches following a victory over Bury St Edmunds. It has been an excellent response from Tony Yapp’s side after a poor run of form at the back end of last year and now it looks as though a top three finish is most likely for the Somerset side.

They are 14 points off second placed Chinnor so it would take a remarkable collapse from the Oxfordshire side if Taunton were going to sneak a promotion place, but aiming to burst the Titans’ bubble are Canterbury this weekend. The City Men are desperate for a bit of consistency as they are currently going through their worst spell of the season so far. Two wins from their last eight matches has seen Andy Pratt’s side stay in the mid-table positions after a promising start to the campaign, but those two aforementioned victories have both come at the Marine Travel Ground in their last two home games. Can they make it a hat-trick of triumphs on their own patch this weekend?

Redingensians’ head coach Seb Reynolds was delighted to see his side return to winning ways last weekend after their victory over Broadstreet. Following three games without a victory, the Rams ended their mini-blip with a fine performance, especially from some of the players coming through at Old Bath Road. The Berkshire club remain fourth in the table which still emphasises how well they have performed this term and with nine games left to play, they will be eager to maintain their high standards.

They travel to Old Redcliffians this weekend and the hosts will be in a buoyant mood. Club stalwart Dan Fry told us last week that his side needed to gain a result against London Irish Wild Geese and the Old Reds did just that to leave them five points off safety. Scotland Lane is becoming something of fortress for the Bristol outfit as they have won their last three games at home which has given them a real chance of beating the drop. They are once again on their own patch this weekend and another triumph could see them edge close to moving out of the relegation places.

It’s been a busy week for Redruth, both on and off the field. The announcement that Brett Rule will be retiring from the club after a decorated career was followed by the return of Alex Ducker on loan from Hartpury, this all manifesting after the Reds’ excellent home win over Canterbury last Saturday. Pale Nonu’s side have been excellent at home this term which is one of the main reasons why they sit fifth in the table, but it is their form on the road which has held them back from pushing up the division.

Just two wins from ten matches on their travels for Redruth will have frustrated the men from the Recreation Ground, but they have the chance to add to their tally this weekend when they visit a struggling Clifton side. The hosts suffered a setback last Saturday as they were beaten by Wimbledon which keeps the Gloucestershire outfit in a relegation battle. Darren Lloyd’s side are five points clear of the drop, but with Redruth’s away form coupled together with Clifton winning their last two home matches, the Lavender and Blacks may be able to move away from the trapdoor once again.

Henley Hawks’ club website highlighted ‘costly errors’ as the reason for their loss at Barnstaple last Saturday. Pete Davies’ men had gone into that fixture on the back of successive victories, but the Hawks failed to make it a trio of wins as vital mistakes at crucial moments saw Barum claim the narrow win. Now, the sixth placed side need to dust themselves down and focus on the visit of Wimbledon as they look to complete the final stretch of this season in a positive manner.

The Dons travel to Dry Leas still believing their can pull off a remarkable escape. A narrow win against Clifton in Round 21 leaves Wimbledon 13 points off safety with nine games left in the season. The London-based side have won four of their last seven matches which has given them hope of avoiding the drop and their second away victory of the campaign could see them move off the foot of the table and increase the optimism around Barham Road.

Bury St Edmunds Pro-am rugby director Kevin Maggs stated last week that he has been pleased by the progress the Wolfpack have made this term. The former Ireland international joined the club at the start of the campaign and Bury currently find themselves in the top half and they will be aiming to secure a top eight finish for the second time in three seasons. Last time out, they were beaten by Taunton Titans, but the Suffolk side can take many positives from their trip to Somerset when they visit Worthing Raiders on Saturday.

It is now six straight defeats on the road for Ollie Smith’s side so they will be hoping that comes to an end at Roundstone Lane this weekend. The hosts, Worthing Raiders, will be targeting maximum points after a positive display against Cinderford last Saturday. Jody Levett’s side have faced all of the current top five since the turn of the year so the Raiders will be aiming for a strong end to the season, starting with a second win of 2018 this weekend.

There were reasons to smile this week for Barnstaple. Jarrard Hayler was in action for Saracens in their Anglo-Welsh cup match against Exeter Chiefs and his National Two South side also secured a hard-fought victory over Henley Hawks. Hayler would have been pleased to hear of Barum’s win last Saturday because they are now 11 points clear of the relegation places following back to back home triumphs and Steve Perry’s side now have a great opportunity to distance themselves further from danger when they go to London Irish Wild Geese this Saturday.

Since their victory over Chinnor, London Irish Wild Geese have really struggled. Lee Starling’s men have fallen to four defeats and frustratingly for the men from Hazlewood, two of them have come against sides in the relegation places. Due to those losses against Broadstreet and Old Redcliffians, Wild Geese are now five points clear of the drop and firmly in a battle for survival so they will be eager to claim a much needed victory this weekend.