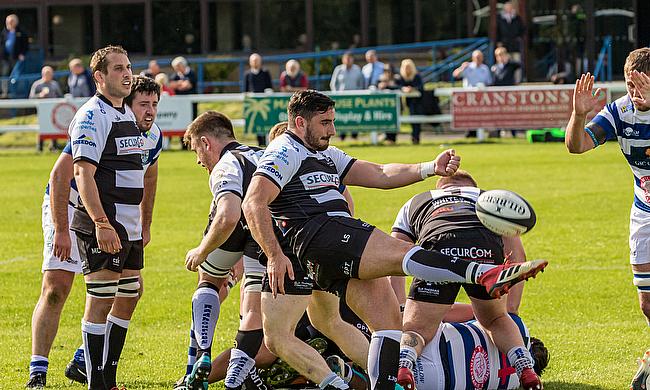 After a season away from National Two North, Luctonians made a winning return to the fourth tier as they defeated Tynedale in Round One. Photo Credit: (John and Barbara Austin)

Ryan Watkins’ side battled hard in the North-East and headed back down the M6 with an opening day victory.

There were also away triumphs for Fylde, Caldy and Sedgley Park on the weekend whilst a few surprise results occurred elsewhere.

Following relegation from National One, Loughborough Students began life at this level with a defeat as they were beaten by Stourbridge. Last year’s National Two play-off runners-up Chester also fell to a loss at Sheffield Tigers while newly promoted Hull suffered heartbreak as they drew with Huddersfield.

There was also an opening victory for Wharfedale who edged past Otley at the Avenue.

Scunthorpe, who were crowned Midlands Premier champions last season, did manage to secure a four-try bonus point in their first outing in this division since 2016/17.

A penalty from Paul Cook and a try via Tom Foster gave the hosts an early lead.

But converted tries from Tom Carleton and Tom Grimes, either side of another Cook penalty, put Fylde ahead.

The home side did produce a response as Cook dived over from close range to make it 20-14, but a flurry of tries from Connor Wilkinson (2), Carleton, Ben Gregory and Lex Botha gave Fylde a commanding lead at half-time.

Carleton grabbed a deserved hat-trick as last season’s second highest try scorer showed his class once again whilst Scunthorpe secured a bonus-point thanks to efforts from Ben Hyde and Oliver Cole.

After relegation from National One, Caldy kicked off life in National Two North with an excellent victory over Hinckley at Leicester Road.

The Wirral outfit controlled the scoreboard from start to finish to secure an opening day win in the Midlands.

The aforementioned Roberts also kicked nine points for the visitors while Hinckley’s only try came four minutes from time through No.8 Alex Tansley.

Stourbridge got the better of recently relegated Loughborough Students to begin the National Two North campaign with a victory.

The hosts led by four points at the interval with tries from Joe Heatley, Dan Rundle and George Morgan, whilst Dan Kelly and Will Kaye crossed for the Students.

Stour’s Nick Murphy and Loughborough’s Bamidele Fadahunsi exchanged scores at the beginning of the second period but the home side confirmed their winning start when Heatley grabbed his second try four minutes from time.

Sedgley Park recorded an opening day victory against Preston Grasshoppers as Scott Barrow’s reign in charge of the Tigers got off to the perfect start.

Ben Black touched down late on to confirm Sedge’s win at Lightfoot Green, but this contest was in the balance for most of the afternoon.

The visitors led 18-10 at the interval thanks to scores from Tom Coe and Jack Metcalf, whilst Steve Collins landed eight points.

Hoppers were actually in front during the first period following Tyler Sloane’s effort and the hosts cut Sedge’s advantage to just a single point after the break as Luke Proctor dotted down.

Jamie Harrison’s first try of the campaign gave Sedge some breathing space, but a penalty from Jake Squirrell kept the game finely poised on 53 minutes.

However, Preston could not add to their tally and Black’s try right at the death sealed a winning start for Barrow and Sedge.

Luctonians clinched a bonus-point win over Tynedale on their return to National Two North after a thrilling clash at Corbridge.

Tries from Will Roberts and Ben Bell, plus 13 points from the boot of Jake Rodgers, gave Tyne a 23-12 lead at the break.

Louis Silver and Frank Kelly went over for Luctonians in the first half and Rob Bengry added a third after the restart.

Lucts’ Rob Crowley and Tyne’s Guy Pike exchanged tries as the hosts held a slender advantage, but the away side hit back through Cameron Tawik to lead 31-30.

Rodgers’ fourth penalty looked to have sealed the victory for Tyne late on, but a last-gasp try from Crowley snatched the win for the newly-promoted Lucts.

Tries from Matt Speres and Rob Baldwin were enough for Wharfedale to seal an opening day victory over fellow Yorkshire outfit Otley.

Both sides had strong campaigns in 2018/19, but it was Dale who came out on top in matchday one thanks to two second half scores.

The hosts did trail at the break after Henry Roberts had crossed, but tries from Speres and Baldwin -either side of a Ben Smith penalty- saw the Greens home.

The Tigers led 15-12 at half-time following a double from Jamie Broadley and the accurate boot of Mark Ireland, while Chester were firmly in this contest thanks to two scores of their own.

Following the restart, Ireland’s kicking from the tee helped the home side extend their lead to six points before Henri Packard’s 100th try for the club gave the Tigers a cushion.

However, Chester mustered up a quick response to bring them to within a converted score of their hosts but despite the best efforts of Jan Van Deventer’s side, Sheffield Tigers stood firm to clinch a hard-fought and deserved victory.

Huddersfield led 8-3 at half-time as Will Milner’s penalty and try from Elliot Munnelly cancelled out Simon Humberstone’s early three-pointer.

How Hull RUFC were denied hard-fought win on their return to N2N as late Huddersfield try spoils the party – https://t.co/BT0pKNPPrk#HullRUFC #HullRugbyUnion @BealHomes

Latu Makaafi and Keane Naylor both crossed to put the visitors in front, with Humberstone also adding another penalty.

Huddersfield’s Ross Thornton then spotted a gap to cut Hull’s lead to just one point, but two more penalties from Humberstone gave the away side a 22-15 advantage with just six minutes remaining.

However, Gary Pearce’s men were to be denied a dream start to life back in National Two North as Alex Battye scored a converted try late on to rescue a share of the spoils for Huddersfield.