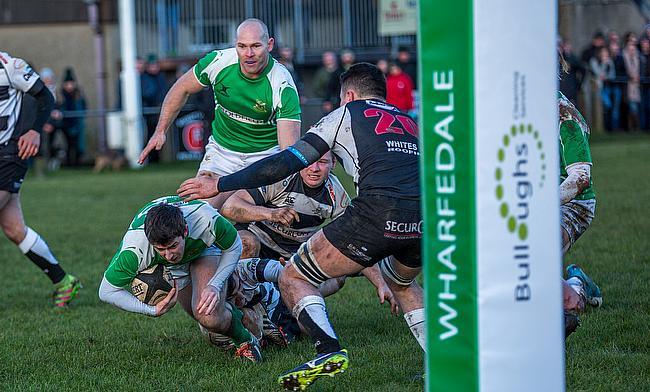 Both Macclesfield and Wharfedale produced gutsy performances to clinch huge victories in National Two North as teams continue to fight for safety.

Macc fended off a strong Blaydon display to seal back to back victories for the first time in 21 months while Wharfedale defeated Luctonians with 14-men as they begin mounting a survival challenge.

Also in the bottom half of the table, Otley were narrowly beaten by Chester while Sheffield lost heavily to third placed Stourbridge.

Stour moved back into the top three following the aforementioned victory, but they are still chasing both Hinckley and Sale FC who picked up victories in Round 17 while Sedgley Park continue to keep pace with the front-runners.

The only side in the top five not to secure a win in the opening weekend of January were Tynedale as they saw a first-half lead slip away from them as Huddersfield fought back to clinch the victory.

Hinckley ground out their first National Two North win of 2018 as the leaders beat Leicester Lions in difficult conditions.

The visitors remain four points clear at the top while the hosts stayed eighth.

Mitch Culpin went over for the opening try on 18 minutes after a cross-field kick from Tom Wheatcroft and scrum-half Joe Glover dived over from close range just before half-time.

Joe Wilson added the conversion to a first half penalty and he was also kicking the extras when James Martin crossed before Rhodri Tanner rounded off the bonus-point victory.

The hosts threatened on occasions during the game, but they were unable to break through.

Jamie Broadley’s try and 11 points from the boot of Mark Ireland put the Tigers narrowly ahead, with Sale responding through Jake Barron.

However, the visitors were to score 14 unanswered points after the break and they went in front through Arron Reed.

And Anthony Bingham’s try sealed a ninth consecutive win for Sale who remain four points off the summit with a game in hand.

Stourbridge moved up to third in the National Two North standings after an impressive bonus point win over Sheffield.

The Midlands side led 22-17 at half-time with the help of tries via Joe Heatley, Jack Lea, Tom Dodd and Niall Gibbons, with Dodd, Lea and Sam Montieri crossing in the second period.

Stour have now won their last three matches while Sheffield are currently six points from safety.

Sedgley Park avenged their defeat in the Midlands earlier in the season with victory over South Leicester at Park Lane to keep them in the hunt for a top two finish.

The hosts led 14-11 at half-time and the game continued to be tight, but Sedge’s clinical edge proved to be the difference as they sealed maximum points.

Matt Bebbington’s side are five points off second placed Sale, having played the same amount of games, while South remain sixth in the table as their patchy form continues.

Tynedale’s five game unbeaten run in National Two North came to an end as Huddersfield fought back to clinch victory at Lockwood Park.

Tyne did actually lead 17-12 at the breaks thanks to tries from Nick Carins and Will Miller, despite being reduced to 14-men on two occasions during the first half.

Austin Thompson and Nick Sharp crossed in the opening 40 for Field and the hosts produced an excellent comeback after the restart.

Huddersfield’s strength up front told as Sharp went over for his second, but Tyne nudged themselves back in front following a Miller penalty.

However, Harry Davey and Lewis Workman both darted over to wrap up the win for Gareth Lewis’ side while Tyne’s promotion hopes suffered a slight setback.

Chester held off a spirited Otley comeback to clinch their second home victory on the spin.

The Cheshire club, who have now picked up six wins at Hare Lane this season, took the lead through flanker Kyle Joseph.

And a score plus Guy Ford’s effort saw Chester carry a 22-7 lead into the break, with Otley responding just before the interval.

The Yorkshire side battled their way back into the contest with two scores in the second period, but they were only enough for a losing point.

Macclesfield came out on top against Blaydon as the Cheshire side secured back to back victories for the first time since April 2016.

Macc winger James Hampson went over not long after kick-off before Ryan Parkinson, Tom Morton and Tom Burden all crossed with Hampson dotting down again on the stroke of half-time to put the Blues 35-10 up.

Winners lounge at the CRT pic.twitter.com/Q4sNmBHWSM

Keith Laughlin and Dan Marshall had crossed for Blaydon in the first period, but three tries through Ben Stevenson, Jack Davidson and Jack Appleton got the hosts back into the match.

But scores from Dan Lomax and Parkinson ended their brave fightback as Macc picked up another crucial victory.

Wharfedale secured their third victory of the season as they beat Luctonains, despite being reduced to 14-men just 10 minutes into the contest.

Photos of yesterday's excellent win against @Luctonians can be viewed and downloaded at https://t.co/w1dRDZQGdp

Lucts’ points came via a Sebastian Robinson-Hall try and the boot of Sam Boxhall and the away side found themselves ahead after the restart as Louis Silver dotted down.

However, that was as good as it got for Ryan Watkins’ men as Oli Cicognini and Charlie Graham both crossed and Tom Barrett landed two drop-goals to seal a vital win for Dale in their bid to beat the drop.