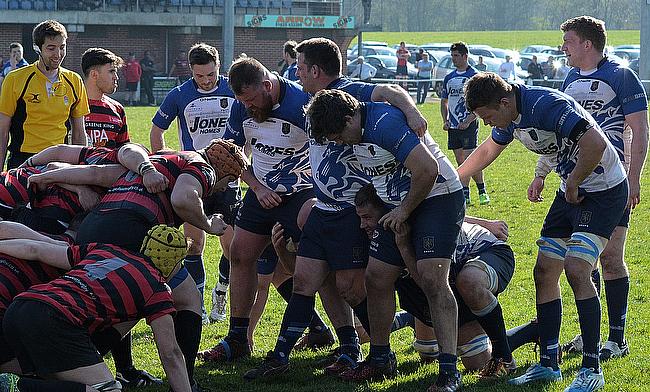 Sale FC will look to remain on top of National Two North this weekend by securing their fourteenth straight victory when they take the short journey to Macclesfield.

Sale are four points clear at the summit and have not been beaten since October, but looking to end their superb form will be Macc.

Second placed Hinckley will be ready to pounce if Sale were to slip up in Cheshire, but George Chuter’s men will first and foremost have to get their job done away at Sheffield. Elsewhere, promotion candidates Stourbridge, Sedgley Park and Tynedale take on Leicester Lions, Luctonians and South Leicester respectively.

Meanwhile, Wharfedale will be aiming to continue their revival at home to Huddersfield while Blaydon visit Chester desperate for a win and Sheffield Tigers go to Otley.

It was another significant result in the season of Sale FC last weekend. A commanding victory over promotion contenders Tynedale kept Jonathan Keep’s side on top of National Two North and maintained their wonderful run of form. Sale head into their derby clash with Macclesfield this Saturday having won 13 games on the spin and after missing out on promotion to National One last season, they are firmly on course to take the next step this term.

In terms of Macc, they received some bad news this week. Their development plans for Priory Park have been refused had reportedly the future of the club ‘hangs in the balance’.  This is a disappointing blow for the Blues, but they are sure to remain focused on matters on the field as Marshall Gadd and his side continue their revival. Despite a setback at Sheffield Tigers last week, Macc have won four of their last seven games which leaves them 11 points clear of the drop and a result against a flying Sale side this weekend would be a great outcome for the Cheshire outfit.

Hinckley produced an excellent response last Saturday following their defeat to promotion rivals Sale FC. A professional display against South Leicester was the perfect reaction by George Chuter’s side who remain second in the table and four points off Sale heading into this weekend’s clash with Sheffield.

The Hornets will be aware that the three teams directly below them all have games in hand so a seventh win from their last eight away fixtures will keep them firmly in the hunt for a top two finish. As for Sheffield, another loss on the road last weekend put their survival bid on hold. A 24-5 defeat at Chester means the Yorkshire outfit are now five points from safety, but they are back at Abbeydale Road this weekend where four of their five wins have come this season so they will be out to upset the odds on Saturday.

Stourbridge were able to move up to third place in National Two North following their hard-fought victory away at Huddersfield. The Midlands club have been superb in recent weeks and having suffered a drop in form in November, Stour have their swagger back. Just one defeat from their last seven matches leaves Neil Mitchell’s side just two points off Hinckley with a game in hand and they will be oozing confidence when they host Leicester Lions this weekend.

Leicester Lions will head to Stourton Park feeling fresh after their home fixture with Luctonians was postponed last Saturday. After the departure of Jack Heald at the start of the year, Andy Key is back at the helm at TMDP Park and the former Rotherham Titans head coach will be aiming to get the Lions roaring again. Leicester are currently ninth in the table and they have won just two of their last eight matches so a result against Stourbridge this weekend would certainly be a morale booster for Key and his side.

Sedgley Park were left frustrated last weekend as their fixture with Otley was postponed just 30 minutes before kick-off at Park Lane. On the flip side, Matt Bebbington’s men will be feeling revitalised ahead of their trip to Luctonians as they look to continue their march towards the promotion places. Sedge are currently fourth in the table and they are six points behind Hinckley with two games in hand meaning the ball seems to be in their court.

It's busy this weekend, with the Ones at Home to Sedgley Tigers RUFC preceded by the Threes hosting Hereford… https://t.co/dzdOJjVbDz

However for them to stay in control of their own destiny  they must continue to add to their run of four straight wins when they visit Luctonians this weekend. The Lucts were also not in action in Round 21 following their postponement against Leicester Lions and with that; they remain at the foot of the division. But, head coach Ryan Watkins feels his side are moving in the right direction and the men from Mortimer Park are more than capable of digging themselves out of trouble. Luctonians are just five points from safety with three games in hand so just a second win in 14 matches could leave them on the cusp of the safety spots in National Two North.

It was a weekend of setbacks for Tynedale coach Scott Lawson last Saturday. Having been in a much fancied Scotland squad to beat Wales in the Six Nations, Gregor Townsend’s outfit suffered a defeat in Cardiff and Lawson’s National Two side also found themselves on the wrong end of a result against Sale FC. A defeat to the league leaders is nothing to get too disheartened about because Tyne are still very much in the promotion picture, but if they do harbour ambitions of reaching the top two, they cannot afford too many more slip-ups.

Tyne are currently on a run of three wins and three defeats and those aforementioned victories have all come at Corbridge where they host South Leicester this weekend. The visitors come into this game looking for a first triumph for just under a month as they aim to reignite their season. The Midlands club know they will be losing coach Richie Williams to National One side Cambridge next year, but South will want to end this current campaign strongly after picking up just two wins since November. Can they become only the second side to beat Tynedale on their own patch this term?

Huddersfield Head Coach Gareth Lewis admitted his side were ‘overpowered’ following their defeat against Stourbridge last weekend. The Yorkshire outfit slipped to their third loss in five matches since the turn of the year, but this blip in form won’t take the shine off a wonderful campaign for Field so far. Lewis has guided his side to sixth in the table which is a superb achievement after promotion last April and they will be keen to return to winning ways when they visit Wharfedale this Saturday.

However, this is easier said than done because despite Dale sitting just above the relegation zone, they are a side bang in form. A dominant scrum in a crucial match against Blaydon last Saturday helped Wharfedale clinch their third win on the spin which led to them moving four points clear of the relegation places. James Doherty said his side were frustrated they didn’t earn a bonus-point, but at this stage of the season, the victories are the most important thing. Dale will be without their coach for the next month as he is undergoing surgery on his ankle so they will be hoping to continue their revival in his absence.

It was yet another home win for Chester last Saturday. A convincing victory over Sheffield was their eighth triumph at Hare Lane this term and the win keeps them firmly in mid-table as we begin the final third of the season. Overall, the Cheshire side have won 10 games this term which highlights just how successful they have been on their own patch and they will be keen for that to continue when Blaydon come to visit in Round 22.

Blaydon suffered a setback last weekend. A defeat at home to Wharfedale was the Crows’ sixth loss on the spin which leaves them four points adrift of safety heading into this fixture with Chester. The North East side do have a game in hand over 13th placed Dale, but they will be eager to start putting together some positive results in what has been a very tough season for Blaydon otherwise back to back relegations could be on the cards.

Sheffield Tigers coach Jamie Broadley described their win over Macclesfield last week as a mixture of pride, relief and physical pain as the Yorkshire side picked up a welcome victory. Their win at Dore Moor in Round 21 was the Tigers’ first triumph since November and it was much needed after nine straight defeats. The 11th placed side will now be keen to secure back to back wins when they take the short trip to Otley this Saturday.

After a tough few months we were finally able to marry the effort with the details we needed. Hugely attritional game. Thanks to all who braved the conditions to support. Happy mix of pride, relief and physical pain today. Season back on track ?↗️ https://t.co/UTQkKN0sEt

The home side will come into this clash feeling energised after their game with Sedgley Park was postponed last week. Otley were left frustrated as both sides wanted to play, but the referee called the game off at Park Lane so Peter Clegg’s men will be fired up to return to action in Round 22. The Yorkshire outfit are going through a good spell having won five of their last eight games and with them being 10 points clear of the relegation places, Otley will be eager to continue moving in the right direction.