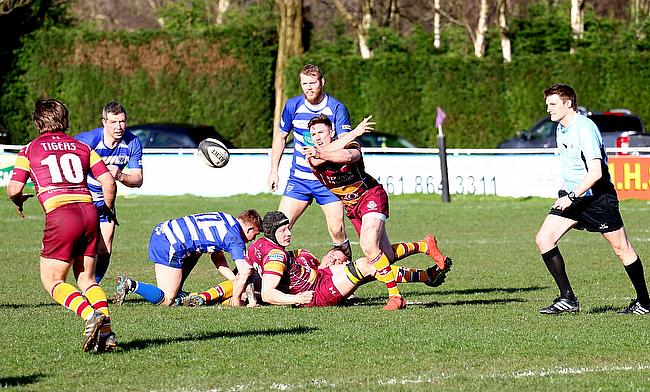 As expected with the final round of fixtures before the Christmas break, there are some tasty looking in National Two North as teams look to end the calendar year on a high.

After defeat last weekend, league leaders Hinckley will be aiming to complete December still on top of the tree when they host Huddersfield because there will be a number of clubs who will be looking to steal pole position off the Midlands club in 2018.

Also this weekend, it is second against third in National Two North as Sale FC host Sedgley Park while Tynedale return to action against Blaydon and Stourbridge go to Luctonians.

Elsewhere, there are local battles in Leicester, Sheffield, Cheshire and Yorkshire this weekend as the usual derby Christmas matches take place.

Hinckley tasted their first defeat in eight games last weekend, but the National Two North league leaders will be hoping to end a fantastic year on top of the this division when they welcome Huddersfield to the Midlands. George Chuter’s side currently sit three points clear at the summit despite falling to a late defeat against Chester and after tense performance in their last victory over Wharfedale, Hinckley will be aiming to return to their brilliant best this Saturday.

But, the visit of Huddersfield will not be straightforward. 2017 has been a wonderful year for the Yorkshire side as they won promotion back into National Two North and since then, Field have not looked back. They enter Round 16 seventh in the table and they have won their last six matches to move themselves into the top half. It has been a superb rise for Huddersfield and they are more than capable of extending their winning run this weekend.

We have a northwest Christmas cracker in store this Saturday as second placed Sale FC entertain promotion rivals Sedgley Park. The hosts jumped into the top two at the start of the month following their seventh consecutive victory and they are now just three points off league leaders Hinckley heading into the final fixture of the year. It has been a very positive last 12 months for the Manchester-based club despite play-off heartache in May, but Jonathan Keep’s side have reacted brilliantly to that disappointment and they are on course again to challenge for a place in National One.

This Saturday is our #familyday at #salefc come on down and watch a top game of rugby and stay for drinks and pizza for the kids after the game. pic.twitter.com/LqiJXhYwYj

Sale have lost just one of their last 23 home league matches, but Sedgley Park travel the short distance to Heywood Road having won seven of their last nine games. Even though there was a change at the helm with Matt Bebbington coming into the club at the beginning of the campaign, Sedge are once again producing a strong season and they are just two points behind Sale coming into this clash. Bebbington has continued to guide Sedge in the right direction and a win this Saturday would be a huge statement in terms of their ambitions for 2018.

It has been a frustrating couple of weeks for Tynedale. Scott Lawson’s men haven’t played a National Two North fixture since the start of the month due to successive postponements against Stourbridge and Wharfedale, but they will be hoping the recent bad weather won’t rear its head once again when they face near neighbours Blaydon this Saturday. With Tyne not in action, they have moved down to fourth in the division, but they have two games in hand which could see them go to the top of this division if they are successful in both.

The men from Corbridge are only six points off Hinckley as things stand, but first they must negotiate this fixture with Blaydon. Matt Thompson’s side will just want to close the book on 2017 because it has been a difficult year for the Crows. Relegation from National One has been compounded by a tough first half of the season in National Two North and Blaydon enter this local derby 11th in the table and just four points ahead of the drop zone. They have won just one of their last six matches so victory this Saturday would be the perfect early Christmas present.

There might have been a sense of relief at Stourbridge last weekend. After a run of four games without a win, Neil Mitchell’s side clinched a welcome victory over Macclesfield to keep them in the promotion hunt. Nine straight triumphs to begin the campaign was a superb start for Stour, but after a tricky spell, they will be hoping to recapture their early season form in the second half of the term as they aim to keep pace with their rivals.

Stour are fifth in the table as things stand, but they are just six points off league leaders Hinckley heading into this match with Luctonians. In contrast, the Lucts slipped into the bottom three last weekend as they suffered a potentially vital blow against Otley. Ryan Watkins has been open with his side after their eighth loss on the spin and he has admitted things need to change quickly. One positive the Kingsland side can take is that they are only in the relegation places on Points Difference, but a win in front of their own supporters this weekend will be a massive boost for the Lucts.

There will be no early Christmas cheer for 80 minutes between South Leicester and Leicester Lions when the two Midlands sides meet at Welford Road this weekend. South earnt the bragging rights in this local derby in September and so far, they are on course to be the top team in Leicester in National Two North. South currently sit sixth in the table and have lost just one of their last five games heading into this derby.

The hosts will also be fresh heading into this pre-Christmas clash as their game with Blaydon was suspended last weekend while Leicester Lions visit their neighbours with some momentum behind them. Head Coach Jack Heald told us in the week that it is a building process at Westleigh Park and his point his emphasised by the season the Lions have had so far. As thing stand, they are eighth in the table following seven wins from their last 10 matches, but they did lose their first four games of the campaign. It seems that they have now put their tough start behind them and derby day revenge would be an extra special gift for the Lions at this time of year.

From Leicester to Sheffield we go as the top two rugby union sides in the Steel City come together at Abbeydale Road this weekend as Sheffield Tigers visit Sheffield. The two clubs are separated by approximately two miles, but it is the Tigers that sit higher in the table as things stand. The men from Dore Moor are ninth in the division, but Jamie Broadley’s side will be keen to enter the Christmas break by ending a run of four straight defeats.

The Tigers had won five successive games before this run and Sheffield will be looking to exploit their dip in form this weekend. The hosts have won two of their last three games to really ignite their season following promotion in April and now Adam Byron’s side are just three points from safety heading into the final match of a successful year for the club. Sheffield were narrowly beaten by their city rivals back in September so they will be keen to claim back the bragging rights before the start of 2018.

Chester’s eye catching result over Hinckley in Round 15 grabbed the headlines last weekend as the men from Hare Lane produced another strong performance in front of their own supporters. The Cheshire side toppled league leaders Hinckley to claim only their second win since the start of November so Chester will be eager to make back to back victories when they visit Macclesfield this Saturday.

The away side are 10th in the table and they are 11 points clear of their hosts who have really struggled so far this term. After relegation from National One in April, Macc have not been able to get going in National Two North and as a result, they are only outside the bottom three of ‘Games Won’. The Blues have also had a change in coach with Giles Heagerty departing and Marshall Gadd coming in on an interim basis, but Macclesfield showed some positive signs in last week’s defeat to Stourbridge which they will be hoping to carry into this weekend as they aim to end a run of one win from their last 10 matches.

It might have felt like Christmas had come early last Saturday for Otley who picked up a potentially crucial win against relegation rivals Luctonians to move out of the bottom three. Peter Clegg’s side were excellent at Mortimer Park as they bounced back from a disappointing defeat to Sheffield and they end a vital month in their season against another side at the wrong end of the table, Wharfedale.

Dale are bottom of the division as things stand, but they will be fresh when they travel to Cross Green after their game with Tynedale was called off due to the weather last Saturday. James Doherty’s side are seven points from safety and they do have a game in hand so it is far from over for the Greens just yet. Wharfedale were unfortunate not to claim their third win of the campaign against league leaders Hinckley two weeks ago, but a similar performance tomorrow could see them enter 2018 with some real belief that they can dig themselves out of trouble.